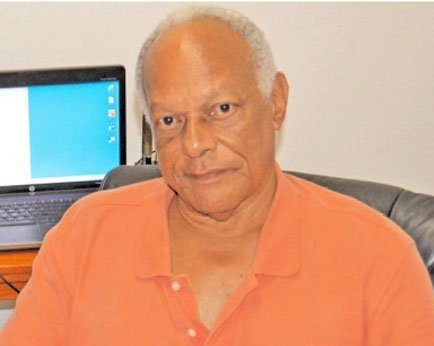 Former Prime Minister Tillman Thomas has led Grenadians in paying tribute to one of the island’s better broadcasters in recent years, George Grant who died on Monday in his apartment on Woolwich Road in St. George.

In a message posted on Grant’s Whatsapp chat group, the former Political Leader of the National Democratic Congress (NDC) called for the popular “Sunday’s with George Grant” programme to continue and not left to die.

“He was independent and was not afraid to address the issues that concern us as a Nation,’ said the ex-Prime Minister.

Grant was laid to rest on Wednesday morning in an unmarked grave at the Grand Bras cemetery in St. Andrew in accordance with his wishes that were communicated before his passing to local funeral home, Otway/Bailey on the Carenage.

Burke said: “His (Grant) was an unyielding commitment to journalistic integrity and fair play. A monumental loss indeed. May his soul rest in Perfect Peace”.

Another of the island’s former political leaders to express condolences on the passing of the veteran broadcaster was Dr. Terrence Marryshow, who once headed the now defunct Maurice Bishop Patriotic Movement (MBPM).

Dr. Marryshow posted: “Wow! Here today gone tomorrow! It is indeed shocking and to wake up to this sad news. His love and concern for Grenada were always evident and his unique style and voice on the airwaves especially on Sundays would be greatly missed. My deepest condolences are being extended to his family, friends and the media fraternity. He definitely made his mark and may he rest in peace”.

Current Chairman of the Congress party, Terrence Moore also paid glowing tribute to the legacy left behind by the independent broadcaster who returned from Canada over 30 years ago to live permanently in his homeland.

Moore said: “I am saddened by this news, not only for his family but for Grenada as a whole. He was a voice of calm rationality in our development dialogue. Hope his legacy lives on, and someone can take up this challenge”.

Attorney-at-law Ruggles Ferguson who was Grant’s private lawyer paid tribute on the Chat Group to the man whom he has represented in legal matters over the years.

The former President of the Grenada Bar Association (GBA) recognised Grant’s service to humanity and labelled him as one who was “hardworking, principled, balanced, passionate, unselfish and committed to the building of a new Grenada”.

According to Ferguson, the broadcaster has left us after a “job well done”.

The man who still holds the post of Commissioner of Police Wilan Thompson expressed his “deepest condolences” to the family of Grant and viewed his passing as “a very crucial loss at this juncture”.

President of the Public Workers Union (PWU), Rachael Roberts described the late Grant as “a person who conducted his affairs in a principled and structured manner” and one who also did his job “always with fairness”.

Roberts said: “He (Grant) was just in all his dealings with people. Grenada has lost a true patriot. He loved this little piece of rock in a very special way. His concern was always (to) see Grenada progress. When we speak of love for country that was Br. George Grant”.

The female PWU boss touched on the assistance given over the years by the broadcaster to the local trade union movement.

“…I am so sad words cannot describe how I feel at this moment. He was a true friend of the Trade Union Movement. Labour will miss him greatly. The Public Workers Union would miss him greatly. I love you Bro. George Grant. Without any question or complain we called and he answered and went to (the) extra mile to help. He never asked for money, he never asked for favours, he asked nothing but went out of his way to provide the service requested.

“Bro. George came to our aid at a moment’s notice. He would always say what he felt when we were on the wrong or the right path, he would scold us or support us. He helped us unconditionally. He had a wonderful way with words – he spoke it truthfully and diplomatically.

“I will greatly miss Bro. George Grant. The Trade Union Movement will greatly miss Bro. George Grant. Bro. Grant may your sweet soul rest in peace. You are gone but trust me we can never forget you. I will never forget. You were a hero to media – an honest, kind, sincere, outspoken, diplomatic and classy media hero. We loved you in the Trade Union Movement, I loved you Bro. Grant. Rest in Peace. Gone but will never be forgotten”.

Another frontline political figure on the island to pay tribute to the legacy left behind by Grant was Terrence Forrester who was once associated with the ruling New National Party (NNP) government of Prime Minister Dr. Keith Mitchell.

Forrester who is now a member of NDC said: “What a great loss to the media fraternity and indeed to the furtherance of Democracy in Grenada. He made his mark and gave of his best”.

Brothers Vincent and Kennedy Roberts who are associated with the Congress party and took part in Grant’s Whatsapp chat group also joined in recognising the contribution of the veteran broadcaster over the years.

Vincent Roberts chipped in, “He(Grant) loved Grenada and democracy” while his younger brother Kennedy Roberts remarked: “We will all look back at the many conversations we had with GG and wish we can have just one more. We will all ask the question – why he had to go? But he played his role with conviction and purpose, and has set a path to trod, for all of us. May his soul Rest In Peace”.

One of the last media persons on the island to be in contact with Grant before his sudden passing was Raymond Roberts, the former head of the Government Information Service (GIS).

Roberts said: “My last communication with George was in the early hours of Monday morning and he replied at 5.45 a.m. My tears are plenty, recalling last year he read a letter to me (that he gave to) Otway Bailey Funeral Home on what should be done with his body upon death”.

Female journalist Cherriann Blackman offered the following tribute: “May your soul rest in eternal peace George. May your family be comforted during this period of mourning. I will definitely miss your calls checking up on me. You made a huge difference in the local media. What a loss”.

One of Grant’s closest friends was playwright Ricky Keens-Douglas who offered the following tribute: “He will be missed. What a loss to the broadcasting world. RIP my friend. We will always think of you. GEORGE. Condolences to the family”.

Another person on the Whatsapp Chat group who goes by the name of JEL who only came in contact with Grant in recent months recalled: “I met GG in person for the first time just over a year ago, though I have been following his programmes long before. I was struck, in fact overwhelmed, by his fair mindedness and humanity. Those were my takeaways from my interaction with a man I have grown to have immense respect for. Heartfelt condolences to his family and dear friends. May his legacy live on while he rest in peace”.

The many tributes included one from another local playwright Christopher DeRiggs who held Grant in very high esteem.

DeRiggs wrote: “This is a heavy loss. He was the pioneer for talk radio in Grenada, a courageous media professional who suffered for his single minded mission to uncover the truth. His journalism was almost like a priestly calling. His voice resonated patience, reason and balance.

“I can see him walking up Lucas Street with his bag of groceries in hand projecting a quiet pride and humility. We are all richer for having been in his zone and interacting with him. His death will leave us feeling profoundly diminished. How do we come to terms with such a loss? May he Rest In Peace”.

The glowing tributes paid to Grant was best summed up by social activist, Jude Bernard who said: “His passing will leave a definite void”.