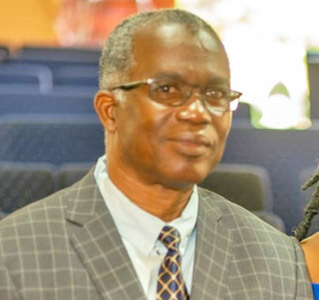 Speaking to THE NEW TODAY on Monday, Modeste said that once the conditions are right he expects Peters to make a throw further than what Zelezny did in 1966 at a meeting in Germany.

Twenty-four year old Peters retained the Javelin world title at the World Athletics Championship in Oregon last weekend with a throw of 93.07 metres to leave his strongest competitor Neeraj Chopra of India in second place.

According to Modeste, it should be noted that in all recent competitions, Anderson Peters was able to throw the Javelin at 90 plus metres on average.

“If you look at the competition that he won there (World Athletic games in Oregon), look at the height of the Javelin and how the Javelin lands. Anytime there is a slight wind behind him you will get the Javelin to flatten out and anytime that Javelin flattens out it is going to go over 98 metres,” he said.

Anderson Peters had picked up an injury which resulted in him having to undergo surgery which hampered his performance at last year’s Olympics games and resulted in him not making it into the finals.

On Anderson Peters exploits in javelin, the former Assistant Commissioner of Police (ACP) in the Royal Grenada Police Force (RGPF) said: “He is the most outstanding athlete in Grenada in my opinion. He did something that nobody else in the world has done in track and field – he has thrown over 90 metres – the landmark distance three times. He is the only person to ever do that in a competition.”

Modeste also pointed out that Anderson has achieved the 90 metre mark some seven times for the year already, which puts him in a class all by himself.

He is confident that the top Grenadian javelin thrower will throw another 90 metre distance at the Commonwealth Games this week in Birmingham, England where he is representing the Spice Isle.

The former Grenada record holder in javelin is not surprised at Anderson’s exploits on the world stage as Grenada produced top javelin throwers at the OECS level since the 1960’s and 1970’s.

He said the foundation in the sporting discipline was laid several years ago by other javelin throwers and pointed at OECS winners in the junior and senior CARIFTA Games, such as former GBSS student Eros Rapier of Grenville, St Andrew’s and himself.

According to Modeste, Anderson’s current coach is Paul Phillip who used to be one of his own students and trained alongside him back in those days.

Modeste described Paul Phillip as a very dedicated coach who helped to produce successful javelin throwers on the island based on a programme that has now been put in place.

He also alluded to the socio-economic development of Grenada, in which many youngsters grew up pelting at mangoes, coconut trees and all other fruits which helped to develop the muscles.

“That’s the foundation,” he quipped.

Modeste stressed that most youngsters in Grenada are natural athletes when it comes to throwing the javelin.

“Let me tell you – all young boys (grow up) pelting. If you tell them to pass a block they are heaving the block. They take a space, they (are heaving it) in construction – all those things build muscles. If you go in the garden as a young fella, you want to fork and the cutlassing again strengthens the arms and shoulders to do those things – you either throw javelin, discus or you throw shot put,” he said.

The former top athlete also cited Grenada’s hilly terrain as the ideal place for athletes to develop the type of physical body, including a big thigh and to build on the muscles to throw the javelin.

Modeste called on the government to put the necessary structures, including equipment in place, especially at the Training Facility at La Sagesse in St. David and the island will “pour out” more Anderson Peters to compete on the world stage.

“It is not only he (Anderson Peters) who has the talent – Carriacou has it too,” he said.

Modeste recalled that when he was stationed as a policeman on the sister isle he trained several young athletes there that all went to the CARIFTA Games and brought back medals in javelin.

“What you have to understand is that what Finland is to the world and Europe, is what Grenada is to the Caribbean in javelin throwing,” he remarked.

He said that Grenada has won the most javelin competitions in CARIFTA Games than any other island.

“The javelin is our most outstanding event,” he added.

According to Modeste, he has a very close relationship with Peters and from time to time he sends up some of his agro-processing products for him, such as mango chips, banana chips and soursop.

“They are coming down after the games in England and they (are) stocking up again and going back to Europe,” he said.