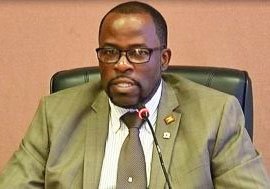 Sen. Garraway – still maintains his position as a member of the government

Government announced Tuesday that Education Minister Emmalin Pierre would be the new Minister for Information, less than two months after Sen. Garraway was accused of assaulting a female journalist who had been granted an interview by Tourism Minister, Dr. Clarice Modeste-Curwen.

In reacting to the news of Garraway’s removal, Ferguson said, “I think that his behaviour has been very embarrassing to the country, to the government and I think it would be untenable for him to continue in that position.

Grenada has one of the highest percentages of women in Parliament in the region, an important benchmark under international conventions related to women in positions of power.

The allegation of assault made against Garraway came after he attempted to prevent Farrier from conducting an interview with Modeste-Curwen, a senior member of the Cabinet.

Modeste-Curwen had consented to the interview when Garraway instructed her not to proceed, overriding her protests at his interference. Ferguson, who has written letters on the issue, including one addressed to Minister Modeste-Curwen, described the Junior Minister’s conduct as “atrocious”.

Ferguson referenced a statement issued by Climate Change Minister, Sen. Simon Stiell shortly after the incident, which spoke of government’s commitment to press freedom, while announcing an internal investigation had cleared Garraway of any wrong doing.

This Ferguson said is the crux of the matter since Stiell’s statement seemed to imply that there was nothing wrong with a senior female minister being overruled in such a disrespectful manner by a junior male minister.

“A minister of twenty years agrees to grant an interview and up comes this upstart behaviour towards a senior minister who seemed incapable of doing anything to defend herself,” said Ferguson.

“This is just window dressing. He (Sen. Garraway) should have been fired immediately or at the least a public apology. We seem to have a little machismo club among our Parliamentarians,” Ferguson said in reacting to the Garraway removal from the Information portfolio.