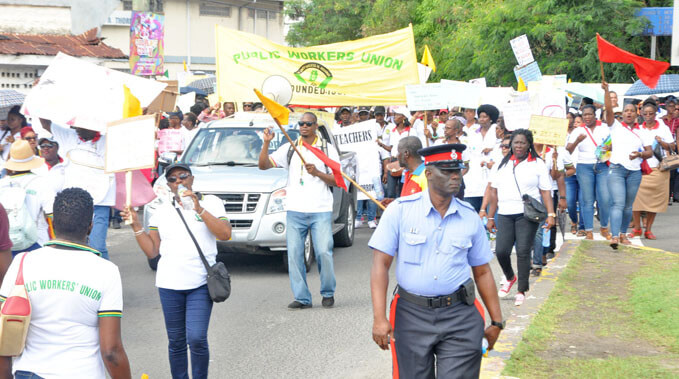 File photo of members of the Public Workers Union taking to the streets of St. George’s to stage a protest on the pension issue

Workers in Grenada are seemingly losing faith in Trade Unionism on the island.

According to General Secretary of the Grenada Trade Union Council (GTUC), Bert Patterson, even the Executive committee of the body is experiencing difficulties in getting sufficient members to attend meetings.

Patterson made the disclosure in presenting the report of the Management Committee of the council for the period covering April 13, 2019 to March 26, 2021.

He told delegates, “We cannot as Executive when reporting to our Principals (you the Convention) only report the good work, and therefore I take no pleasure in reporting that during this term on multiple occasions our Management Meetings could not form a quorum.”

He went on: “However, on those occasions where time sensitive decisions were made, we have had to make those decisions in meetings that are not quorate.”

During the recently held election for executive positions on the Public Workers Union (PWU), more than half of the membership did not cast ballots.

Newly elected President of the island’s largest public sector union, Brian Grimes told THE NEW TODAY that this was one of the issues that he intends to address as a matter of priority.

Patterson also told delegates that the TUC is still in dire financial straits with two of the members considered as not in good financial standing and cannot take part in proceedings of the parent body.

He said: “Finance has always been a disappointing topic for the GTUC and it must be indicated that although not worse than reported at previous Conventions it is still not good as we have two (2) Unions that are still outstanding with fees and dues owed to the GTUC resulting in them not being able to participate in this Convention.”

The General Secretary did not identify the two unions.

However, THE NEW TODAY understands that some unions have been refusing for years to pay certain fees instituted by TUC to be part of the membership of the umbrella body.

On a brighter side, Paterson reported that a number of local trade unionists have been able to profit from some crash courses organised by the Cipriani Labour College in Trinidad & Tobago on the initiative of TUC President, Andre Lewis, the current President General of the Technical & Allied Workers Union (TAWU).

He said that several trade unionists “have been exposed to high level crash course training in leadership and trade unionism which took place in February last year to coincide with the GTUC anniversary celebrations”.

“At present at least twelve (12) Union Leaders and activists are engaged in Tertiary Online Courses in Human Resources, Industrial Relations, Management Safety and Health among other topics with the Cipriani Labour College,” he added.

On the annual Labour Day celebrated which is held May 1, Paterson told delegates that nothing has been finalised given the current uncertain state of affairs in the country due to Covid-19.

However, he dropped hints that it might be “a more elaborate affair” than last year when everything had to be done virtually.

In the report, the TUC General Secretary said: “May Day 2020 was the first in more than 60 years that May Day could not be celebrated in the traditional way we have grown up on and love with march, rally and fete all of which signifies togetherness of the Labour Movement. This was all due to the Pandemic and the restriction imposed on it.

We did celebrate by virtual means which was successful and unless there is a radical improvement in the health security situation it is most likely that the celebration will for the second year be on a virtual stage and platform.

Plans are in place to make a more elaborate affair than last year as on that occasion there was no road map considering the sudden and novel encounter with the Pandemic.

Final announcements will be made at a date closer to the activity when all unknowns relating to public gatherings are known.”