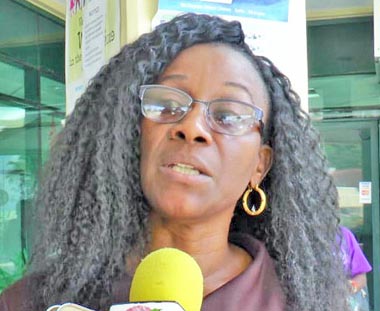 The clash that took place last week between current Chairman of the governing Council at the T.A Marryshow Community College (TAMCC), Augustine Vesprey and President of the Public Workers Union (PWU), Rachel Roberts centered on the tertiary institution’s failure to provide the workers’ bargaining agent with a copy of the agreement that was struck to end protest action taken by employees.

THE NEW TODAY understands that Roberts was not happy with what she regarded as “dragging of the feet” by the council on providing the union with a corrected version of the six-page agreement.

Workers at TAMCC took industrial action in the face of non-payment of increments amounting to EC$6.1 over a 6 year period.

According to a well-placed source, the PWU was not happy with the wording of some aspects of the agreement and requested that some relevant changes be made.

One of the issues that the union was insisting on is the holding of a convocation when TAMCC re-opened on the first day in the second semester on January 6 where workers could have a frank and open interaction with senior management and council members on a number of burning issues.

The source said that a critical issue of concern for workers centered on reports that the council was seeking to bring back on the payroll a retired lecturer who has been officially complained about in matters involving sexual harassment at the workplace.

The agreement also called for a think tank to be established for TAMCC professionals so as to assist them with addressing college issues.

As a public service, THE NEW TODAY reproduces in full the document giving specific details on what the parties involved in the TAMCC matter had agreed to implement:

The Employer and the Unions are hereinafter referred to as “the parties”.

WHEREAS the Unions engaged with the representatives of the Employer with respect to payment of outstanding increments to members of the Unions for the period 2013 to 2018.

AND WHEREAS the Employer has given a commitment to the payment of the outstanding increments from 2013 – 2018;

AND WHEREAS the parties met at the T. A. Marryshow Community College (TAMCC) and agreed that the payment of such increments be made by tranches;

AND WHEREAS the Unions have agreed and accepted that the first tranche be made in the sum of one million, seven hundred and fifty thousand dollars (1.75M) to be paid on or before December 30, 2019 and the balance be calculated and paid subsequently;

AND WHEREAS for the furtherance of the management of the T. A. Marryshow Community College the Unions proposed administrative and nonfinancial issues to be addressed;

AND WHEREAS the Employer agreed to take the necessary measures to address the administrative and nonfinancial issues;

BE IT RESOLVED that the parties have agreed as follows:

ARTICLE 1 -This Agreement is made in furtherance to payment of outstanding increments to members of the unions for the period 2013 to 2018, and to reasonably and practically address administrative and nonfinancial issues critical to resolving these issues;

It is hereby agreed that the employer shall afford payment of the outstanding Increment:

Section 1: That a think tank be established for college professionals so as to assist them with addressing college issues.

Section 2: That there be absolutely no reprisals from management regarding the act of industrial action that staff through their Unions was apart off.

Section 4: Employees above the retirement age of sixty-five (65) years

Section 1: That a convocation to be held when school re-opens on the first day in the second semester, January 6th 2020, where the work force can have its customary interaction with senior management and council.

Section 2: That a policy regarding meetings/department meetings be established where staff can plan as a body how to recuperate and address the teaching learning process adequately.

Section 2A: That there be Regular meetings by Schools so as to foster communication and a degree of inclusion among stakeholders.

Section 3: That there be a yearly Rotation of Deans, Associate Deans and Chairs with the objective of improving Schools and motivation within departmental.

Section 3A: That the payments of allowances provided in Compensation Package (a reduced teaching workload and allowances) for the administrative function of Deans, Associate Deans and Chairs be reduced to approximately three to four hundred dollars to assist with the financial viability of the college finances.

Section 4: The appointment of chairs of departments should be done through a process that involves credential vetting, and election by the departments’ faculty members so as to facilitate motivation, inclusion, and efficiency and not by the existing status quo.

Section 6: That a Strategic Plan be developed to chart the way forward for the College.

Section 7: That there be an Evaluation of the Pension/Retirement Plan where the following question should be answered:

(a) Is there an established policy document for the pension plan?

(b) How much funds are in the pension plan?

(c) How much persons are in the plan?

(d) Is the pension plan sustainable if all eligible staff were to sign on to the plan?

(e) Is it morally and financially correct, especially for the protagonist of the plan, to withdraw their contribution of 5% plus TAMCC 5% contributions?

Section 8: That the job description of the staff development officer be reviewed and revised to ensure that the job’s responsibility of identifying staff training and development needs, and for planning, organising and overseeing appropriate training are met.

Section 9: That all employees adhere to the tenets outline in the Employment Policy Handbook to bolster increase efficiency and productivity.

IN WITNESS WHEREOF the parties or their duly authorized agents have hereunto set their respective signatures on the day and year first hereinabove written.

SIGNED FOR AND ON BEHALF OF THE T. A. MARRYSHOW COMMUNITY COLLEGE (TAMCC)

SIGNED FOR AND ON BEHALF OF THE UNIONS