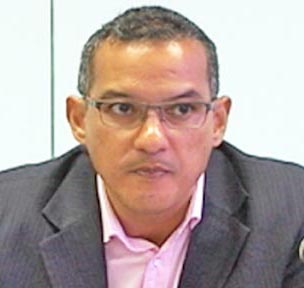 Minister Nickolas Steele – denied any involvement in the Skygate scandal

Grenada has denied that it was involved with a fugitive from justice in Germany, Jan Marsalek, Chief Operating Officer of Wirecard in order to secure spying software for use in the country.

Speaking to THE NEW TODAY on Monday, Health Minister Nickolas Steele said that he did not make any such request to the Austrian-born Marsalek who is wanted by police in Germany as part of a billion dollar investigation after Wirecard was allegedly discovered in wrongdoing.

The fugitive executive of the embattled payment startup company was mentioned in the German weekly magazine, Der Spiegel, as trying to source the spying equipment for Grenada shortly after the 2013 general election in which current Prime Minister Dr. Keith Mitchell returned to power.

The magazine reported over the weekend that Marsalek, who is on the run, had a meeting with the Italian surveillance technology provider, Hacking Team in 2013 as an official representative of the government of Grenada to try and secure the spying technology.

Der Spiegel included in the article the printed letter with the controversial letterhead of the Grenada government which was purported to be signed by Steele who was then the Minister of Foreign Affairs.

The senior government minister categorically denied any involvement or knowledge of the Marsalek dealings with Hacking Team on the software issue.

“For sure, for sure, definitely, definitely,” the senior government minister told THE NEW TODAY in his strong denial after he was presented with the contents of the article in both German and English from the magazine with the allegation about him.

According to Minister Steele, this was impossible since the Mitchell-led ruling New National Party (NNP) government had just won the elections and was itself passing legislation in Parliament to outlaw the practice.

He said he suspected that the Austrian fraudster might have gotten a Grenada government letterhead through “some other correspondence or so” at an earlier stage and was now trying to use it in an illegal manner.

According to Minister Steele, the letterhead used by the Austrian fugitive has “left out certain things that are part of our regular correspondence” and is definitely not an authentic document.

The Grenada Minister had engaged the reporter who wrote the spying software article for the German magazine in a telephone conversation on Sunday.

Steele told this newspaper that the reporter informed him in their engagement that they are continuing to follow on Marsalek’s trail and from the research done so far he is linked to several fraudulent documents.

“I told them “no” – we most definitely did not correspond with him on that (spy software). He did come to Grenada and he was trying to sell his Wirecard technology,” he said.

An extract from the tech magazine known as VICE, said that it is turning out that Marsalek was never a Grenada government representative as both Der Spiegel and Motherboard have found out.

The report said: “In a phone call, Steele, who is now the Minister (of) Health in Grenada said the document leaked in the Hacking Team emails is fraudulent.

“I can categorically state that the letter in your attachment bearing a resemblance to my signature and office at that time is a fraudulent document,” Steele said in the phone call, referring to the apparent business deal between Grenada and Hacking Team. “I certainly did not make that request or any such request.”

“Steele confirmed to Spiegel and Motherboard that he had met Marsalek and another person whose name is mentioned in the document in the summer of 2013. “He was a very charismatic young man and a smooth talker,” Steele remembers. The meetings were about a business proposal from Marsalek involving Wirecard technology. In the end, however, no deal was made, Steele said.

“The head of Encryptech, a Mexican company that is mentioned in the letter, and which worked as an intermediary between Hacking Team and some government customers, called the letter “fake.”

“They used the name of my company without authorization,” Alfonso Ayensa said in an online chat”.

Minister Steele told THE NEW TODAY that Marsalek was interested in a project that involved the Ministry of Finance on Wirecard business but nothing actually happened with his proposal.

“That is what I know of him from checking around,” he remarked.

Minister Steele said he assured the German magazine that he would make himself available for any questions or clarification that they might need on the issue of the alleged software matter in light of the fact that the Austrian fugitive is now being investigated in the 1.9 billion fraud in Germany.

He said: “They (magazine) have reached out to me for clarity and I have been co-operating with them. I told him that we understand what he’s doing in terms of trying to track down a criminal in Germany so we remain available.

“In terms of taking legal action against the gentleman, if Germany can’t find him, we can’t find him but we can lodge on record that he has fraudulently misrepresented the government of Grenada or tried to … and if and when he ever shows up we can follow suit but I wouldn’t use public funds on that right now,” he added.

The Mitchell-led NNP regime has been dogged by controversies over the years especially with foreign investors who have duped the island of millions of dollars.

The latest was the Shrimp Farm project in Victoria, St. Mark in which approximately EC$52.2 million collected by the non-national investors from the sale of Grenadian passports have disappeared without a trace.

The Marsalek documents including the Grenada letterhead were included in a cache published after Hacking Team was hacked in 2015.

Marsalek has been described as the ‘world’s most wanted man’ and reportedly fled Germany to Belarus, and is now thought to be hiding out in Russia under the protection of the Russian Intelligence Services.

His Wirecard company suddenly collapsed in June after German regulators raided its headquarters as part of an investigation into fraudulent stock price manipulation and 1.9 billion euro that are missing from the company’s books.