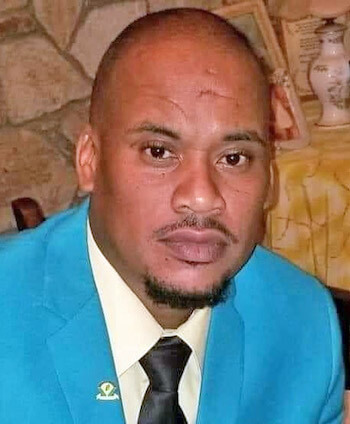 GPWU President Brian Grimes – voiced his opinion on the issue

Those were the words of Prime Minister Dickon Mitchell, who acknowledged the rights of both employers and employees as he responded to a question posed by THE NEW TODAY on his government’s decision to repay the salaries that were docked from the November 2018 pay of teachers and other public servants by the Keith Mitchell administration, during this week’s post-Cabinet briefing in St. George’s on Wednesday.

Although his government took the decision to repay the monies last month, Prime Minister Mitchell confirmed that the plan is not to introduce legislation that will require employers to pay workers when they take strike action.

The Grenadian leader advanced the argument that “at first blush, I am sure employers would find that a difficult concept to grapple with (because) if you could not work and be paid then, it basically puts an employer in a situation where an employee can essentially not do anything, and be paid, and I can’t sit here and say that’s fair.”

“…One (1) hand can’t clap, your right to industrial action is protected already in law, and I mean obviously, if there is a dispute (or) a grievance, you certainly have the right to, in a sense, to flex your muscle to try to get the employer to agree to the terms and conditions that you want, but at the same time, you can’t flex your muscle and then still be paid,” he said.

“… Basically, it would mean that you could just not show up to work and be paid, and I think the fundamental relationship between pay and work is that you have to work to be paid. So, I certainly have to say I think that would be a difficult concept to push, and perhaps would even be unfair,” he added.

The Prime Minister also used the opportunity to explain his ruling National Democratic Congress (NDC) administration’s decision to pay the docked salaries, by taking into consideration the circumstances surrounding teachers and other public servants and their 10-day strike for pension and gratuity.

“…We were satisfied that it was not a question of (the former government’s) inability to pay but it was a question of frankly a power play…and in those circumstances we do not think any employer, including the government is justified in acting in that manner,” he said.

According to PM Dickon Mitchell, the move by his administration was intended “to send the message to our unions and employees, particularly the government employees that we are prepared to be reasonable, to extend the olive branch, and so, in return we expect also that they would be reasonable, and productive, and when it comes to settling differences between us that we will take a reasonable and constructive approach, and methodology to do so.”

President of the Public Workers Union (PWU) Brian Grimes commended the approach of the newly formed government to the controversial issue, describing it as “a stroke of genius, in that they have eliminated the legal wrangling, and interpretations, and have gone on a mission to try and improve the industrial relations climate in this country, between the public sector workers in particular, and the sitting government.”

Grimes said the PWU, which is largely a representative body for workers in the public service, and has a major role to play in terms of national development, said he believes that the move by the Prime Minister and his Congress administration “sets the table for better industrial relations going forward.”

In an exclusive interview with THE NEW TODAY on Wednesday, Grimes charged that the former administration had acted “hurriedly, and without due process” and “in anger (and) bitterness” to dock the workers’ pay.

He also revealed that “many people who didn’t even participate in the strike (that their) salaries were docked innocently” including those who were on “maternity and holiday leave” at the time, pointing to there being a “huge question mark as to the procedural approach in terms of docking of salaries.”

“I thought it was an illegal gesture on the part of the former administration,” Grimes quipped.

However, former trade unionist and outgoing President of the Senate, Chester Humphrey is among associates of the main opposition New National Party (NNP) government of former Prime Minister Keith Mitchell, who continue to maintain that the workers’ November 2018 pay was not docked but rightfully withheld.

According to Humphrey, former President-General of the Technical & Allied Workers Union (TAWU), there is no legal obligation for an employer to pay workers who go on strike.

In an appearance on the Narrative programme with host Calistra Farrier, Humphrey contended that strike pay is essentially the obligation of the trade union which has called the strike, through what he referred to as a ‘strike fund.’

Grimes, who alluded to the apparatus of a strike fund being well endowed in most trade unions across the region and the world, said he was not in a position to publicly disclose the details regarding the status of the GPWU strike fund, without permission from his executive.

“…It is a sensitive matter,” he remarked.

However, the PWU boss re-emphasised his longstanding contention that the past NNP administration was “trying to cripple our union” through the illegal use of contract work, which did not allow for affected workers to pay membership subscriptions as required by law in order to preserve the long-term sustainability of the trade union.

Grimes also pointed to Section 43(3) of the Labour Relations Act which states that “where a trade union has been certified as the exclusive bargaining agent for a bargaining unit, all the employees employed in that unit who have not authorised the employer to make periodic deductions as required in sub-section (1), shall pay a service contribution to that trade union equal to its regular membership subscription.”

The PWU President said “the NNP administration of old, ignored this article, and they were, as is commonly known throughout this nation, using all different sorts of contracts, and those contract workers do not pay union dues, even though they were viewed as public officers.

“So, they were in the process of flouting the law, cutting out the financial legs of our trade union,” he quipped.

However, Grimes expressed the hope “that this new administration would take the opportunity to start to follow the law, and ensure that our dues are collected.”

The payment of dues, he added, “will also allow us to service our membership better, and improve on their conditions socially and otherwise, have more workshops et cetera.”

“We will have a properly functioning strike fund if necessary, and we will also be able to increase our scholarship awards that we give to our members on a yearly basis,” he said.

According to Prime Minister Mitchell, his government is “committed to educating ourselves, members of the public, (and) our employees about our rights, responsibilities, and our collective responsibilities to build Grenada.”

In his bid to enhance the industrial relations climate in the country, and in keeping with promises made on the election campaign trail as part of the NDC’s transformational agenda, Prime Minister Mitchell has also promised to implement a bi-weekly salary structure for government workers, and to make all contract workers permanent and to begin paying the retroactive aspect of the pensions in November, in keeping with the recent court order.