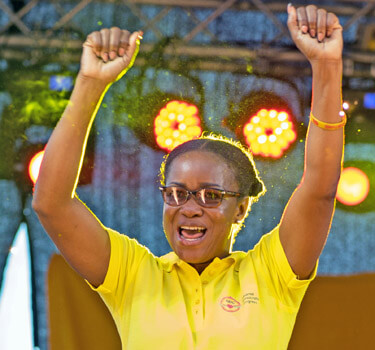 I have stepped forward to take care of North-east.

The words bellowed out from Opposition Senator in the Upper House of Parliament, Dr. Tessa St Cyr on Sunday night as she was officially introduced as the candidate for the main opposition National Democratic Congress to contest one of the four seats in Grenada’s largest parish of St. Andrew.

In addressing a large public gathering of Congress at Carlton Junction in Grenville, the female Parliamentarian gave an undertaking to transform the St Andrew North-east constituency which she is trying to take away from Kate Lewis, Minister for Youth in the Office of the Prime Minister.

Sen. St Cyr who works at St George’s University (SGU) said the time has come to serve at a higher level in Grenada since she has made her contributions in several areas to the people of St. Andrew as an organiser for the hosting of the National Youth Parliament, as well as a community organiser.

“I have served my people and served them well,” she said.

The Opposition Senator was given the nod at the last minute to contest the seat for Congress over the early front-runner, Leo Cato, the Chairman of the Grenada Co-operative Nutmeg Association (GCNA).

NDC sources told THE NEW TODAY that Cato who was doing intense political work on the ground had topped the poll that was conducted by the party.

One insider said that on the night to select the candidate party leader Dickon Mitchell announced that Cato had won the poll and will go forward but he had to pull back as the delegates on the floor disagreed and called for Dr. St Cyr.

The issue was put to the vote and Sen. St Cyr received about two-thirds of the votes, resulting in party officials engaging Cato who agreed not to go forward and to back down for the female Parliamentarian.

In her maiden address on the NDC platform, Sen. St Cyr described her transition into the political arena as just another opportunity “to show up when my country needs me, to show up to make a difference, to show up because we have to prepare a better future for our children and our children’s children.”

In a direct attack on her opponent, she charged that for too long the constituency of St Andrew North-east has suffered from neglect under the ruling New National Party (NNP) which has never lost the seat since 1995.

She labelled the period as nothing but 27 years of “unbroken promises” to constituents under the leadership of Prime Minister Dr. Keith Mitchell.

According to Sen. St Cyr the constituency has been “under-served and under-represented” by those Members of Parliament on the NNP side for years.

On plans for the constituency, she said the much-talked about Seamoon Industrial Park, once rebuilt, will be used as a manufacturing hub in the north of the island.

This project, she said, will seek to create jobs for persons in the area, as well as help to lessen the wastage of fruits from the farming community.

‘We have a lot of fruits and vegetables going to waste – we have a solution for that,” she told the crowd.

Sen. St Cyr told the gathering that under a Congress government, the Seamoon Cultural Centre will become a reality unlike the present administration which keeps making promises and not fulfilling them.

She also promised to bring about the upgrade of the sporting facilities in the constituency and singled out the playing field at La Potrie which has no night lighting facilities, as well as improvements to the pre-school in the village, and the rebuilding of the Tivoli medical centre.

The two major political parties in Grenada – NNP and NDC – have been launching candidates for the upcoming general election which Prime Minister Mitchell has said could be called anytime soon.