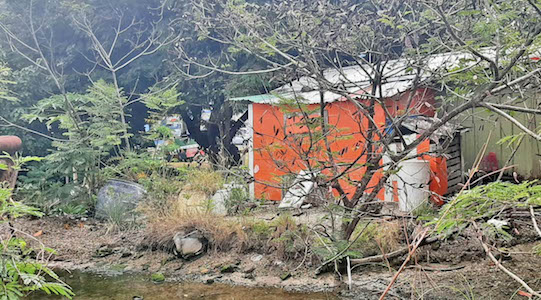 With elections now over, the beautification of the Lagoon Road is back on the agenda of several locals who are planning to develop a section of it around Bryden & Minors and turn it into a Green space.

A spokesperson for the group told THE NEW TODAY that a key business in the area, Camper and Nicholson is on board to help in the clean-up of the space that is currently occupied by some squatters.

She said that two of the island’s leading cultural artistes are interested in getting involved in the project and helping to turn a section into a Cultural space so that on a moonlight night, persons “can bring your chairs and get some story-telling.”

She also said that during the annual Carnival in August some bleachers can be erected for people to sit down there and watch mas.

According to the spokesperson, the organisers plan to decorate the trees around Christmas so that “you make there a nice little Christmas space.”

In addition, locals will be allowed to use the area on some nights to sell hot dogs and the like.

“So what we’re trying to create is a nice green space in Lagoon Road for families and people – you can bring your mother, grandmother because it ain’t hard for them to walk and it is relaxing –  so that is what we want to do in Lagoon Road,” she said.

The spokesperson told THE NEW TODAY that not only is Camper & Nicholson on board with the persons behind the initiative but the company has agreed to contribute to some of the funding to develop it properly.

“I went straight to the Chairman of the Board – Camper is fully on board with me,” she said, adding that they plan to erect a sign there to indicate that the area is going to be developed into a Green Space.

She also made mention of a specific area that Camper had developed in the Lagoon to put their construction material when they were developing the Yachting area and after the work was completed allowed a local businessman engaged in the trawler and container business to utilize it in order to keep away squatters.

According to the spokesman, that particular area is under licence from the Grenada Ports Authority and that Camper pays them an annual fee to keep the space since it was supposed to be removed once the construction was completed.

“I am saying to them (Camper) if they are paying to maintain it then there is no need to break it down and bring it back into sea water as is the agreement,” she said.

The Group member has put forward a suggestion for the Ports Authority to lease it to Camper for 5 years to be added to the proposed Green Space.

“Let’s put some benches on it because it is very well compacted so it’s kind of looking to see what we can do with it. We are trying to pull heads together to make it a positive space. We will get the money – I ain’t worry about that,” she said.