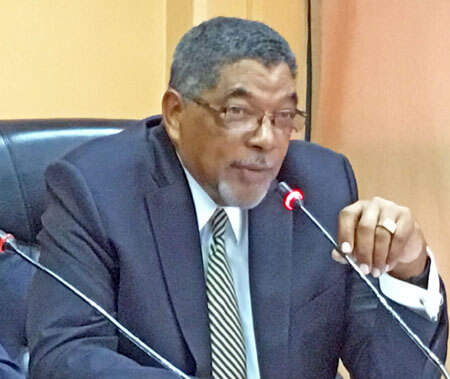 Percival Clouden – has suddenly resigned from the CBI programme

A key player in Grenada’s passport-selling scheme known as Citizenship By Investment (CBI), Percival Clouden has quit the job amidst reports of a growing rift between himself and Prime Minister Dr. Keith Mitchell.

Well-placed sources told THE NEW TODAY that Clouden, the brother of prominent attorney-at-law, Anselm Clouden, has sent in a letter of resignation as Chief Executive Officer (CEO) of the Citizenship programme to take effect today (Friday).

A source who spoke on condition that he was not identified said that the Grenada Passport czar was experiencing strained relations with Prime Minister Mitchell in recent months over a number of issues pertaining to the selling of passports which took a nosedive in sales following the Coronavirus pandemic in March 2020.

It is alleged that PM Mitchell wanted Clouden to process a number of applications for passports outside of the usual system put in place including assistance from the major Western security bodies like the Federal Bureau of Investigations (FBI) of the United States and Britain’s MI-5.

According to the source, an approach was made to the CBI boss “to process these things, just get things going without getting the proper authorisation” from those overseas bodies that help conduct the due diligence of applicants for passports.

He said the issue that really broke the Camel’s back in the Clouden/Mitchell relationship came at a time when the Prime Minister apparently out of frustration used the words to him, “I will throw you under the bus” at a meeting.

The Grenadian leader has built up a reputation over the years for using people and then discarding them when they are no longer considered as useful to him.

The source said that after those words were thrown at him by the Prime Minister, the CBI Chief decided it was about time for him to make his departure from the job.

He told THE NEW TODAY that the first showdown between PM Mitchell and Clouden came one day when the CEO dismissed a key female supporter of the ruling New National Party (NNP) for alleged non-performance on the job.

He said that Clouden took the decision to fire the individual as part of a plan to restructure the organisation and to weed out a number of persons who were “wasting time” on the job.

“The big man (PM Mitchell) tell him (Clouden), you can’t move so, that has to go through the Public Service and they had to take back the lady”.

The source said that in recent times, Clouden had increasingly become totally “dissatisfied with the way things going” at CBI with sales dropping and the pressure coming from the government quarters in the Ministerial Complex at the Botanical Gardens.

Another source told THE NEW TODAY that he had a private conversation with Clouden on his association with Prime Minister Mitchell and his ruling New National Party in the running of the CBI programme.

He said that on one occasion, Clouden told him, “I don’t want to get myself involved in anything (wrong).”

“He (Clouden) was very upset with himself,” the source said but quickly added that the CBI Chief did not elaborate on his concerns in the conversation.

According to the source within the past three months, he formed the impression that Clouden got “dissatisfied with that (pressure) and the man (Keith Mitchell) get dissatisfied with him – he ain’t doing what somebody wanted him to do”.

In addition, Clouden is said to have angered the powers-that-be in the manner in which he held up a hotel project in the south of the island as the investor was not allegedly properly cleared in terms of the necessary due diligence.

“He (Clouden) get fed up of the man (Mitchell) too,” the source told THE NEW TODAY.

Clouden is a retired banker with over 25 years of experience in the U.S Virgin Islands and on his return home to live permanently a few years ago was reportedly approached by Prime Minister Mitchell to help him streamline the problematic CBI programme which was dogged by a number of controversies since its inception.

The Carriacou-born native was initially appointed as Chairman of the Board of Directors of CBI and then to the CEO position at the passport scheme.

When contacted via cellphone at 12.40 p.m. Thursday for comment on his resignation, Clouden said that he was having lunch and promised to call back but never did.

When he did not call after a few hours, THE NEW TODAY called again and he denied any rift between himself and Prime Minister Mitchell, saying that his resignation was due to health reasons and that he was due to leave the island soon for an extended period to take care of himself.

The former CBI CEO described the relationship with the Prime Minister as “very cordial” among them for over 50 years and reflected on the days when he served under Dr. Mitchell’s captaincy as the fast bowler for PBC.

This newspaper will carry an extensive article in the next issue about Clouden’s response to allegations of a rift between himself and Prime Minister Mitchell.

The following message was sent Thursday by THE NEW TODAY to Philomena Robertson, Press Secretary in the Office of the Prime Minister:

“Good day Madam Press Secretary… we are doing this story about the resignation of the CBI CEO in which reference is made about certain pressures coming from the Prime Minister to him and we are sending the article to solicit a response from the Grenadian leader. Much obliged.

Press Secretary: Good afternoon. I note the request. Had to decline the call because I’m in a meeting.

THE NEW TODAY: I am looking forward to a response as we do have our publication deadline.

The Mitchell/Clouden relationship started off during their school boy days at Presentation Brother’s College (PBC) with the two of them representing the school on the field of cricket.

Clouden is believed to have made a number of contributions over the years to the NNP cause in general election.