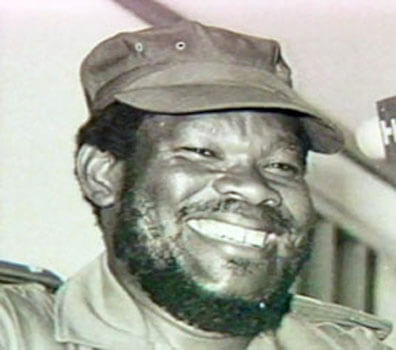 General Hudson Austin – has broken his silence after 38 years

For the first time in 38 years, Grenada’s former army strongman General Hudson Austin has given details about his capture by U.S troops who stormed the island six days after the October 19, 1983 bloody massacre at Fort Rupert in which Marxist Prime Minister Maurice Bishop and three Cabinet colleagues were executed in a palace coup within the then ruling New Jewel Movement (NJM).

In a 3-hour interview with THE NEW TODAY, the 83-year old top army officer said that he was taken into custody at a secret hideout in the Westerhall Point area in the home of a German national named “Jonah along with two other top army officers – Lieutenant-Colonel Ewart Layne and Major Leon “Bogo” Cornwall.

The General pointed a finger at the late Mechanical Engineer, Cleveland Donald of St. Paul’s in St. George for providing the US troops with the vital piece of information on his location.

“Cleveland Donald did it. Donald that tell them,” he said.

According to Austin, the Americans had set up a camp near to Donald’s home and that one of his confidantes, the late Precious Telesford of Westerhall visited him and made the mistake of briefing him on their exact location.

“Precious went by him (Donald) to get some gas because Precious was the one who was in contact with us because we were by Precious for a while, and he Precious made the mistake and tell Donald where we were and then I hear helicopters circulating in the air.

Austin said at this stage he knew that it was over for them as the U.S soldiers then entered into the hideout base.

Well-placed sources told THE NEW TODAY it is possible that Donald did co-operate with the Americans in helping them to lay their hands on the top Grenada military commander.

Donald was a known supporter of the executed Bishop and is said to have been upset with General Austin for giving support to a rival faction with the NJM that had placed the Prime Minister under house arrest and then liquidated him after a large crowd of supporters had stormed his home at Mt Wheldale and freed him.

General Austin was also asked to comment on reports that the top brass of the People’s Revolutionary Army (PRA) including himself did not engage in any active combat with the U.S troops that landed on the island.

He retorted: “You expect the Commander of the army to engage in combat? Who go give command?

Austin said he never led any of the PRA troops into fighting the US soldiers because “I had too much things to do”.

According to General Austin as part of the training the soldiers under his command in the PRA knew everything in advance about the set up that will take place in defending the homeland.

“The troops did well – they did dam well. Even them the Americans had to admit that. One of the Americans – from the documents they get from my office – they say that although I didn’t have high quality military training I knew what I was about.

General Austin also denied reports circulating back in 1983 that he used to dress in female clothing as a form of disguise to move around in order to evade U.S troops who were looking for him.

“That is bullshit. When the Americans captured me I was in my military uniform”.

Asked to comment on reports that he was trying to leave the island for Guyana to seek a safe haven, Austin said: “That is nonsense. What you going to Guyana with? How you will go to Guyana from Westerhall Point?

The General also cleared up reports that he was tortured by U.S soldiers after he was taken into custody.

The ex-army chief said he believes that this kick helped to damage his kidneys which over the years has created a serious medical condition for him.

“I have a big tube inside of me here,” said The General as he pointed to the left side of his waist.

Austin refuted claims made by pro-Coard elements on the NJM Central Committee that what also contributed to the bitter split within the Revolution was the Cubans who were meddling too much in the internal affairs of the revolutionary process.

Convicted ex-army Major John “Chaulkie” Ventour claimed that the Cubans will often go to Prime Minister Bishop to overturn some of the decisions made by the top army brass within the PRA on internal security matters.

According to General Austin, this allegation against the Cubans is untrue.

“That is a Bernard Coard statement – that is a lie,” he said.

General Austin regarded the Cubans as very “meticolous and principled people” but it was Coard who always wanted to ride rough shot over them.

“…Bernard Coard is an unprincipled man. I remember every time Maurice leave the country, Bernard Coard will summon the Cubans to meetings. No agenda – just bringing them in a meeting and when you come in the meeting you don’t know what he wants to discuss and that used to piss them off – to show them that he has power.

The army boss recalled one such meeting in which Coard wanted to hear first-hand from the Cubans the latest development taking place on the construction of the international airport at Point Salines.

“He (Bernard) had no agenda so them Cubans say we didn’t know what you want to discuss so we didn’t walk with any documents to give you any explanation”.

According to Austin, nothing much was achieved in the meeting with the Cubans who were providing most of the technical support and manpower force for the airport project.

“Bernard has that nasty habit. He tried that with me twice too – just call for a meeting without agenda to discuss the Eastern main road.

Austin said that on one occasion, Coard, who held the post of Deputy Prime Minister and Minister of Finance, went behind his back and fired one of the Engineers who was from St. David and was working on the project without discussing it with him.

“I tell Maurice I’m not putting up with that shit and I bringing back the man to work”.

Austin said the engineer knew what he was about and was considered as competent but “Bernard find that he can’t use him and just want to fire him.”

The ex-army general identified Coard as the one responsible for the destruction of the Grenada Revolution because of his greed for power and his ambition to take over from bishop as Prime Minister of the country.

General Austin along with Coard and fifteen other top army and government officials are now free after spending over 25 years at the Richmond Hill prison on conviction for the executions of Bishop and three other Cabinet Ministers of the ill-fated People’s Revolutionary Government (PRG).