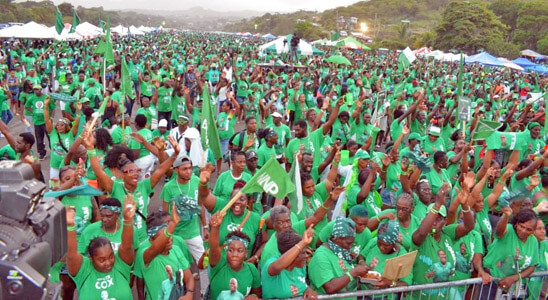 Everything is cash – untraceable.

That’s how one Service Provider described the manner in which he gets paid by the New National Party (NNP) whenever he is contracted to do anything for them.

The individual was speaking against the backdrop of reports in the international media that three former government ministers in the NNP administration benefitted from an alleged payment of US$140, 000.00 from a Polish national for a Grenada diplomatic passport.

Prime Minister Dickon Mitchell addressed the issue Monday night at a Town Hall meeting when he disclosed that the individual from Poland was required to pay US$290, 000.00 on the face of a Cabinet Conclusion but a portion was diverted to the NNP Constitution branch in South St George.

According to the Service Provider, the NNP operates as a money laundering outfit and prefer to give payment in cash as “it is untraceable.”

“There is always a trail when you write a cheque or you make a money transfer but when you’re dealing with cash there is no trail,” he said.

He stated that the revelations made by PM Dickon Mitchell on Monday night about the diversion of State funds for the sale of a diplomatic passport to a native from Poland can prove to be problematic to the NNP.

He said it is clear from the pronouncement from the Grenadian leader that the deal with the Polish national had a paper trail and the NNP of former Prime Minister Dr. Keith Mitchell will be hard pressed “to get away from this one.”

He charged that the main opposition party on the island has been left “mortally wounded” by the disclosure.

A former senior government minister whose name has been linked to the sale of the diplomatic passport to the Polish individual declined to take calls from THE NEW TODAY.

However, former Infrastructure Development Minister Norland Cox who was in charge of the NNP Constituency office during the election as its candidate denied any knowledge of the issue.