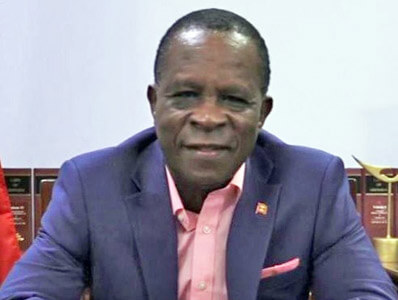 Dr. Keith Mitchell – signals again his intention to bow out

Former General Secretary with the National Democratic Congress (NDC), Peter David who served as Agriculture Minister in the defeated New National Party (NNP) government has decided to contest for the post of Political Leader of the party to replace the aging 76-year old, Dr. Keith Mitchell.

A source close to David quotes him as saying that he has already consulted with family members on his decision to challenge for the position of leader of NNP at the next Convention of the party.

He said that the ex-government minister who will be approaching 70 at the time of the next election, constitutionally due in 2027 is also weighing his political options if he does not land the job of NNP Political Leader.

David is known to have expressed an interest in setting up a law practice in Dominica in which the island’s Prime Minister Roosevelt Skerrit is known to be a close friend.

The NNP held a retreat last Saturday in St David to look at the reasons for the party’s defeat in the June 23 poll to new Prime Minister Dickon Mitchell and Congress.

Dr. Mitchell is said to have reiterated at the retreat that he does not intend to hold onto the leadership of the party.

A party insider warned that the NNP has to be careful to avoid infighting over the selection of a possible successor to Dr. Mitchell, who has announced that he would not be seeking re-election to Parliament for his St George North-west constituency.

There are reports that agreement was reached at the meeting for the transition process to continue to find a successor to Dr. Mitchell who has been involved in local politics for the past 50 years.

Dr. Mitchell has already indicated that the new NNP leader could even come from someone who is outside of the country.

Former diplomat Akima Paul-Lambert who is an attorney-at-law living in England has often been mentioned as a possible successor to Dr. Mitchell.

The party insider told THE NEW TODAY that David, an attorney-at-law by profession, is considered as the main front-runner at the moment over former Education Minister Emmalin Pierre whose name has been called as a contender for the post of NNP boss.

He spoke of the need for the party to avoid a contentious fight for leadership as pro-David supporters might be able to get the backing of several rural constituencies like St. Andrew North-east, St Andrew North-west, St. Patrick East and St Patrick West, as well as St John.

According to the insider, former Prime Minister Mitchell is still a powerful force to be reckoned with but he is no longer a commanding figure in the party as when he was in charge of the government.

He said that the ex-Grenadian leader no longer has control over some of the elected Members of Parliament like when he was in government and could have kept them in check over the threat of transfer and dismissal as a government minister.

In addition, he said that age has now become a factor as Dr. Mitchell is no longer able to engage in frequent visits around the island to meet with party supporters.

The relationship between Dr. Mitchell and David is said to be rather “cold” at the moment with little or no engagement between the two since the NNP defeat at the polls.

Another party source said that Dr. Mitchell is prepared to meet on a one-and-one with David who is reluctant to engage him in a closed door meeting involving just the two of them.

He said that a medical doctor with close ties to the party has been suggested as a person who should be approached to facilitate talks between the two on the future leadership of NNP.

David is still without a major position within the NNP and serves as the deputy to former Agriculture Minister Roland Bhola who holds the key position of General Secretary of the party.

Dr. Mitchell had used the post of NNP General Secretary to topple the aging and ailing Herbert Blaize as party leader in 1989.