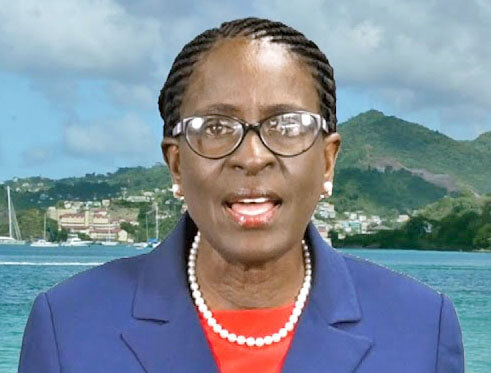 Dr. Modeste-Curwen – gave an update on the MBIA upgrade loan from China

The Chinese funded expansion of Grenada’s flagship international airport is moving ahead with an official project launch planned for later this month.

Civil Aviation Minister, Dr. Clarice Modeste-Curwen told reporters Tuesday that if Grenada is to attract more international flights, the Maurice Bishop International Airport (MBIA) has to be of a higher standard.

However the expansion is beginning at a time of great uncertainty in the world regarding air travel because of the prolonged COVID-19 pandemic.

If Grenada is unable to meet the repayment conditions, the country could face a problem with the airport falling into Chinese hands in foreclosure as has been the case for countries in Africa.

In late 2018, China moved to take over the Kenneth Kaunda International Airport in Zambia for non-payment of huge debts.

Grenada, with its struggling economy could find itself lacking the economic strength to repay its Chinese debts on time, placing national assets in jeopardy.

Last month, Prime Minister Dr. Keith Mitchell told Grenadians living in the Diaspora that the island’s government has not contracted any debt with the government of Mainland China.

He said that the Chinese have been providing mainly grant funding for projects on the island especially a number of low-cost homes.

Grenada is projected to experience severe negative growth this year as a result of the crash of the tourism industry and the economic impact of COVID-19 on the Grenada economy could continue for quite some time.

Even with future resurgence of the tourism, Grenada’s huge dependence on that sector could result in future shocks to the economy given the fragility of that industry.

Minister Curwen-Modeste said she is confident that Grenada will be able to repay the over $150-million borrowed at concessionary terms from Chinese lenders.

Responding to questions from a local reporter during the weekly post-Cabinet briefing Tuesday, the senior government minister said, “We are looking forward to doing the sod turning, the arrangements have been made, the scope of works have been settled and so on. The kinds of planes that come are determined, in part, by your airport, by your space, by your hangars, the facilities that you provide for other flights.

“We want to look at maybe the same airlines but different kinds of aircraft or a completely different airline. Prior to COVID our numbers were increasing, both in stay-over and cruise and this is what we would like to forge ahead with, bringing in more passengers. We need to have it expanded,” she added.

The Civil Aviation Minister noted that other islands, some smaller than Grenada like St Vincent and the Grenadines, have better facilities than Grenada and have been able to attract flights that the Spice Isle has been unable to.

Grenada has struggled to attract international flights as Carriers are reluctant to fly at low seat capacity and in some instances the government has been forced to subsidise airlines in the millions, to cover the costs of empty seats.

The MBIA expansion project will include a parallel taxiway, loading bridges, a bypass road, passenger terminals, a second apron for cargo and an emergency center.

When the project was announced two years ago, General Manager at the airport, Trinidadian Wendy Williams, said it would be “carefully planned to ensure (our) ability to adequately manage debt servicing.”