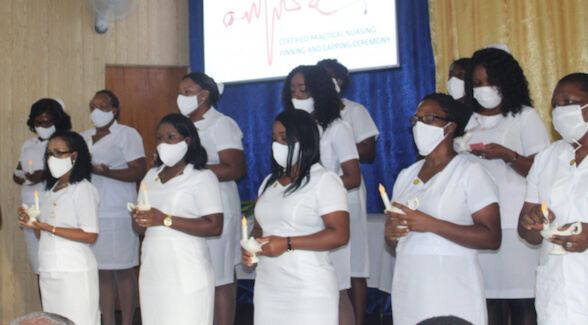 Grenada and other Caribbean islands can take action on their own to stop the brain drain especially among qualified nurses from their homelands to the more lucrative markets in North America and Europe.

This is the findings of a study conducted by the Pan-American Health Organisation (PAHO) in 2019 into some of the factors responsible for the mass exodus of nurses from the English-speaking Caribbean especially to the United States, United Kingdom and Canada.

According to the report, some of the nurses did express an interest in returning to the region if opportunities are presented to them from their governments.

It said that about 74% of the Caribbean health professionals residing in North America and Europe would seriously consider returning home if salaries, working conditions, and employment opportunities improved significantly.

It also provided statistics to show that about 92% of health professionals surveyed, who are currently residing in the Caribbean, stated that they would migrate less if promotional opportunities and career advancements would be available to them.

The report said: “These responses show that individuals from the Caribbean seem to have a strong bond with their countries, society, and families.

“Encouraging the return of these professionals to the region and retaining those already there looks to be a promising and worthwhile effort, but one that will require strengthening of their health systems and public institutions as well as human resources policies that are fair and transparent.

The Caribbean is feeling the loss of these healthcare workers as the coronavirus pandemic is affecting most of the islands and forcing some of them to look especially to Cuba to help fill the void.

As a public service, THE NEW TODAY has decided to carry some of the findings of the PAHO-commissioned report.

The findings of this study suggest that the opinion of the general population is very similar to the views of health workers regarding the reasons why people from the Caribbean migrate to more developed countries.

The results from the health workers survey indicate that the top five reasons why these professionals migrate are better working/employment conditions (45%), better financial/economic opportunities (25%), education/training opportunities (15%), too much bureaucracy (8%), and others (7%).

Noteworthy is the fact that both groups surveyed indicated that the top reason for migration is better working/employment conditions, which was by far the reason reported most frequently by health workers (45%) and the general population (33%).

Another critical question asked to health workers who are still working in their home country is related to their desire to migrate if the opportunity arises in the future.

Their response to the question “would you migrate, if you had the means and opportunity to do so?” shows that, of the 573 health workers surveyed, 341 or 59.5% indicated that they would migrate if given the opportunity, while 232 or 40.5% stated they would not.

These results suggest that more than half of the current health workforce available in the Caribbean countries surveyed that are already dealing with a severe shortage of personnel may leave in the future.

To investigate the health worker perception of the health system at home as it compares to other health systems abroad, without mentioning any specific country, the survey asked if they agree to the statement “if I had a serious medical condition that needed urgent attention and I had the means to travel abroad or to stay in my country, I would prefer to stay at home to have it addressed.” Only 22.2% of respondents said they would stay at home to resolve the health issue.

Regarding health workers’ perception of public and the private healthcare services in their home country, the survey asked if they agreed to the statement “If I had a serious medical condition which had to be addressed only in my country, I would prefer to have it done at a private institution rather than in the public hospitals.”

About 91.4% of respondents stated they would prefer to use private institutions for their healthcare needs instead of public hospitals, suggesting a significant differential in the perceived quality of care of private versus public institutions.

Regarding the statement “salaries and working benefits for nurses and other health workers are comparative to the rest of the population”, only 25.6% agreed with this statement. Lastly, they were asked “If promotional opportunities and career advancement for health care professionals were more available and timely, they would choose to migrate less”.

An overwhelming majority (91.7%) agreed to that statement, suggesting that promotional opportunities and career investment would potentially reduce migration.

It also indicates that other factors such as the country’s social, political, economic, and security issues are not the major driving force for the emigration from the Caribbean to more developed countries.

To investigate the possible divergence of opinions among the different categories of health workers surveyed, we further analyzed some of the questions by the professional category of those responding.

These results indicate that the majority of those in leadership and management positions have a very different opinion than that of other health workers.

For our analysis, we included Belize, Dominica, Guyana, Jamaica, Montserrat, St. Kitts and Nevis, St. Lucia, St. Vincent and the Grenadines, Suriname, and Trinidad and Tobago as source countries. Receiving countries were Antigua and Barbuda, Barbados, and Turks and Caicos.

These results show an interesting pattern where the opinion of health workers in source countries are very different from their counterparts in receiving countries for some of the questions but similar to others.

A curious response pattern observed is that, even though health workers in receiving countries considered the quality of healthcare in their country adequate or high standard, the majority would still prefer to seek medical care for a serious medical condition overseas (85%), similar to the pattern of respondents from source countries (76.8%).

These response patterns suggest that the health systems in Caribbean countries may not have the resources or capacity to treat serious medical conditions. There is also agreement between health workers in receiving and source countries when asked: “If I had a serious medical condition which had to be addressed only in my country, I would prefer to have it done at a private institution.”

When asked if working conditions and the environment in which health workers work are of high standard, the majority of those from receiving countries agreed (66%), while those in source countries overwhelmingly disagreed (88.3%).

Regarding salaries and work benefits for nurses and other health workers, again we find disagreement between respondents from receiving and source countries, where the overwhelming majority from source countries disagreed (82.4%), while the clear majority from receiving countries agreed (83.3%) that health workers wages and benefits are comparable to the rest of the population.

These results suggest that health workers in receiving countries are better compensated for the work and/or are more satisfied with their work benefits than those in source countries.

In addition to the opinion surveys administered to health workers in the countries and territories of the Caribbean, we also sought the opinion of health workers that have emigrated to the United States, Canada, the United Kingdom, and the Netherlands to investigate any similarities or divergence from the viewpoint of their counterparts who we did not migrate.

There were 88 health workers of the diaspora from the English Caribbean participating in this survey. This specific survey investigates possible push factors that contributed to the decision of these health workers to migrate.

An overwhelming 89% of health workers indicated that the economic situation and the poor working conditions in their home countries influenced their decision to migrate. Poor treatment and lack of respect for their occupation/profession were cited by about 74% of respondents as a contributing factor.

Approximately 70% stated that inadequate medical supplies, equipment, and facilities, as well as lack of job security, promotional opportunities and further educational training, contributed significantly to their decision to migrate. About 66% of the respondents acknowledged that the quality of healthcare in their country of origin was a factor in their decision to migrate.

While the Diaspora survey did not request individuals to specify the two most important reasons for their decision to migrate, like the open-question provided in the survey applied to the general population and health workers in participating Caribbean countries, their response is very similar to that of their counterparts who have not migrated.

We can safely assume that, according to those surveyed in the general population and healthcare workers in selected Caribbean countries as well as the diaspora in the United States, Canada, United Kingdom and the Netherlands, poor working conditions; inadequate medical supplies, equipment and facilities; poor treatment and lack of respect for or occupation; the quality of healthcare; and lack of job security, promotional opportunities, and further educational training were all significant contributors to the migration movement observed in the region.

Despite the possible bias introduced by the sample and study design, we believe that the opinions and perceptions of health workers of participating countries and diaspora are well represented here.

As for push factors, the overall motivation for health professionals to emigrate can be summarized as poor working conditions, low wages, poor treatment and lack of respect for health workers, and inadequate facilities, equipment, and medical supplies to perform their work.

Our findings are very similar to those of other reports that identified cause and effect of migration of health professions from the Caribbean region.

A report conducted by the World Bank, concluded that emigration of nurses from the English Caribbean to more developed countries were driven by wages, work dissatisfaction, and network effects.

The latter facilitates migration patterns, as globalisation allows for easy access to information regarding job opportunities, recruitment, better salary and benefits, and application processes, among others.

A report by the Economic Commission for Latin America and the Caribbean (ECLAC) suggests that nurses are leaving the Caribbean due to poor remuneration, lack of opportunities in education and training, violence and stressful working conditions.

The report further indicated that, in Jamaica, about 75% of nurses chose to migrate due to these conditions. Recruitment networks also enabled immigration of skilled professionals from the Caribbean to developed countries in North America and Europe.

A report from the International Organisation for Migration (IOM) indicates that economic stagnation, limited job opportunities, and the existence of established diaspora communities and networks contribute to the brain-drain of professionals from Caribbean countries.

Therefore, discontent with the working conditions and professional opportunities back home (push factors) and the open-door policies to skilled personnel and better wages offered by developed countries (pull factors) have contributed significantly to the brain-drain of Caribbean professionals.

The migration of health professionals from the English Caribbean seems to have no end in sight. Noteworthy is the fact that almost 60% of the health professionals who are still residing in their home countries and who participated in our survey stated that they would migrate if given the opportunity in the future.

These results are worrisome since the shortage of health professionals that are necessary for a health system to function correctly and provide needed healthcare to the population is already a pressing problem.

However, some of our results are encouraging and offer the opportunities for local governments to retain and attract some of their health professionals back to their health systems.

About 74% of the interviewed diaspora of Caribbean health professionals residing in North America and Europe would seriously consider returning home if salaries, working conditions, and employment opportunities improved significantly.

Likewise, about 92% of health professionals surveyed, who are currently residing in the Caribbean, stated that they would migrate less if promotional opportunities and career advancements would be available to them.

These responses show that individuals from the Caribbean seem to have a strong bond with their countries, society, and families.

Encouraging the return of these professionals to the region and retaining those already there looks to be a promising and worthwhile effort, but one that will require strengthening of their health systems and public institutions as well as human resources policies that are fair and transparent.