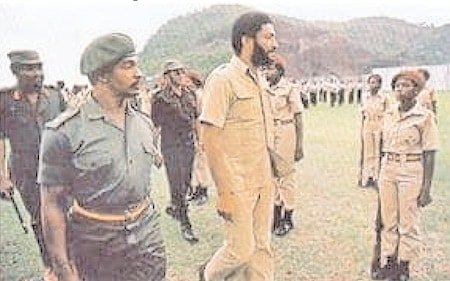 Maurice Bishop - inspecting some pioneers during the Grenada Revolution

The 40th anniversary of the ill-fated Grenada Revolution is still seeing the leftist forces on the island still divided and bitter.

The pro-supporters of executed Prime Minister Maurice Bishop are still pointing accusing fingers at those backers of the hardline Marxist-Leninist Bernard Coard, the ex-Deputy Prime Minister for the events of October 1983 which led to the demise of the revolutionary process.

Bishop was placed under house arrest by army officers loyal to Coard in the wake of allegations that the Prime Minister was responsible for spreading a rumour that his second in command along with his Jamaican-born wife, Phyllis were plotting to kill him.

The alleged rumour surfaced amidst reports that a pro-Coard faction in the Central Committee of the then ruling New Jewel Movement (NJM) had submitted a proposal for Joint Leadership of the party between the Prime Minister and his deputy.

Thousands of Grenadians took to the streets to press for Bishop’s release from house arrest and stormed the official residence of the Prime Minister at Mt. Wheldale on October 19, 1983 and freed him.

Less than two hours later, Bishop and three Cabinet colleagues were recaptured at Fort George and executed by a firing squad under the Command of Lieutenant Callistus “Iman Abdullah” Bernard who was brought back from the sister isle of Carriacou to head the group of soldiers who were guarding the Prime Minister while under house arrest.

In recent years, the March 13, 1979 and October 19, 1983 events were often commemorated by supporters of Bishop who had formed a party and a foundation in his name.

However, the supporters of Bernard Coard were the main organisers of last week’s event to mark the 40th anniversary of the Grenada Revolution.

Well-placed sources told THE NEW TODAY that the Coardites were snubbed by a number of pro-Bishop supporters who were approached to help plan the March 13 activities.

The Political Leader of the now defunct Maurice Bishop Patriotic Movement (MBPM), Dr. Terrence Marryshow issued the following statement to distance himself from those events:

The Maurice Bishop and October 19th, 1983 Martyrs Foundation wishes to clarify that we are not associated in any way, shape or form with the so-called March 13th celebration Committee.  Any reference of any association with the Committee is erroneous and misleading.

For the record and because there is some element of confusion about who are the ones organising several activities advertised on the radio and television around March 13th, we feel duty bound to make this distinction so that the public would not be misled.

That committee, as far as we are concerned, is nothing other than a front for the remnants of the Coard faction and those mainly responsible for many of the atrocities committed during the Revolution; and specifically the extremist actions that led to the untimely demise of the Revolution and the physical liquidation of Prime Minister Maurice Bishop and several of his Cabinet colleagues and ordinary Grenadians.

Today, thirty-five years after usurping power from the people, assassinating its finest leaders and destroying the best experience we as Grenadians were having in developing our country, this group, just as they did thirty-five years ago, seeks once again to deceive the people into believing that they were the guardian and defenders of the Revolution – and not its destroyer. Their silence in upholding the ideals of the Revolution in the last thirty-one years until four years ago was deafening.

Now that the ground is favourable once again, thanks to the work done since 1983 through the Maurice Bishop Patriotic Movement (MBPM) and the Martyrs Foundation, their voices have become strong again. We call on the people never to be fooled by them again for they are only wolves in sheep’s clothing.

The Maurice Bishop and October 19th Martyrs Foundation takes this opportunity to salute the 40th Anniversary of the People’s Revolution of 13th March 1979 which ushered in a period of unprecedented unity, economic growth, social progress and community development, the likes of which was never seen in the history of our country.

Were it not for its premature ending, Grenadians would have been celebrating forty years of progress and prosperity rather than be commemorating the 40th anniversary of an ill-fated experience, faded memories, shattered dreams and a nostalgia for what could have been.

The lessons of that period are still very profound and should be properly recorded and taught in schools so that the present and future generations can draw from them as part of the overall Grenadian experience that has brought us to where we are today. For those who actively participated during its existence there can be no doubts or regrets that despite its errors, it was the finest period of our independence.