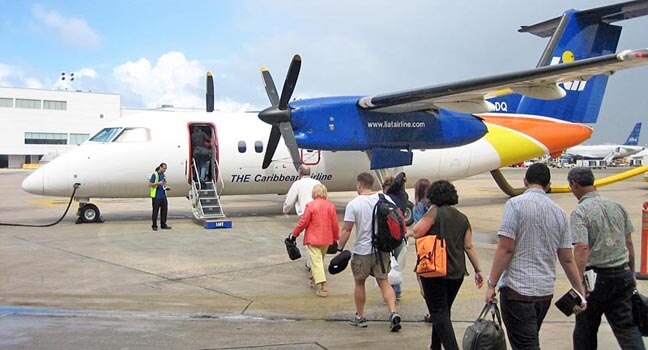 A leading local expert in the civil aviation industry has said he is not in favour of any attempt to bring back on-stream the Liat brand and identified two regional Prime Ministers as the ones responsible for the demise of the island-hopping carrier in the region.

In an exclusive interview with THE NEW TODAY, the official who did not want to be identified said that a total new entity should be created to serve the region and not go back to the old name that brings with it too much negativity.

He warned regional governments against seeking to resurrect Liat due to a number of factors including what he said was “an unruly staff”.

“If I was an investor I wouldn’t want to have that – I would have to have a new airline. Why would you want to have a brand that has been dragged to the mud? You need a new brand. Anything that’s being resurrected from the ashes I can’t recall one.

The industry executive noted that many airlines that were rebranded over the years like Swiss Air and others came back with a different name.

He stressed that once an airline brand has been denigrated and is brought back without significant changes even the debts would follow it.

“Why they think they can operate with the same brand name and are not obligated to pilots and employees?

According to the airline official, even agents and passengers can take court action for refund of monies owed to them.

He identified another drawback from Liat operations is the fact that travel agents throughout the world especially in North America cannot book passengers on the airline because they have not made it possible through the system being used for bookings.

He said that Liat used to play an important role when it came to connectivity with other major airlines flying into the region.

“You get off an international flight in one Caribbean island and it was guaranteed that there was a connection flight to tackle passengers to their final destination in the region,” he added.

The airline industry official acknowledged that his company made thousands of dollars over the years from the operation of Liat in promoting and selling the airline but what exists now “is not the same Liat, it’s just the name”.

“You can’t resurrect a brand that has been denigrated in the same way when Caribbean Airlines was formed they dropped the name BWIA because it had been vulgarised too much,” he said.

He noted that BWIA was associated with all kinds of negatives in the public domain including lateness and things like “Better Walk If Able.”

According to the official a brand new name was chosen for the BWIA successor “that wouldn’t have an acrimony that many people would make fun of.”

The industry expert stressed that the frustration is real in the region among the travelling public about the lack of intra-regional airline transportation.

He said that people are facing severe difficulties in moving from one island to the other as was the case in years ago with a vibrant Liat as there is also limited connectivity in the region.

He was also highly critical of the current Lia website, describing it as promoting an airline “that doesn’t make any sense and nobody proof reads what they even put out.”

He said the website is lacking in providing alternative days for travelling and to resurrect Liat is just “a bit of a comic strip.”

In addition, he said that there is no innovation, no utilisation of the aircraft service within the region late at night.

“Why can’t we have a late night flight at 10 o’clock at night and therefore the fare will be cheaper when the aircraft will otherwise be sitting on the grounds in Antigua?

“There are many things they could do but there is no innovation and nobody gives a s..t because it is not a private business whereas private airlines will operate differently.

“When you have multiple governments pulling their strings left, right and center in a resurrected Liat… makes no difference – the same, same old shoes.

The official spoke of information circulating that the newly installed Congress government of Prime Minister Dickon Mitchell has earmarked about EC$2-3 million in the form of revenue guarantee for Liat to fly into the Maurice Bishop International Airport (MBIA).