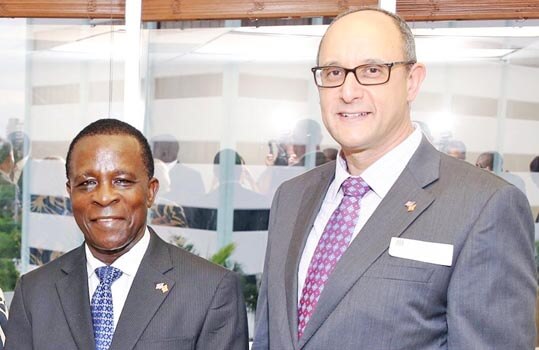 Prime Minister Dr. Keith Mitchell and former ambassador Warren Newfield who have parted company with a war of words

The rift between Grenada Prime Minister Dr. Keith Mitchell and former Ambassador, Warren Newfield could be related to a dry up of funds from the Kimpton Kawana Bay resort developer in Morne Rouge to the coffers of the ruling New National Party (NNP) government.

A source close to the parties told THE NEW TODAY that events surrounding the fall-out between the two could have played a role in the recent resignations from the Citizenship By Investment (CBI) programme by its Chief Executive Officer (CEO), Percival Clouden and Chairman of the Board of Directors, Senator Christopher DeAllie.

He said that both Clouden and DeAllie were not happy with the recent turn of events within the passport-selling scheme and in particular with some decisions allegedly taken behind their backs by a female board member with close ties to Prime Minister Mitchell.

He claimed that Clouden got so fed up with the situation that he decided to tender his resignation from the high-profile job.

“That’s why Percy walked. Percy said he wasn’t going to be part of something that he does not feel was right. If you talk to Percy now he tells you the truth. He said …. there were a lot of things that were not right,” said the source.

Clouden who quit the post suddenly in February has denied any rift with the Prime Minister on CBI and insisted that it was done mainly on health-related grounds.

According to the source, the Kimpton Kawana Bay resort outfit is no longer pumping huge financial resources into the ruling party in Grenada which has been forced to now turn increasingly to the Silversands group involving Egyptian billionaire investor, Naguib Sawiris as its financial saviour.

He said the powers-that-be in Grenada are now leaning more in the direction of the Silversands financiers and bent on influencing decisions taken at the CBI programme level in its favour over that of Kimpton.

The source quoted Clouden as saying that the current rulers in Grenada now consider Silversands as “the blue eye boy” in the scheme of things and has relegated those at Kimpton which no longer provides large cash amounts on a regular basis to the ruling party.

He said that Clouden was asked to do certain things in favour of Silversands over Kimpton and he flatly refused to do so.

“He said I am not following that instruction because everybody must stand on the same table. I don’t want nobody standing below the table but they (are) getting the same rights as the people that standing on the table.”

“Percy was not backing down. It went to higher level (in government) and Percy insisted that he was not going to touch it and he walked out of that meeting and took his decision – I am not staying here for nobody to threaten me that I have to (do) this and I have to (do) that… the rules are for everybody.

Clouden was said to be adamant that he will not risk his reputation as a retired reputable banker in the Virgin Islands for questionable dealings in Grenada’s CBI.

Newfield has accused the Mitchell-led government of being anti-private sector business after the regime in St. George cut off its access to millions of dollars in the passport business.

Prime Minister Mitchell responded by labelling the ex-Ambassador as a racist and of failing to account for proceeds from the sale of passports.

The foreign developer has filed a major lawsuit against the NNP administration before the U.S-based International Centre for Settlement of Investment Disputes alleging that the Mitchell government is deliberately trying to frustrate the completion of the luxury resort.

THE NEW TODAY understands that the Silversands group has been bolstered in recent months with its recruitment of three high profile members from the team that was once put together by another major player within the NNP elaborate system of financers, British businessman Peter deSavary.

“All three of them have gone to work with Silversands,” said the source who identified a key member of the team as former Press Secretary to Prime Minister Mitchell, the Barbadian former journalist with The Nation newspaper, Barry Collymore.

Collymore was recently appointed by the Mitchell-led government as Chairman of the Grenada Tourism Authority (GTA) and is also involved in a controversial Chinese-funded 120-room hotel in the Lance Aux Epines area in the south of the island that is meeting stiff resistance from nearby homeowners.

In April, Collymore surfaced as the co-founder of the West Indies School of Hospitality (WISH) along with another associate of Silversands, Ambassador Danny Fakre to create in collaboration with ECornell, an online learning platform of Cornell University.

WISH plans to offer 600 online courses and lessons delivered through eCornell on topics including service excellence, hospitality leadership and food and beverage management.

The courses will be offered annually to persons working in the hospitality industry and to hospitality students.