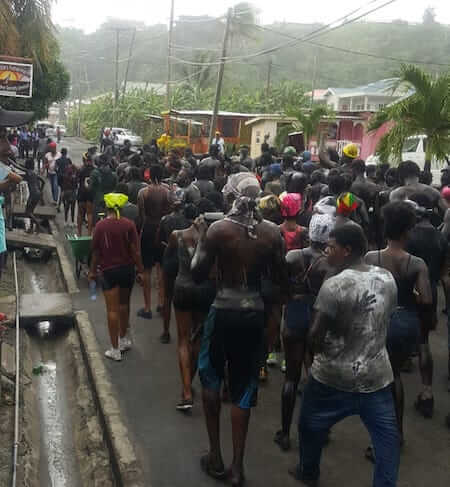 Hundreds of Grenadians defied orders from the government of Prime Minister Dr. Keith Mitchell and played mainly Jab Jab mas throughout the island over the weekend and especially on Carnival Tuesday despite of the passage of regulations in Parliament to outlaw Carnival activities this year due to the coronavirus pandemic.

The popular Sauteurs J’ouvert on Tuesday saw the biggest gathering of Jab Jab masqueraders from early this morning.

The Police were out in numbers but were unable to prevent the Jabs from taking over the street especially in an area known as Low Town.

Most of the chants in Sauteurs were anti-government and directed at the country’s ageing 74-year old Prime Minister Dr. Keith Mitchell who has had a stranglehold on the political life of the country since 1995.

Signs are growing in the country since the pandemic resulted in a lockdown of the country in March that Prime Minister Mitchell who is not visible is losing his grip on the island.

The Mitchell-led government has tried to limit the gathering of persons in numbers and calling for the wearing of masks to limit any spread of the deadly virus on the island.

However, the regular Jab Jab masqueraders have seemingly decided to challenge the order of the government for no Carnival this year after videos circulated on the Social Media platform about the Cyber Monarch competition held among social artistes at the National Stadium over the weekend.

Political observers on the island concluded that the Soca monarch event sent a message to the rest of the country that the law passed in Parliament to cancel Carnival this year does not apply to those persons who are close to the ruling New National Party (NNP) regime but only for the rest of the citizens.

A noted political commentary said that this event resulted in persons who were thinking of heeding the warning from government not to participate in Carnival-like activities this year and took a last minute decision to come out in numbers since Saturday and into Monday and Tuesday to play Jab Jab.

One resident in Sauteurs told THE NEW TODAY that the police attempted to put the Jabs into a confined area by the Bus Terminal this morning but were unsuccessful.

He said the Jabs had passed the police who were on the side of the road and moved towards the Bus Terminal but were followed by the Police who attempted to block them from coming back up the street.

According to the eyewitness, he noticed that the Jab Jab crowd was getting much bigger and was turning into “a massive gathering” and feared that if they decided to come back up the street the police would not be able to stop them.

“The amount of Jabs that I saw building up there once they decide to come through the police nothing can’t stop them – and so say, so done. The police just let them go through,” he remarked.

There was an equally big gathering of Jabs around the same time in the neighbouring village of Hermitage as masqueraders also took to the street to play their mas in defiance of the order given by Prime Minister Mitchell.

The scene in Grenada is similar to 1977 when then Prime Minister Eric Gairy imposed a ban on the play of Jabs in the town of St. George.

The Gairy move was resisted as thousands of Jabs stormed into the city to play their mas.

Two years later, Gairy who was branded a dictator was removed from power in a 1979 coup d’etat staged by the left-leaning New Jewel Movement (NJM) headed by late Prime Minister Maurice Bishop.