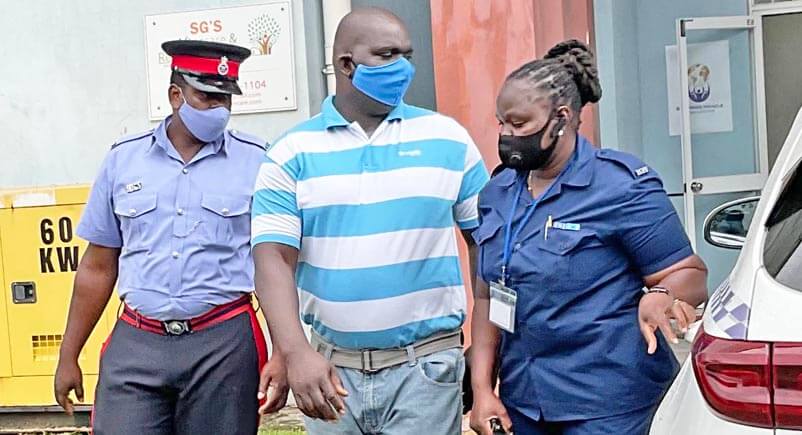 The St. George’s No.1 High Court on Monday empaneled a 12-member jury to decide the fate of Hesten Mark, the 30-year-old man, implicated on a Non-Capital Murder charge in connection with the April 2019 stabbing death of Kirt Fraser, 23.

Guyanese-born High Court Judge, Madam Justice Paula Gifford is presiding over the murder trial at the St. George’s No. 1 High Court, which is now sitting at the Grenada National Stadium, Queen’s Park, and not at the Clico building on Young Street in order to fall in line with Social Distancing protocols due to Coronavirus.

The murder accused, also known as ‘Bolo’, is originally from Soubise, St. Andrew but resided at Beaulieu, St. George at the time of the incident.

Mark was 28 years old when he allegedly stabbed Fraser in the stomach with a small knife during a physical altercation that occurred in front of Shirmme shop near the Fond playing field in St Patrick, during the early morning hours of Sunday April 28, 2019.

There are conflicting reports about what might have triggered the physical confrontation between the deceased and the father of two, who is currently on remand at the Richmond Hill Prison.

U.S-American-trained Attorney-at-law Jerry Edwin is representing the accused while Senior Crown Counsel in the Office of the Director of Public Prosecution (DPP), Howard Pinnock is handling the matter on behalf of the State.

THE NEW TODAY understands that prior to the stabbing incident, the deceased and some of his friends had a verbal altercation with Mark, a longstanding security guard with Mega Force Promotions, who was on duty manning the entry gate to the Pure Grenada Cup which was being held at the Fond Playing Field.

According to sources, the dispute arose over the decision of the deceased to deny them entry into the arena with children’s tickets and this resulted in an exchange of harsh words including threats.

There are reports that as a truck transporting Mark and his colleagues from the event, which ended around 1a.m., passed by the nearby shop where the deceased and his friends were spotted drinking, someone reportedly threw water and alcohol on Mark.

The murder accused reportedly got off the truck and was soon involved in a physical confrontation with Fraser who received three (3) stab wounds to the chest from a knife, which allegedly broke with the blade remaining embedded in his body.

In an exclusive interview with THE NEW TODAY following Monday’s court proceedings, Attorney Edwin pointed to the irony of the situation in light of his client role as security detail in which he was “a peace maker,” while on duty at these type of events.

According to Edwin, these events are known to “attract a level of unruliness from people who attend, especially young men and it is his job to ensure that the safety of persons who attend and to ensure that there is a smooth transition between the gates and to the Fond playing field in this case where the event was happening.”

During Monday’s hearing, the Senior Crown Counsel requested an adjournment to allow him the opportunity to visit the crime scene to better appraise himself of the location where the incident occurred.

The female High Court Judge agreed and the trial was adjourned to Wednesday, when the Prosecutor was expected to call the first of 13 witnesses to give evidence to the Court in the murder trial, which is expected to last for approximately two (2) weeks.

Other relatives of Mark’s family – his father and a brother have also faced murder charges in the past.

Mark’s father had been tried for the death of a man whom he hit with a bat at a St. Patrick playing field several years ago and his brother was also charged for the stabbing death of a Soubise man about two years ago.