Gregory Bowen – signed the Promissory Notes on behalf of Government

THE NEW TODAY has seen a document giving details about the US$3 million Promissory Note that the Keith Mitchell-led New National Party (NNP) government signed with the Florida-based WRB Enterprises as part of the US$63 million deal to lay its hands on its majority shareholding interest in Grenlec to bring an end to 26 years of warring between the two sides.

The agreement was signed by Finance Minister Gregory Bowen, the Number Two Man in the regime who has been in the forefront of the fight to regain control of the company that was privatized in 1994 by the then National Democratic Congress (NDC) administration of late Prime Minister Sir Nicholas Brathwaite.

Under the arrangement, government has to pay the US$3 million within the next two years to close-off on the repurchase of the shares.

Bowen’s initialing of the deal comes against the backdrop of a debate in Grenada about the source of funds by the Mitchell government to satisfy a court judgment that went in favour of WRB Enterprises on a buy back clause in the agreement for the shares.

Opponents of the Mitchell regime have been questioning the legality of the transaction for the funds given the different answers given by senior government ministers on the source of funds for the repurchase of the shares.

The initial position of the government in the Botanical Gardens is that the funds came largely from savings on the capital account due to Covid-19 which prevented the administration from implementing a number of capital projects plus savings accumulated from 2013 onwards due to “good fiscal management”.

When pressed for specifics, a senior government minister said the Grenlec deal was financed by grants and concessionary loans from the 2020 Budget.

However, Parliament was told at a sitting on January 15 that the repurchase transaction was financed by savings on the capital account of the 2020 Budget.

A former official in the Ministry of Finance has challenged the explanation, insisting that the funds came from the sale of passports through the Citizenship By Investment (CBI) programme that were deposited in the National Transformation fund through which most of the capital projects in the annual Budget are financed.

As a public service, THE NEW TODAY reproduces from the document obtained from the Ministry of Finance, some of the details about the Promissory Notes that were entered into by Minister Bowen. 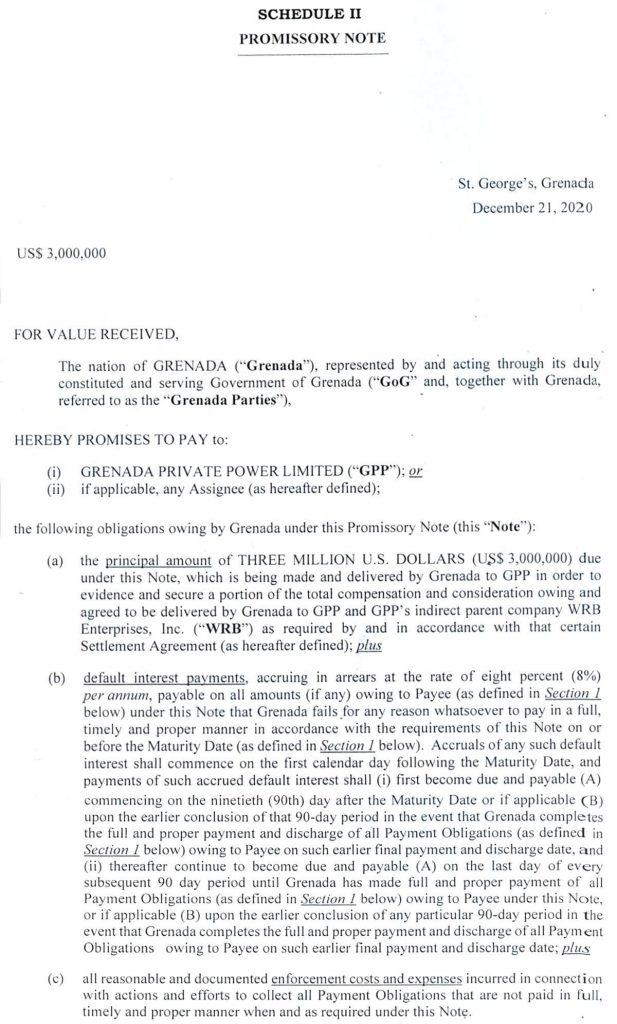