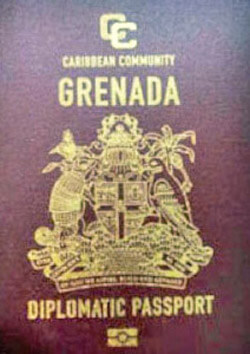 Fingers are pointing at three former ministers in the defeated Keith Mitchell-led New National Party (NNP) administration as being embroiled in the botched sale of a diplomatic passport to a Polish national who is asking back for the funds handed over for the prized Grenadian national asset.

Prime Minister Dickon Mitchell addressed the issue Monday night at a Town Hall meeting at the Trade Centre to report on the first 100 days in office of his National Democratic Congress (NDC) administration.

He said that the deal was struck close to the June 22 general election and that a Cabinet Conclusion specified that the individual should pay US$290, 000.00 into the Consolidated Fund but US$140, 000.00 was diverted to the NNP Constituency office in South St. George.

Speculation is rife that some of the funds were used by the NNP during the campaign in which they lost the seat of government 6-9 to Congress.

The information about the deal was first reported in an article in the international media in which a sacked Antiguan envoy Kemal Nicholson is implicated in the illegal sale of the Grenada diplomatic passport to a questionable character.

According to the source, NNP’s defeat at the hands of the Dickon Mitchell-led National Democratic Congress (NDC) upset the plans of the NNP ministers involved in the scheme to provide the diplomatic passport to the individual who is reportedly now asking back for his funds.

“It’s about money, money,” he said of the dealings of the ex-NNP government ministers.

He pointed out that some NNP ministers are “too greedy” and see the sale of ambassadorship “as the big prize” to make quick bucks.

“Days before the election them men went and cut that deal for a diplomatic passport. They lost (the election) and they can’t deliver and the man wants back his money,” he said.

He said the sale of diplomatic passports is illegal and vastly different from the sale of those CBI passports which is legitimate business.

According to the insider, the non-return of the funds have been “brewing for a while” between the conned businessman and the ex-NNP government ministers.

He said that a fourth NNP ex-minister has been approached to help raise funds to repay the Polish man but he has apparently decided not to get involved.

“All they could do is give back his money – all who jump up in the money,” he added.

The insider said he believes that the ex-NNP ministers did not spend all the money collected from the businessmen in the election campaign but held back some for their own personal use.

“A lot of money went into men’s pockets,” he told THE NEW TODAY.

He said the NNP ministers used “the banking channel” right under the nose of the Financial Intelligence Unit (FIU) and the Integrity Commission to put their hands on thousands of dollars from the sale of the diplomatic passport.

He blasted the Integrity Commission, headed by female Attorney-at-law, Anande Trotman-Joseph as nothing but “a farce” and accused it of turning a blind eye to operatives of the NNP.

“They (Integrity Commission) did their work relative to Grenadians and they closed a blind eye for NNP operatives,” he said.

He stated that the local commercial banks will always do their work and spot the “suspicious activity” and will send it to the relevant person or body to handle it but unfortunately “nothing happens” whenever it involves high-ranking NNP officials.

“We see small man building big houses in Grenada – they have no means of getting that kind of money but it was going on because them men were well connected. When you are well connected, banks do what they have to do but the government department doesn’t do anything – that was well-established a while now,” he remarked.

He said the banks are in the clear where wrong-doing is concerned and do not co-operate with those engaged in suspicious activities.

“They will inform the relevant body who in some cases turned a blind eye especially if the person involved was a well-known connected NNP operative.

Asked if the local banks cannot send back the suspicious money and do not allow it to pass through their system, he said: “No, no. The bank can stop deal with a client based on the evidence they have (that) they are a drug dealer or so but if a high government official comes and takes a big piece of money he has to declare and the bank will say well this is the declaration – this is way above what it should be – you (the government agency) investigate. The bank won’t stop dealing with a high-up man.”