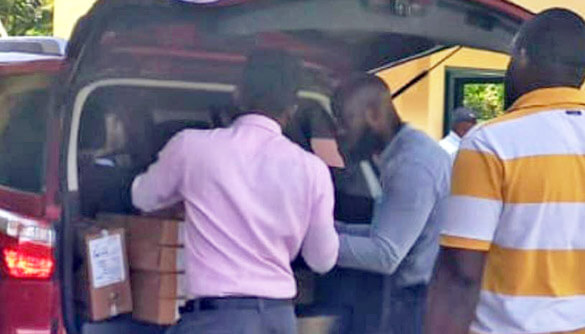 A former Permanent Secretary in Grenada has raised serious questions over the go-ahead given to the controversial Financial Intelligence Unit (FIU) four days after the change of government to collect computers from the Office of the outgoing Prime Minister, Dr. Keith Mitchell.

New Prime Minister Dickon Mitchell was sworn in last Friday as Prime Minister after leading his National Democratic Congress (NDC) to a 9-6 victory at the polls over the Keith Mitchell-led New National Party (NNP).

The Royal Grenada Police has sought to defend the action involving the FIU by stating that the agency was collecting brand new computers that were ordered for it by the Information Technology Department of the Office of the Prime Minister prior to the June 23 general election.

However, the ex-senior government employee said it does not matter whether the computers were old or brand new the issue at stake surrounds the sensitivity of the timing given the fact that a new administration is trying to take office from the previous one headed by Dr. Keith Mitchell.

“It doesn’t matter if the action is legitimate or not, even if they were new computers that were there (in the boxes) and they just happened to go there to remove them. The point is anybody seeing that will immediately raise a red flag – and that is ABC. You can’t do that. This is ridiculous. That kind of behaviour should never be condoned. Why anybody allowed them to do it, I don’t know,” he told THE NEW TODAY.

The retired public officer stated that anyone loyal to the former Mitchell government could have used the occasion to slip out with more than just computers but also important documents that they do not want fall into the hands of Prime Minister Dickon Mitchell and his new regime.

“Grenadians voted for change and there must be change and that one isn’t consistent with the change that people have voted for,” he quipped.

For nearly ten years, the FIU was headed by the current Deputy Commissioner of Police Tafawa Pierre, the husband of former Education Minister, Emmalin Pierre who was only brought back about four months ago to serve as a full-fledged member of RGPF.

Related:  US$10,000 paid to ‘”Middleman” in Polish diplomatic passport sale

The ex-Permanent Secretary felt that heads should roll within the public service for allowing the FIU to remove computers from the Office of the Prime Minister when the new government is not fully in place at the moment.

He said: “The fact that you have a new administration coming into office and sensitive information are likely to be on those computers, it is highly ridiculous and immature for the FIU to remove computers from the office.

“It really doesn’t matter whether or not the action of the FIU is legitimate. What is important is the message that is being sent to the ordinary man on the street and what is that message – the message is that you are removing information that you think may be detrimental to the outgoing administration and that should never be tolerated.

As far as I am concerned the Commissioner of Police should pay a price for that because he must be aware of the action of the FIU and as a leader of the RGPF he should have informed them not to take such action. This cannot be condoned,” he said.

“NDC had suffered under the hands of some of these people in the past and they cannot allow any such thing to go on.”

THE NEW TODAY understands that Prime Minister Dickon Mitchell has ordered a full investigation into the FIU computer issue.

The following statement was issued Monday by RGPF on the incident: “The Royal Grenada Police Force refutes claims currently in circulation inciting the unauthorised or illegal removal of government property by officers attached to the Financial Intelligence Unit (FIU).

In fact, officers were engaged in transporting computers that were recently procured by the Ministry of ICT and handed over to the Unit today (27.06.2022) for use by the FIU. There is nothing sinister about the transaction, since all the required protocols were followed.

Therefore, as an organisation, we remind citizens that transmitting of false information violates the Electronic Crimes Act, and as such, strongly discourages the formulation and transmission of misinformation.

The RGPF anticipates the understanding and cooperation of everyone.”