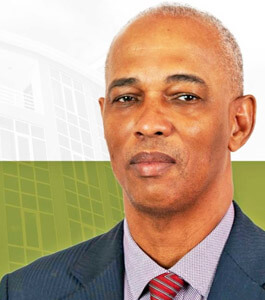 Board Chairman Benedict Brathwaite – has a task on his hand

One of the first acts of the newly appointed Board of Directors of the cash-strapped Grenada Electricity Company (GRENLEC) is to get all the facts concerning reports that the utility is seeking to borrow EC$15 million dollars to meet demands from the Technical & Allied Workers Union (TAWU) for salary increases and fringe benefits to its employees.

A source close to the newly elected National Democratic Congress (NDC) administration of Prime Minister Dickon Mitchell said the administration is very much concerned over an article that appeared in last weekend’s e-paper of THE NEW TODAY about this multi-million dollar loan.

He said he expected the new Board, headed by former Financial Controller of Grenlec, Benedict Brathwaite to get its briefing in the coming week in order to understand the financial situation facing the company.

“You can’t have the company putting pressure on the citizens of the country in any way so it becomes unsustainable.

“It’s not going to be easy. It appears that things are in a bad way,” he said as he made mention of the newspaper article.

“It’s going to be tough. One has to just hope that you can get some stabilisation of whatever the problems are. If you can stabilise it and then try to recover it (the situation),” he said.

The government official went on to say: “The first task has to be stabilising – putting a halt to the adverse direction that the company’s finances seem to have gone in – making sure that doesn’t continue and then trying to restore some of the financial positions that it had before.”

George is a former manager of Grenlec, Pitt is the heads of Lime operations on the island, St. Bernard is a female attorney-at-law by profession, Thomas is a Geo-technical person, and Antoine is known as a popular mas band leader from the rural St Patrick East constituency.

The board is completed by several other persons who were already directors prior to the June 23 change of government – attorney-at-law Winnifred Duncan, who was elected to serve at the last Annual General Meeting (AGM) of Grenlec, as well as Dorset Cromwell the representative of the National Insurance Scheme (NIS) on the board, and Linda George-Francis, the representative of the Grenada Employers Federation (GEF).

The government official noted that any loan taken by Grenlec means that the consumers will have to pay for it through their electricity bills.

He did not want to blame the management of Grenlec for signing onto a controversial deal with TAWU that would place the company’s finances in a rather precarious situation.

According to the official, the fact that the issue had to go before the Ministry of Labour shows that the Grenlec negotiating team was very resistant to the demands being made by TAWU.

He said it is not clear at this stage whether the then Minister of Labour Peter David had put pressure on Grenlec to sign off on the deal with the union in the midst of the political campaign but pointed out that the settlement took place “very quickly” and might have been to the disadvantage of Grenlec.

TAWU and GRENLEC have been at loggerheads for months over negotiations to reach agreement on amendments to be made to the existing Collective Labour Agreement.

The Grenlec management is said to be waiting on the newly elected Board of Directors to hold its first meeting in order to give approval for the multi-million dollar loan to settle the agreement with the union.

A source to the company is quoted as saying that securing the loan “is the only way out” for GRENLEC at the moment as it does not have the funds on hand to make good on the pre-election deal that was brokered by then Labour Minister, Peter David, to get workers to end strike action.

The GRENLEC management is fearful that if they pay the money from their existing funds at the bank as demanded by the Union, it will severely affect their financial position.

The island’s sole power generating company has between 160-170 workers on its payroll.

The Keith Mitchell-led administration took back control of GRENLEC some 19 months ago after it lost an international arbitration tribunal hearing that forced it to find over EC$200 million to repurchase the controlling shares from ‘WRB Enterprises.’