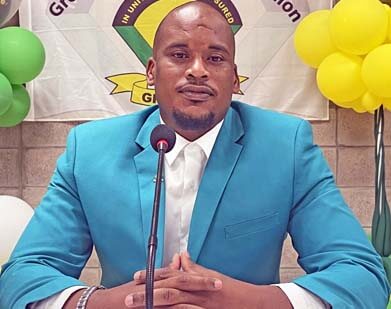 There has been a reprehensible practice by those in authority to approach unestablished (temporary) workers and ask them to forego their years.

Those are the words of President of the Public Workers Union (PWU), Brian Grimes as he attacked the posturing of the Keith Mitchell-led ruling New National Party (NNP) administration towards some sections of the public service.

In an exclusive interview with THE NEW TODAY, Grimes said that the authorities are approaching workers, even some in their late 50s, to get them to sign 2-year contracts, and forgo their 18, 20, and 22 years of service and to lose their long term benefits.

“Who does this – who does this to their people?” asked the PWU boss who accused the NNP regime of trying to “disenfranchise” the workers, some of whom are nearing retirement, and are anticipating their ex-gratia payment, which is similar to but smaller than a government pension and is made without the giver recognising any liability or legal obligation.

The PWU Executive is currently compiling workers’ data, and a list of recommendations to address the outstanding issue of regularisation within the public service to be “presented to the Ministry of Labour within the coming days.”

Grimes acknowledged that in the past the union may have fallen short in regards to the collection of data to bring to the negotiating table “in the interest of members”.

However, he is optimistic that the union can now bring forward evidence of those workers who are directly affected with respect to “where they are, who they are, and that they should be regularised and treated better” once the ongoing data collection process is complete.

This, he said, is part of a new strategic approach adopted by the union to ensure that disenfranchised workers are afforded the security of tenure, and entitlement to all the other benefits being enjoyed by permanent workers.

According to Grimes, he is optimistic that “we can fix this matter at the table, and government should realise the error of their ways.”

“…We cannot put legal action off the table because we can consult our legal counsel, and take this matter to court because this matter is clear, Ray Charles (the blind U.S singer) can see this is unfair, illegal and immoral,” he said.

PWU Public Relations Officer (PRO) Daisy Hazzard, who also spoke with THE NEW TODAY on the issue, noted that there are workers who have been working on contracts in the public service for over 20 years.

She said, while there has been some “non-committal” action on the part of the government “to say let’s identify these persons, and see how we can begin to rectify the problem, there has not been a systematic and a concerted approach to say let us really work on this.”

She explained that “in 2019, we had agreed with the government to begin to look at the process together with the DPA (Department of Public Administration), we started that process, we had one meeting and then because of the pandemic that got derailed.”

“…It seems to have been a sort of laid back approach or part of the process is started and then it just falls through the cracks…there has been no evidence of the political will to rectify this process”.

Hazard pointed to an “inequity” in the Keith Mitchell government’s approach towards dealing with the issue of regularising workers.

She said:   “Up until 2015, there were about 650 teachers who were also not permanent (some for over 20 years) “and the Ministry of Education and this administration went through a process for about a year where they identified those persons and found a way to make them established.”

According to Hazzard “even though the government admits that there is a problem, what we have seen is that there seems to be a systematic attempt, even if the government has not said so, just to employ persons outside of the PSC”.

She placed on record the union’s position on the government’s policy to hire workers on contract outside of the PSC, which is the body that is constitutionally responsible for doing so.

“We were also told last year that there was not going to be any hiring of established workers through the PSC, and that government was following the contractual method,” she added, noting that “40% of our workforce are contracted, or don’t have a letter or have some letter, are unestablished or temporary.

Hazzard went on: “Throughout the public service when our members bring this data to us, the different types of contract or lack thereof that we see is astounding… so you (would) see some that look more like a contract, you see some (members) with just a letter saying we employ you.”,

“…There are persons who tell you I have nothing because maybe the letter that I had was destroyed in Ivan and nobody replaced it. Some persons who have no letters, for instance we say to them, go ask for a job letter, and supervisors deny them that because there is no policy or directive from the government that covers a contract worker.

“… It is left up to individual persons to determine how they treat with workers who are unestablished and that is where a lot of unfairness, inequity, and discrimination comes into play”.

According to the PWU PRO, the prevailing situation is such that “these young persons live at the companies that lend money because that’s the only way they can get by.”

“It’s a cycle of borrowing. So, they borrow from one then go to the next to pay off the other and this is what this administration has done to our young people,” she quipped.

“This period, the last 30 years to the present day now is going to be recorded as a period when the rights that are enshrined in our Labour Code and the Constitution, the rights that previous administrations such as revolutionary governments, parliamentarians like George Brizan stood up for on principle ethically to protect the rights of workers, today are being systematically eroded by an administration that seems to sit, and craft ways to get around the Constitution, the laws of our land, the laws that they are supposed to be the gatekeepers of, so that they can hire workers in ways that victimise and discriminate against them.”

Hazzard is of the view that “as the biggest employer” in the country, the fact of the matter is that the Mitchell-led administration practices a human resource policy that seeks to deny workers their rights and this is very sad.

“And when this period of our history is written, these men and women who are the architects of this destruction in our society, your name will not ring with a very nice bell…” she said.