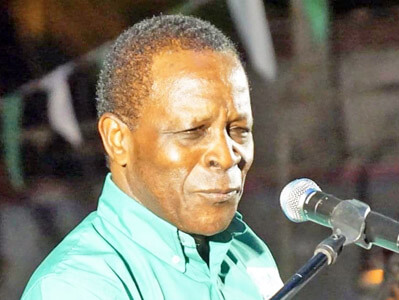 Dr. Keith Mitchell – being fingered for running a poor campaign

Pressure is mounting within the defeated New National Party (NNP) for aging Prime Minister Dr. Keith Mitchell to remove himself as quickly as possible from the top job in order to allow for someone else to take over and lead the rebuilding process following the 9-6 loss to the National Democratic Congress (NDC) in the June 23 general election.

A founding member of the party told THE NEW TODAY that the 75-year old Dr. Mitchell has now outlived his usefulness in frontline politics and it was time for NNP to look for a leader who will be able to compete with current Prime Minister Dickon Mitchell of Congress.

“He should step down – don’t tell him to resign, he doesn’t like that word. He should step down as leader of the party and call on the party machinery to organise a convention and among them select a leader so then you will have two and three persons vying for the leadership.

Right now if (Dr. Keith Mitchell) is retained as the leader to compete with the NDC is like a man showing up with Football gears to play a cricket match.”

The NNP insider called for an opportunity to be given to the rank and file members of NNP to see those persons vying for the job of Political Leader and to “assess them and vote for a leader of their choice – don’t impose a leader on them.”

He suggested that the newly elected leader should then take over from Dr. Mitchell as the Leader of the Opposition in Parliament and start the rebuilding of the party.

Former Agriculture Minister Peter David, a former General Secretary of NDC is known to be interested in the NNP top job as well as Emmalin Pierre who served as Minister of Education and won her St. Andrew South-east seat in the general election.

According to the NNP official, the ousted Dr. Mitchell should accept full responsibility for the party’s defeat at the polls at the hands of NDC.

He chided the defeated Prime Minister for always scoffing at Congress during the election campaign and never took the challenge from the opposition as serious and often branded their promises to the Grenadian people as nothing but “a pie in the sky.”

He also faulted the ex-Prime Minister for trying to use Parliament as well as the NNP platform in the campaign to try and belittle and dehumanise new Prime Minister Dickon Mitchell too often.

The NNP high-ranking member stated that the electorate were clearly not amused by the constant dodging of “the live press” by Dr. Mitchell who was refusing to answer questions and was constantly trying to “control interviews and (press) conferences” with specially selected journalists and media personnel during the campaign.

He noted that NDC’s Dickon Mitchell was very transparent and was always prepared to answer questions from just about any journalist or media personnel“on his plans and policies and defend his record as a lawyer.”

During the election campaign, the NNP often tried to paint Dickon Mitchell as a corporate lawyer” who was anti-Working Class and never defended them in court matters.

The veteran party member also said that another issue which contributed to the NNP loss at the polls was the failure of Dr. Mitchell to put the party’s machinery into place to fight the election.

He said the back-to-back 15-0 victories at the polls against NDC in 2013 and 2018 led to arrogance within the ranks of the NNP and played a part in the downfall of the former Prime Minister as he took Grenadians for granted.

He indicated that some campaign personnel often did not tell the defeated Prime Minister the truth about the political situation on the ground, especially as some of the candidates were in deep trouble with the electorate in their constituencies.

According to the party insider, these persons often told Prime Minister Mitchell “what he wanted to hear” and constantly misled him with respect to the truth.

He cited a situation in the constituency of Carriacou & Petite Martinique where the former Grenadian leader paid a visit in which most of the people who welcomed him on arrival in Petite Martinique were brought in from Carriacou and that less than ten persons from the island were actually in the welcoming party to greet and dance with him.

He described it as “a false hope with a make-up crowd” which was not detected by Dr Mitchell.

The NNP insider acknowledged that the Dickon Mitchell-led NDC had a far superior election machinery to the normally well-oiled machinery of the NNP and was even much better than the then ruling party in the ground game.

He also touched on some other issues which took place prior to the June 23 election that contributed to the downfall of Dr. Mitchell and NNP at the polls.

He said that one of the first warning signs came during the height of the Covid-19 pandemic in which those Jab Jabs showed defiance to the banning of carnival.

“They defied Keith Mitchell and played their jab jab mas,” he remarked.

The party official stressed that instead of calling the deviant youths and engaging them in a conversation, the former Prime Minister went to Parliament along with then Education Minister Anthony Boatswain, Foreign Minister Oliver Joseph and Finance Minister Gregory Bowen and chastised them.

He took issue with the use of their Parliamentary privileges by the NNP MP’s “to knock down the jab jab and to condemn the Jab Jab.”

The party insider said that he did not support what the Jab Jab did but Prime Minister Mitchell should have used the opportunity to call them for a “civil engagement.”

He also identified as a contributing factor to the defeat of NNP at the polls the growing dislike for then Prime Minister Keith Mitchell following the decision of the Police Force to pick up the President of the Grenada Union of Teachers (GUT), Jude Bartholomew and question him about the series of protest action against government.

He recalled that supporters of the GUT and their President came out spontaneously despite the lockdown of the country from the Covd-19 pandemic “to seek their leader” which was another warning sign for the NNP with the upcoming general election just around the corner.

The top NNP member noted that a major religious leader on the island raised concerns about the detention of Bartholomew as the hierarchy of the government was left flat-footed and became dodgy in giving answers.

“That wasn’t a plus for Keith (Mitchell),” he said, adding that this had the chilling effect of persons seeing the then Grenadian leader as being anti-worker.

The party official also identified another negative for former Prime Minister Mitchell in the campaign as his outburst at a meeting in New York in which he labelled workers at the General Hospital including doctors and nurses as “chicken thieves”.

He said the outgoing Prime Minister blundered when Teachers and public officers took to the streets to march for their Pension, the NNP-led regime deployed police officers including members of the para-military Special Services Unit (SSU) to engage them in riot gear.

He added that this action was interpreted in some quarters that Dr. Mitchell was behaving like “a dictator” and backed it up by calling teachers and public officers as “too greedy” as other sectors of the economy had to be looked after financially.

The NNP member also suggested that Dr. Mitchell also had a believability problem as he had conned the so-called progressive elements in the society who joined him in a so-called “Project Grenada” initiative to run the country after the 2013 defeat of Congress at the polls.

He said it was felt in some quarters including the NNP that PM Mitchell had singled out Minister Peter David as next in line to take over the leadership of the country from him after the 2018 election but he might have engaged in deception with them on the issue.

“Keith fell through (with the Grenada Left) on Project Grenada by his own ego – he didn’t want to engage other thinking. All the hundreds of other persons who went with him on that idea left and went back to the NDC,” he quipped.