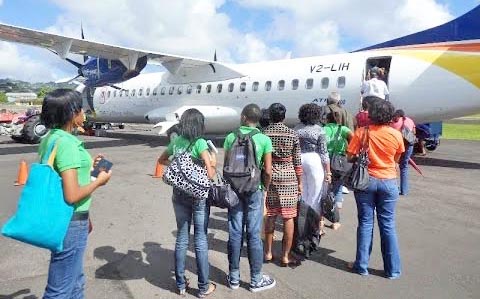 The Grenada Hotel & Tourism Association (GHTA) has expressed disappointment over reports that the region’s island hopping air carrier, LIAT will most likely not be able to take to the skies again.

A spokesman for the association said that the hotel body was looking forward to guests returning to many of the plants on the island in which intra-regional travel is an important component of the tourism sector with Liat at the forefront.

He told THE NEW TODAY that the GHTA is “very disappointed to see that Liat’s demise is going to make that very difficult for travelers from the region coming to our island especially Trinidad”.

According to the official, Trinidad is “one of our biggest customer bases” and that Grenadian hoteliers were looking forward to visitors from the twin island republic when the government of Dr. Keith Rowley in Port-of-Spain reopens its borders to the outside world.

“That was an area where we could have looked forward to a substantial number of tourists coming from -that’s another nail in the coffin quite frankly,” he said.

The official pointed out that regional tourism cannot happen with the demise of Liat which was forced to ground all flights due to the coronavirus pandemic.

Earlier in the week, the Prime Minister of St. Vincent and the Grenadines, Dr. Ralph Gonsalves, who is a major player in Liat, announced that he was pushing for stakeholders to meet shortly to discuss the effect that COVID-19 is having on the cash-strapped airline.

The current opinion among regional leaders, who are shareholders in the airline, is that LIAT would go into insolvency.

In a statement issued Monday to staff of the airline, Dr. Gonsalves said that over the past few months LIAT has been challenged as a consequence of the COVID-19 pandemic, and the financial state is that “LIAT is unable to pay its debt”.

“As you are aware, since 2017, LIAT has been struggling to recover from a devastating hurricane season. A general meeting of all shareholder governments has made every effort to support the airline. However, with the current pandemic affecting all sectors of national economies, the major shareholders (are) unable to give LIAT needed support,” the Vincentian leader said.

Dr. Gonsalves noted that the Board of Directors and major shareholders agreed that the airline “cannot survive the crisis”.

Speaking on a local FM radio station in St. Vincent and the Grenadines, the Prime Minister disclosed that the airline has lost close to EC$35M, in addition to the more than EC$12M lost in 2019.

Dr. Gonsalves reported that the airline has some EC$83.9M in severance payment for “people who have vacation pay, and for all the countries it’s another EC$10M in vacation pay”.

He also noted that “LIAT doesn’t have any assets to pay anybody anything”.

Antigua and Barbuda’s Prime Minister Gaston Browne was the first to acknowledge that the airline would likely have to be liquidated.