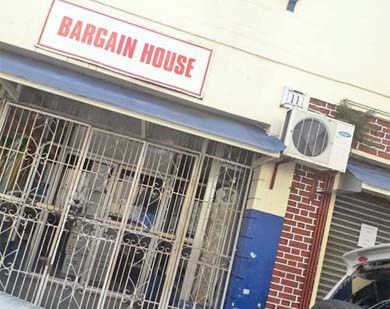 Bargain House - was one of the business places in St. George’s that moved quickly to close its doors

Grenada’s main city streets in the capital, St. George have become “a ghost town” as businesses closed their doors as the Covid-19 virus swept through the island.

THE NEW TODAY walked through the town early Monday morning and saw several of the private sector businesses shutting their doors.

This came against the backdrop of an address to the nation last Friday night by Prime Minister Dr. Keith Mitchell as Covid-19 figures continue to skyrocket in the country.

Three weeks ago, the count was just over 180 and today it is well over the 1400 figure as the virus took a grip on the island and started to affect workers in every sector of the economy including members of the Royal Grenada Police Force (RGPF), Public Officers and the Nursing profession.

Among the businesses which shut their doors to the public were Voyager, Bargain House, Bryden & Minors Stationery, Farm & Garden, Classic Collections, OM Distributors and The Computer Store.

“Basically the centre street in town (Halifax Street) is closed – all the stores on this street (are) closed,” said one shopper.

“I actually went and tried to get something inside there (Farm & Garden) and I could not have gone in because they indicated that they are not open to the public,” he added.

According to the shopper, the few people seen in town were complaining about the manner in which the businesses closed their doors to the public without any notice.

“I don’t think the Prime Minister has taken a very smart decision. What he should have done is literally lockdown the country and have this thing done properly but he has not done that. Basically the town is like late Saturday evening or early Sunday morning (without shoppers),” he said.

Related:  Thomas “Mr. T” Griffith: “God is not a God of corruption” and time for PM Mitchell to go from office

He mentioned that one person called him from the St George North-east constituency to indicate that they were having difficulties getting a bus to transport them into the city to do a business transaction.

“Some buses are just not working because it just doesn’t make sense for them to come out on the road and work,” he told THE NEW TODAY.

There has been mixed reaction on Social Media to the measures announced Friday night by Prime Minister Mitchell to order private sector businesses which fall outside the Essential Services act to close their doors.

The regime was accused of putting “money before people” by not heeding the calls in many quarters for a total shutdown of the country in the wake of hundreds of new Covid-19 cases and seven deaths from the virus on Monday.

One comment was: “…Every government office to collect money on behalf of the government is open while every (private sector) business to make money and employ workers is closed.”

The Mitchell-led New National Party (NNP) administration has announced plans to lockdown the entire country from 5.00 p.m. this afternoon until 5.00 a.m. on Monday in an effort to try and restrict the movement of people and the spreading of the virus.