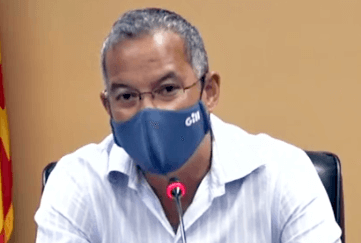 There’s deep division within the group charged with the responsibility to combat the deadly coronavirus in Grenada, by the Keith Mitchell-led government.

A key member of the team has distanced himself from the position taken by Health Minister Nickolas Steele and Acting Chief Medical Officer (CMO), Dr. Shawn Charles to lay blame on the activities on the Jab Jab masqueraders on August 9 and 10 for the rapid spread of Covid-19 in the country.

The member who choose to remain anonymous told THE NEW TODAY that the reduction in the quarantine period to two days for persons coming into the country is the major cause for the recent spike in cases on the island.

“There’s no doubt about it – it is the quarantine,” he said.

The member expressed alarm that despite the rising number of positive Covid-19 cases in Grenada that the ruling New National Party (NNP) government in the Botanical Gardens is still continuing to enforce the 2-day quarantine period.

He said the fact of the matter is that an individual who choose to visit Grenada can take the vaccine in his home country and still be infected with the virus on arrival in the Spice Isle.

He pointed out that people come into the Maurice Bishop International Airport (MBIA) but when health officials conduct the PCR test on them for the virus it shows up negative at the time.

However, the official said that a traveler can easily contract the virus in the United States and it will not show up even after the 2-days of isolation in Grenada for screening before the individual is released to go into the community.

“It is after they leave and they go out in the community and they mingle that is the time they start sharing it with people,” he told THE NEW TODAY.

According to the Covid-19 team member, he strongly believes that is how the Delta variant came into the island and got a foothold to infect thousands of people in Grenada within the past month.

He recalled a few instances in which the Ministry of Health admitted publicly that persons who came in tested negative but a few days later on their way out of Grenada tested positive for Cvoid-19.

He held the view that the virus was circulating within the community unknown to the authorities long before it became clear and persons who engaged in Jab Jab in August only helped to spread it.

The official stated that not only the Jabs should be singled out for blame but also those persons who got permission from the State and its agents to hold other functions on the island around the same time.

“Don’t fool yourself that thing (the virus) was already in the community – it was just a matter of time before people get it,” he said.

He also said he suspected that the authorities on the island did not have a clue for themselves that the virus was already spreading throughout the island and that the situation soon got out of control.

“All of a sudden things just start popping up, popping up – the numbers just start growing. If you look at it – the Jab Jab didn’t go nowhere to say they come back (with the virus).

“This thing was there before. It was there already. It was here manifesting itself throughout the communities.

The official also pointed an accusing finger at returning students of St George’s University (SGU) as a possible source for bringing the virus into the country and helping to spread it.

He said that when many of the students returned to Grenada for the resumption of classes a few weeks ago, several of them could be seen all over the place in the south of the island mingling with locals and not even wearing masks as they visited several night spots that were open to the public.

He noted that although some of the students were vaccinated that in itself would not stop them from passing the virus to others on the island.

According to the official, he is confident that Minister Steele and the Acting CMO know better than to just single out the Jab Jab masqueraders in August for the spread of the deadly virus.

The Covid-19 team member did not totally agree with recent statements made by Antigua’s Prime Minister Gaston Brown that the failure of the police in Grenada to clamp down on the Jabs might have helped with the rapid spread of the deadly virus.

“I heard him saying that – it might not have had that amount (of infected person) but it would have still had the upsurge,” he said.

On August 5, the number of Covid-19 cases in Grenada stood at 172 and seven weeks later it skyrocketed to over 5, 000 with close to 140 persons perishing from the deadly disease.