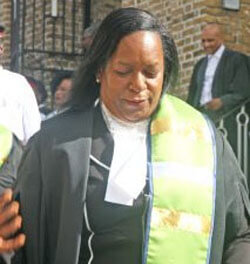 Retired nurse Corine Clara has lost a major court case and has to repay a huge sum of money to the estate of an elderly lady who had appointed her as a guardian.

It is clear from the ruling that Justice Actie had reservations about the evidence given to the court by the retired nurse on the spending of the money.

The judge said: “During the trial, I paid particular attention to Corine Clara’s demeanour. My assessment of the witness was that she was untruthful and evasive to the questions asked during cross examination.

When asked “what she do with the money withdrawn”. She sheepishly responded “I did stuff” but did not lead a shred of evidence to indicate what she did with the funds withdrawn from the accounts.

Corine’s assertion that Mable (the elderly lady) gave her the money for her own use and to do as she pleased is not supported by the evidence. The widow’s pension appeared to have been Mable’s only source of income. It would be inconsistent for Mable to have given Corine the money for her own use when the same money was required to pay for Mable’s stay at the home along with her medical and funeral expenses”.

The high court judge ordered the retired nurse to repay over EC$300, 000.00 within a one-month period and to give an account for the spending of the money from the bank account.

Following is the continuation of an edited version of Justice Actie’s ruling on the matter:

The Privy Council is subject to a proviso which enables the local courts to make enquiries as to the true intention of the parties based on the circumstances of the case.

The local courts, being more familiar and well versed with the island’s customs, are best placed to determine the issues from a more traditional standpoint.

It is commonplace in small jurisdictions like Grenada for elderly vulnerable/illiterate persons to open accounts with cosignatories for convenience and to assist in the management of their financial affairs and day to day living. The situation in this case is no different.

Ms. Hannibal, in her filed submissions, asserts that Corine Clara was added to the account as a matter of convenience to handle the affairs of Mable Phillips, who was advanced in age and physically feeble.

She states that it was never the intention that Corrine would have had a beneficial share in the proceeds of the bank account for her own use during Mabel’s lifetime. The true intended purpose was to pay the St Martin’s home for the aged where Mable resided, with the only other authorized expenditure being small amounts for toiletries, food, medical and other miscellaneous items.

Secondly, counsel contends that Mable did not receive any legal advice as to the nature and consequences of a joint account. The bank official did not lead any evidence that Mable was given further advice.

The court notes that the Whitlock v Moree case contained a note at the end of the form which reads: “I hereby declare that the information provided by me in this application is correct and complete to the best of my knowledge and that I have received, read, understood and accepted the agreement and the “Disclosure Documentation” and shall be bound by its terms.”. The opening account form in the case at bar did not contain a similar clause.

Documents negotiated and signed with the benefit of legal advice or carefully explained to the parties are given special primacy. However, the signing of the bank’s standard account opening form by an elderly and vulnerable primary account holder without independent advice to achieve full precision of the agreement cannot be disregarded in a small jurisdiction like Grenada.

Ms. Linda Evans, a Matron from the St. Martin’s home and a witness for the defendant, states that “Mable did not have money sense and did not know the actual value of money or understood the amount in her account”. This is in my view is someone who needed independent advice with the bank transaction.

There was no evidence that Mable obtained any legal or independent advice when she opened the bank account or in signing the form.

Certain features in the relationship and the events which led to the creation of the joint account are pertinent in deciding the true nature and intent of the account.

There are several factual issues which can assist in resolving this claim. First, Mable was an elderly, 85-year-old widow who was a returning national from the USA after the death of her husband. She did not have any blood relationship in Grenada.

From all accounts Mable had been previously defrauded by a confidant, Ruby Gilbert, a cosignatory on a joint account. Mable turned to the one other person whom she trusted, Corine Clara, a retired nurse, for assistance. Mable opened the joint account and also gave a power of attorney to Corine Clara to take care of all her affairs.

It is also necessary to consider the terms of the standard form document which are supplanted with contemporaneous notes and instructions given by the primary account holder.

I am of the view that the nature of the account in dispute is amplified in the contemporaneous documents. The manuscripts and testimony of the Bank employee endorsed on the opening form all indicate the intended purpose for which Mable opened the account.

The contemporaneous manuscripts enable the court to evaluate the evidence of the witnesses. During the trial, I paid particular attention to Corine Clara’s demeanour. My assessment of the witness was that she was untruthful and evasive to the questions asked during cross examination.

When asked “what she do with the money withdrawn”. She sheepishly responded “I did stuff” but did not lead a shred of evidence to indicate what she did with the funds withdrawn from the accounts.

Corine’s assertion that Mable gave her the money for her own use and to do as she pleased is not supported by the evidence.

The widow’s pension appeared to have been Mable’s only source of income. It would be inconsistent for Mable to have given Corine the money for her own use when the same money was required to pay for Mable’s stay at the home along with her medical and funeral expenses.

Ms. Hannibal contends that adding Corine to the account was for convenience of the payment of expenses for the claimant during her lifetime and for funeral expenses. Corine Clara was given sole access to the account with a balance standing at $157,800.76.

Corine made large withdrawals between July 2007 and March 2013 totaling $202,067.26 including a onetime withdrawal of $100,000.00 on 15th May 2008. This amount was transferred to an account in Clara’s sole name. Corine continued to make large withdrawals from the account even after Mable was removed from the home and during the pending of the claim filed by Corine. It is the evidence that Clara only spent for small items such as toiletries and medication.

Conclusion
The court taking all the evidence in the round is of the view that claimant has proved her case on a balance of probabilities. Mable was vulnerable and relied on Corine for support. She gave her total control both on the account and through a Power of Attorney.

The next issue is should Corine Clara provide an account of her dealings with the account. Corine Clara at Paragraph 62 of her sworn witness statement said, “I say to this honorable court that any monies expended by me out of the funds of Mable Philip were used for the benefit of Mable Philip”.

It is necessary for Corine Clara to provide an account of all the monies withdrawn in which she alleges were used for Mable Phillips benefit.

In summary, the court declares that the joint account number …. opened with the now “Republic Bank of Grenada” with Mable Phillip and Corine Clara was an account for the convenience of Mable Phillps. Corine Clara is required to account for all the monies withdrawn from the account which were not used for the benefit of Mable Philips.

The claimant
avers that the court, not having had a hearing of the substantive action on the merits, had no jurisdiction to make such an order except by consent. The claimant contends that the order was drawn by counsel for the defendant and was not sent to claimant’s counsel for approval.

The defendants denied that the claim was never heard. The defendants contend that the order was an order of the court made after the judge, having examined the affidavit evidence of the parties, the social worker and Mable Philips in person, ruled that Mrs. Phillips was competent and able to travel. Counsel submits that parties both expressed their opinion that the matter be discontinued.

An order of the court is valid unless it is set aside, varied or appealed. CPR 42. 10 provides for the correction of order under what is commonly termed “The Slip Rule” CPR 2000 does not provide for the cancellation or recalling of orders.

The claimant alleges that the order should have reflected that it was made by consent. This is a simple correction permitted under “The Slip Rule” on an application to the judge. The claimant did not engage the rule.

The claimant’s claim for the recall or cancelation of an order is not permissible under the CPR 2000. The filing of a new claim seeking to cancel, recall or correct an order of the court on the grounds pleaded in the claim is tantamount to a collateral attack on the order.

This is an abuse of process not permitted under CPR 2000. In the circumstances, the claim stands dismissed with costs.

Order
In summary, it is hereby ordered and directed as follows:

(1). It is declared that the joint account number … with the Republic Bank of Grenada and Mable Phillips and Corine Clara is an account for the convenience of Mable Phillips.

(2). Corine Clara shall provide the estate of Mable Phillips with an account of moneys withdrawn from the joint account number … with the Republic Bank of Grenada which were not applied for Mable Phillips benefit within thirty (30) days of today’s date.

(3). At the end of the accounting, Corine Clara shall pay the estate of Mable Phillips all moneys withdrawn from the account which were not put to Mable Phillips’ use and benefit within thirty (30) days of the report.

(6). Interest at the rate of 6% from the date of judgment until payment in full.