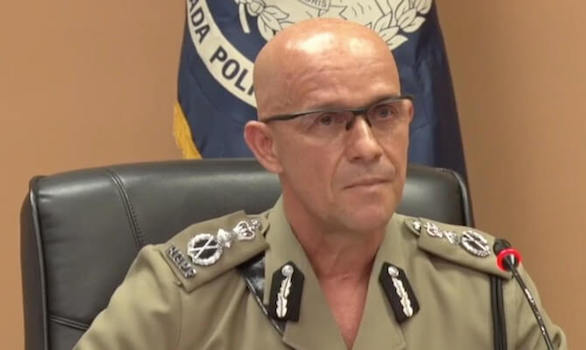 Commissioner of Police Edvin Martin has launched an investigation into reports that a Transmission Tower, costing in excess of EC$750,000, was imported into the country in 2017 with the Royal Grenada Police Force (RGPF) listed as the Consignee but not involved in the purchase of any such equipment.

The island’s chief cop made the disclosure after he received a letter from THE NEW TODAY seeking information about the controversial tower that is believed to be located at a place called “Piton” in the northern parish of St. Patrick.

“…I can confirm that a matter of such nature has been brought to my attention. I have had initial discussion with the parties mentioned and I have initiated an investigation to be able to get the facts clear on this matter,” he said.

According to Commissioner Martin, he was not the chief cop in 2017 when this happened and he hopes to get to the bottom of it as soon as possible.

“That is where it is at the moment – I am aware of the matter, it was brought to my attention. I have had some preliminary discussions and reports collected and I have initiated an investigation,” he remarked.

“So once the facts are clear then I would be able to speak more decisively as to where the issues are. It’s a matter that I personally have a vested interest in, in wanting to be clear on what the issues relating to this matter are,” he said.

There are reports that a senior police officer with known ties to the defeated New National Party (NNP) administration could be at the centre of the Transmission Tower issue.

A senior member of RGPF is quoted as saying that he had been made aware in recent days about a Transmission Tower which came into the island under the name of the Police Force about five years ago and that this is “too serious” a matter that should not be fully investigated given the names of the persons who are called in connection with it.

He said that a number of top cops in the force are sure that the island’s major security outfit did not purchase any Tower around that time.

“Who purchased the tower – nobody knows. Police didn’t pay for the tower, so who paid for the tower? You see, all these questions have to be asked.

“The police don’t own a Tower for sure (at Piton). So (name of police officer withheld) will have to say who is the owner of the tower? Why did the Tower come to Grenada on the police name?”

A police insider said that the Transmission Tower documents were obtained by another Superintendent who passed them onto Commissioner Martin who then handed them over to Deputy Commissioner of Police, Tafawa Pierre, the former head of the Financial Intelligence Unit (FIU).

Pierre is known to have strong ties with the defeated New National Party (NNP) regime, in which his wife, Emmalin Pierre, served as the Minister of Education.

“Why the tower come in under the police name? The tower is there and what I understand is that a number of agencies are utilising it – they have transmitters on the tower – so who are they paying for the use of the tower?”

A source with one of the island’s telecommunications providers questioned the rationale of RGPF bringing in a tower in 2017.

He said the National Telecommunications Regulatory Commission (NTRC) had passed legislation preventing telecoms companies from bringing in additional towers after 2000 due to their proliferation around the island and with health concerns especially over the leak of radiation into the atmosphere.

He spoke of all companies in possession of towers being given instructions to share their towers in light of a decision taken by the commission “that no more towers were to be imported and all existing towers had to be shared.”

The source pointed out that new entrants into the field were not allowed to bring in towers but to sign up to use existing towers owned by companies like Lime and Digicel.

“There was a law which said no more Towers were to be erected or brought into Grenada. So if a Tower came in then that in itself was a problem,” he added.

The private sector executive told THE NEW TODAY that if a Tower was indeed brought in under the name of RGPF in 2017 it probably was nothing but a “disguise under the Police for National Security purpose to bring in the tower.”

“That is quite possible,” he quipped.

Another top cop who commented on the Transmission Tower issue said he hoped that the new leadership in the Ministry of National Security would look into the matter with some degree of urgency.

“I want to believe that (name of High Command member) and them knew all about that. I wonder if this tower is not part of all the controversy where they bring in all of this electronic equipment, spying devices and so – because you know they need transmitters.”

“There are many questions needing answers – who authorised the procurement of the tower?  If the police do not own the tower, who does and why was it procured on the RGPF name as consignee? Who paid for the tower? Who paid the freight?”

“Is there a contract giving authority for all the communications companies to use the tower? Who do they pay for the use of the tower and how much? Who is paying to keep the tower active?”

When contacted by THE NEW TODAY, a spokesman for NTRC said there is no record on the books of this tower at Piton in the name of RGPF or any member of the Police Force.

He said that RGPF has no tower at Piton on record but owns the one which is set up at police headquarters on Fort George.

THE NEW TODAY has been able to ascertain from multiple sources that a Superintendent of Police did hire a private company to transport a tower to the Piton area a few years ago.

In July 2020, the then Health Minister Nickolas Steele denied that he was involved in any attempt to acquire Software to Hack Smartphones and Spy on Grenadians with a fugitive from justice in Germany, Jan Marsalek, Chief Operating Officer of Wirecard.

The fugitive executive of the embattled payment startup company was mentioned in the German weekly magazine, Der Spiegel, as trying to source the spying equipment for Grenada shortly after the 2013 general election in which Prime Minister Dr. Keith Mitchell returned to power.

The magazine reported that Marsalek, who is on the run, had a meeting with the Italian surveillance technology provider, Hacking Team in 2013 as an official representative of the government of Grenada to try and secure the spying technology.

Der Spiegel included in the article the printed letter with the controversial letterhead of the Grenada government which was purported to be signed by Steele who was then the Minister of Foreign Affairs.

When contacted by THE NEW TODAY back then, the senior government minister categorically denied any involvement or knowledge of the Marsalek dealings with Hacking Team on the software issue.

The ousted Keith Mitchell regime had been dogged by allegations of spying on citizens during its tenure in office.