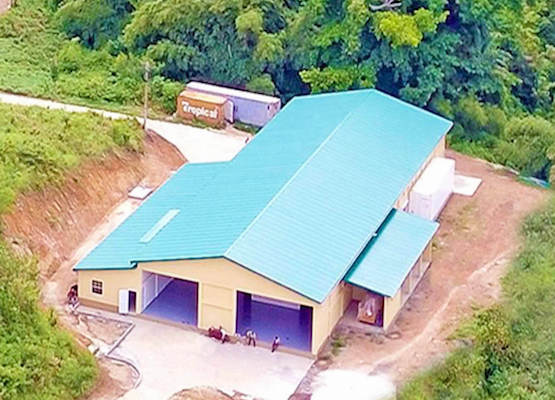 It was once being promoted as Grenada’s biggest poultry farm with the intention of helping to cut back on the massive importation of chicken into the island, but Excellent Farms Ltd has run into difficulties in less than two years and has been forced to close down its operations.

THE NEW TODAY understands that Ariza Credit Union, which pumped millions into the project, has virtually taken over the company which ceased operations in December and is now trying to restructure it for a relaunch in the near future.

The initial project was the brainchild of budding politician Phillip Telesford of the National Democratic Congress (NDC) and attracted financiers such as attorney-at-law, Dickon Mitchell who is the current leader of the party, as well as businessman Derek Steele, father of Health Minister Nicholas Steele and Osbert Hood, described as a wealthy Grenadian who made most of his money in New York in the United States.

According to a well-placed source, the project suffered mainly from the failure of the Keith Mitchell-led government in the Botanical Gardens to implement a critical component of its policy on poultry that calls for 40% of the market to be reserved for local producers as an incentive for the growth and development of the industry.

He said that Excellent Farms, located on a 50 acre plot of land on the L’Etage Estate in Mt. Rose, St. Patrick, had the capacity to satisfy 29% of the required 40% but the ruling New National Party (NNP) did not implement the policy on poultry for local producers in order to have a smooth transition.

“That was not done,” he told THE NEW TODAY and hinted that the island would have seen an increase in some chicken parts for local consumption.

The source also pointed a finger at Agriculture Minister Peter David who was the line minister when the farm started and accused him of being “ineffective” despite “all kinds of meetings” held between him and the persons involved in the project but it boiled down in the end to nothing but “ole talk”.

He said that subsequent meetings were then held with the Minister of Trade, Alvin DaBreo who gave the appearance of being more proactive than Minister David in getting Excellent Farms to get-off the ground fully through its over EC$7 million investment.

He felt that with general elections now pending, the Mitchell-led government has seemingly taken the position that it can ill afford for there to be any increase in chicken price on the island for local consumers and it is now placed on the back-burner.

THE NEW TODAY was also told that most of the initial investors have since pulled out of the project against the backdrop of its growing financial difficulties.

The source said that Ariza, which pumped money into the business, has gotten involved to protect its interest and has set up a committee to look at the situation.

He pointed out that before its forced closure, Excellent Farms was trying to introduce new products onto the local market that was already “saturated” because the other competitors were “doing their work good – making sure it doesn’t have any shortages” of their products.

He doubted that the government would implement the 40% policy for local producers until after the upcoming general election in order to give the project a new lifeline in the shortest possible time.

He described the project as “an excellent one for Grenada” in light of the fact that the island spends about EC$40 million annually on imported poultry products.

“We have the capacity to be self-sufficient, which we need to do,” he said.

The source noted that those countries in the Caribbean which have done well with their poultry industry like Trinidad, Barbados, St Lucia and Jamaica did so with the support of a clearly defined policy from their respective governments.

He said in the absence of an effective policy it is extremely difficult to “compete with those chicken like neck and parts that are being dumped in the Third World.”

The Ariza loan to restart the business was secured by Telesford but the credit union has control of the new Board of Directors to take controlling interest as part of the restructuring exercise that is currently underway.

There are reports that Grenadians consume approximately 16 million pounds of chicken on the island every year.

Excellent Farms was expected to have the capacity to house 50, 000 birds.