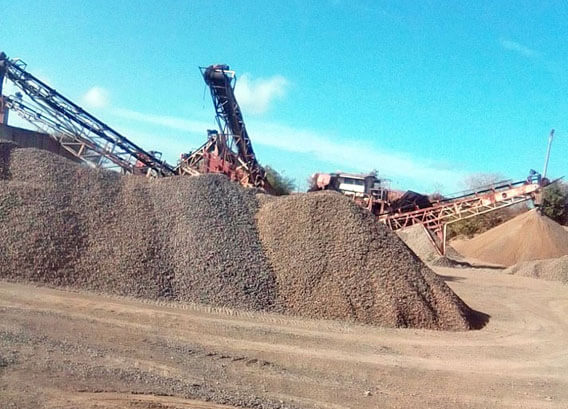 The Mt. Hartman Quarry – the last major stone quarry belonging to the Government and People of Grenada

Investors from China are currently involved in two major development projects on the island – Levera in the north and Mt. Hartman in the south.

THE NEW TODAY understands that the Chinese investor in the south is looking to consolidate his growing influence with a plan to acquire the prized Mt. Hartman Quarry which is crucial to his nearby billion dollar investment project.

“That is pure facts – that is what they want to do. Could you imagine that we one last little stone asset … the Chinese are going to own in Grenada,” said a source close to the issue.

“The Chinese come to do a little business (and) they have to go with (our) quarry too? That is in the same category as Camerhogne Park – this time they can’t get away,” he added.

Reference to Camerhogne Park was the effort made by Egyptian businessman Naguib Sawiris to gain control of a public park near to the world famous Grand Anse beach that has been set aside for use by locals.

The new Chinese investors at Mt. Hartman are involved in a project called The Hartman Resort Grenada – a US$2.9 billion investment over the next decade.

The foreigners from the Far-east are taking over the area from another controversial Chinese businessman, Charles Liu who ran into problems with the U.S Securities and Exchange Commission (SEC) over fraud allegations.

The Commission has charged Liu and his wife Xin Wang of being involved in a scheme to defraud Chinese investors in the U.S Federal “EB-5 Immigrant Investor Program,” which is administered by the United States Citizenship and Immigration Service (USCIS).

According to the case filed in a U.S court, the defendants have defrauded at least 50 Chinese investors of almost $27 million by falsely claiming that their monies would be invested in a program that met the requirements of the EB-5 program, and would be used to build and operate a proton therapy cancer treatment center in Southern California.

Authoritative sources told THE NEW TODAY that the new Chinese investors have the Mt. Hartman Quarry in their sight and are desperate to complete a buy-out of this prized national asset with government.

The ruling New National Party (NNP) administration of Prime Minister Dr. Keith Mitchell has not responded to inquiries made by THE NEW TODAY on reports that it had entered into an arrangement with the Chinese company to take over the quarry.

On Tuesday, Philomena Robertson, the Press Secretary in the Office of the Prime Minister was approached for comment in light of information obtained that the Chinese are at an advanced stage in their discussions with government on the deal.

The following was sent to the Press Secretary: “We are hearing of an agreement between government and the Chinese for sale or lease of the Mt. Hartman quarry. If correct can we get particulars of this deal/arrangement with the Chinese? Much appreciated. Thanks.”

Up to the time of publication, there has been no response from the Office of the Prime Minister.

The line minister for the operations at the state-owned Mt. Hartman Quarry is the Number Two man in the regime, Works Minister Gregory Bowen.

A usually reliable source told this newspaper that a Chinese businessman based in Hong Kong is the major player in the new development at Mt. Hartman and is the principal figure behind the move to buy the quarry from government.

The quarry is currently run by a company involving businessman, Nelson Louison who over the years had been linked to the Kuwaiti-operated construction company known as CCC.

According to sources, the Louison outfit has a lease in their possession for the quarry and that the Chinese will first have to buy out the lease, believed to be running into millions of dollars in order to take control of it.

The Mt. Hartman Quarry was controlled by CCC for close to 25 years as it was engaged in several road construction projects on the island under the NNP regime.

CCC has seemingly pulled out of Grenada and in the past three months, the operations of the Mt. Hartman quarry fell into the hands of the Louison Group which had been supplying aggregates to government projects including a major road construction in St. Patrick.

The source pointed out that in recent days, the Chinese have cut a road from their nearby project to right behind the Mt. Hartman Quarry.

“They cut a road so they (Nelson Group) had to stop them. Despite they (the Chinese) get it (control of the quarry), they are not in charge of the quarry – they can’t supersede the lease. Until they pay they can’t do anything there,” he said.

A law firm close to the NNP regime is said to be in the process of doing up the legal paper works for the sale of the quarry.

According to the source, no documents for the sale of the quarry have been lodged in the Supreme Court Registry as the deal being worked out was “only at sale agreement stage.”

He said that the alleged sale of the Mt. Hartman Quarry to the Chinese outfit is not going down well in some quarters.

He stated that the Kuwaiti-controlled firm known as CCC was given only a lease for the quarry and was never allowed to buy this prized national asset and take full control of it.

There are reports that the Mt. Hartman Quarry has about 50 years before the resources are depleted.

THE NEW TODAY was told that a high-powered meeting was held last week at the Ministry of Works to close out on the deal with the Chinese for the Mt. Hartman Quarry.