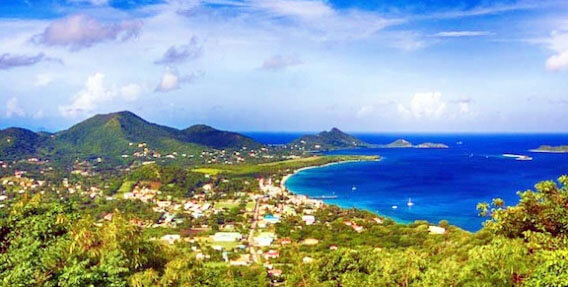 An aerial view of Carriacou, which is now being discussed in light of the Sex Molestation case involving a schoolteacher

He (is) always doing that. They should drown him in jail.

That was the comment made to THE NEW TODAY by a young female who identified herself as the cousin of a 55-year old schoolteacher on the sister isle of Carriacou who is currently under investigation as a pedophile.

The young lady was responding to an article which appeared last weekend in which a schoolteacher at a prominent secondary school on the sister isle was identified as one who had a string of sexual relationships with some of his female students.

According to the cousin, the children of the teacher are with women whom he taught at school.

She said that he often went after “younger women” especially those in their 20’s and is currently living with “a young girl”.

Another relative of the schoolteacher remarked, “I have a headache”, after getting confirmation that the individual was her own cousin.

The Royal Grenada Police Force (RGPF) and the Child Protection Authority (CPA) are said to be investigating child sexual abuse against the teacher covering more than two decades.

The investigation was launched after the parent of a female student at the school got the authorities involved when it was discovered that the teacher had been sending scores of sexually explicit messages sent to her on a message app.

THE NEW TODAY understands that police have taken away some electronic devices belonging to the teacher including a laptop and that his arrest is pending.

This comes as more details emerge of multiple incidents of sexual abuse and grooming allegedly committed by the teacher over the years.

There are reports that senior officials within the school district and law enforcement officers were informed about the situation as far back as 1997 but the allegations were never investigated or acted upon.

One of the reports linked the teacher with the pregnancy of a 13 year old girl who was forced to drop out of school in Form Two but when it was investigated no one was charged.

Another woman claimed that she was groomed and eventually raped by the teacher at the age of 14 and did report the matter to senior officials at the school and also the Ministry of Education in 2013.

Speaking with THE NEW TODAY, the woman said: “What I can say to you is that he (name of teacher) is a very dishonest individual, very deceptive and evil. He is a pedophile, takes advantage of young girls who are vulnerable. I once was in that category and was his victim.”

The alleged abuse took place while he was her teacher and went on for years into her adulthood.

“He was my Physics and Electronics teacher within the period 1996 to 1997 and even after he resigned he was still assisting us. He also had private classes at his home which many students attended.

According to the victim, when the matter was reported by her mother when she was a teenager, she did not cooperate because at the time she was unaware that she was the victim of a crime.

She said: “The matter was reported by my mother to Social Services. They came once but I was silent and they never came back. Plus it got really complicated and I remained in a relationship with him for years not fully understanding that a crime was committed against me. In Carriacou, it seems to be the norm or should I say Grenada”.

The teacher now under investigation reportedly resigned in 1997 but was rehired and brought back into the classroom in 2014.

Another concerned citizen on the island remarked, “there’s a track record of (teacher’s name) interfering with his students. He told me ‘if I am going down they (principal and other senior officials) are all going down’.

“He was removed from the classroom because of allegations and there are students who are willing to testify in the court. Other parents reported to the principal but no action was taken,” she said.

There are credible reports that concerned citizens did make a case to the school as to why the controversial teacher should not be allowed into the classroom but were ignored.

One resident said: “We went to the school with a whole file on the man to tell the principal they shouldn’t hire him and the next Monday he was back in the classroom. All the principal cares about is the Maths grades.”

There are also claims that the teacher has been saying recently that if he gets into trouble over the allegations then so will the school principal.

Several persons who are angry about the situation are now saying they take that to mean the principal was aware that abuse of students had been taking place.

In this latest incident, over six hundred printed pages of messages sent to the 15 year old student have been recovered, most related to her body.

The messages date back to April 2020 at the start of the COVID-19 lockdown.

The family have retained an attorney-at-law in order to ensure that the matter is investigated and the Minister of Education, Emmalin Pierre has been informed about the development through a letter.

THE NEW TODAY was given the names of half a dozen teenagers who allegedly received sexually explicit messages from the teacher and who had been sexually molested by him.

It also appears that other parents had reported directly to the school principal and the Vice Principal was also informed when another teacher discovered messages on a student’s phone.

“I can tell you that when I was to return to my work as teacher of (name of school withheld), I informed the principal (name of principal withheld) of my experience, which he claimed that he was not aware of. He stated that there was no evidence to make such a claim.

“I was very uncomfortable returning to work because of his presence on the job which I verbally reported to (name withheld) who was the CEO (Chief Education Officer) at that time in 2015.

“(Name withheld) indicated that no such record came to his office….not from the school or from Child Protection office although I did learn in my absence from school, there were complaints made about the gentleman regarding his inappropriate behaviour towards students.”

The teacher was contacted by THE NEW TODAY for comment on the allegations levelled against him and claimed that he was not aware of the issue.