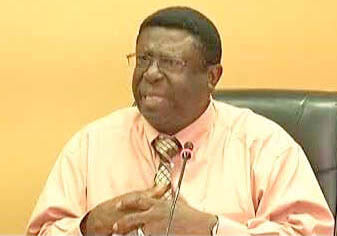 A high-ranking member of the Public Workers Union (PWU) has accused the ruling New National Party (NNP) administration of engaging in “institutionalised corruption” in the manner in which party executive member, Carlton “Darker” Frederick was placed as the so-called head of the Physical Planning Unit (PPU) within the Ministry of Finance.

He told THE NEW TODAY that the government has found a way to place Frederick, a retired public officer and political activist with the ruling party, to run the unit through the creation of an authority and putting him at the helm as the Chairman.

Frederick was ushered into the top chair at PPU after the Public Service Commission (PSC) launched an investigation into alleged wrongdoing against the head of the office, Fabian Purcell in connection with the failed multi-million Shrimp Farm project in Victoria, St. Mark.

Purcell who admitted receiving money from the operators of the Shrimp farm project without permission from the commission to do private work and not paying taxes to the State from the money received, has been found not guilty of the offence but was transferred to a position in the Ministry of Agriculture.

The PWU official accused government of “using the system” in a manner that even a law court might not be able to find fault with them on the Frederick matter.

He said it is clear that the regime in the Ministerial Complex in the Botanical Gardens has carefully studied the system and found a creative way to utilise the existing loopholes to place the party activist in the office.

According to the official, Frederick is not really functioning at PPU as the defacto boss under the rules of the PSC.

“These people know how to beat the system,” he remarked.

The PWU Executive member told THE NEW TODAY that there was really no need for government to send Frederick’s name to the commission for appointment to the top post since he “is not working as a public officer – he is Chairman of the Authority”.

He said that although the authority has been set up by government, it is not fully functional as yet “so he (Frederick) is more or less managing the authority” and not technically running the PPU.

He also alluded to the fact that the workers at PPU have not yet been moved over to the authority and as such are not mandated to take “any instructions” from Frederick as he is not their boss but the PSC.

“The workers – they don’t have to listen to him but he might ask them to do certain things and they might do it as if that is a favour so you can’t say they are taking instructions because they are not working with him – they are under the commission but he (Frederick) is under a statutory body,” he said.

“It’s institutionalised corruption”. They (government) know what they are doing and they are doing it in such a way that… if you go to court with it, you can’t win, he added”.

The PWU Executive member went on to say: “The whole thing (statutory body) set up already but I don’t think it is fully functional but that is what it is. As far as I see it, he (Frederick) is alone as of now because the staff has not been moved over and he has not been given a staff.

The official said that the union can do little or nothing about the Frederick matter since the State can put up a strong defense in a court battle that he “is not a public officer, he is operating a statutory body”.

THE NEW TODAY was told that the move to place PPU workers into the newly created statutory body could be long drawn out since negotiations will have to be conducted with PWU on severance payment among other entitlements for the employees as provided under PSC rules.

During the 1984-90 period in government, late Prime Minister Herbert Blaize asked all staff members of the PPU to resign their posts in the face of widespread allegations of corruption and wrong-doing but Frederick and Crofton Hannibal refused to heed the request as public officers.