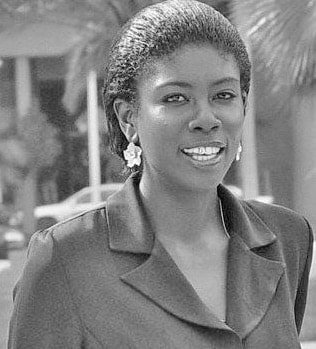 Journalist Calistra Farrier – ended up on the floor after the encounter

Information Minister in the Keith Mitchell Administration, Senator Winston Garraway has been accused of assault by a senior journalist in Grenada.

Calistra Farrier, who last year was attacked by political operatives of the ruling New National Party (NNP) made an official report to the Criminal Investigation Department, alleging that Information Minister, Senator Winston Garraway had assaulted her, resulting in her falling to the floor.

The incident occurred last Tuesday after the government’s weekly post-cabinet briefing at the Ministerial Complex in the Botanical Gardens while the journalist was attempting to get a response from Tourism Minister, Dr. Clarice Modeste-Curwen, regarding the chopping of a student at the secondary school in her constituency of St Mark.

Sen. Garraway who was standing nearby instructed the Minister not to answer the question although she had earlier agreed to the interview.

“Do not answer that question. That question should have been asked during the briefing,” Sen. Garraway instructed the senior minister.

Minister Modeste-Curwen responded to his instructions, seeking clarification on whether he was sure he did not wish her to respond to the reporter’s question.

“Are you sure you don’t want me to answer because I can,” said the senior minister to her junior colleague.

Farrier told THE NEW TODAY newspaper that the Tourism Minister appeared unsure about whether she should comply with Sen. Garraway’s order and began making her way towards the exit, followed by her.

Farrier said it was at this point that Sen. Garraway positioned himself between her and the minister, raised his arm and sought to move her out of the way.

According to Farrier, Sen. Garraway then allegedly used the force of his body, making contact with her and pushing her away from the Tourism Minister.

The journalist said she lost her balance and fell to the floor at which time Sen. Garraway began hurling insults as she fell to the ground and lay there.

The Junior government minister is captured on tape shouting at the journalist that she is a liar and a devil.

“I never touched you,” Sen. Garraway shouted as the journalist went down.

“You are a lair…I rebuke that evil spirit.”

Farrier said that when Sen. Garraway noticed that she continued to record the event even as she lay on the floor, he threatened repercussions should the captured audio be made public.

Sen. Garraway is a professed Christian and a Pastor in the Pentecostal denomination.

Pentecostal Pastor Oswald Mc Burnie, reacting to news of the incident said, “He cannot allow his Christianity to be compromised in service to a man”.

The incident with the journalist happened in the presence of Minister for Legal Affairs, Kindra Mathurine-Stewart, President of the Media Workers Association Shere-Ann Noel and at least one other executive member of the Association, other reporters and staff of the Government Information Service.

This is the second time in under two years that the journalist has been assaulted by people closely connected to the ruling party of Prime Minister Dr. Keith Mitchell.

During the last General Election campaign, two political operatives of the NNP, who are senior members of the party’s Town of St George’s branch physically attacked the journalist in the presence of witnesses, including people videotaping the incident.

Police prosecutors had dismissed the case when the journalist had been absent on one occasion and a lawsuit is being pursued by Farrier.

Farrier has been taking a constant battering from Dr. Mitchell’s Ministry of Information, with Press Secretary Philomena Robertson, engaging weekly in efforts to frustrate the journalist’s attempts to ask questions at government news briefings.

Last week, both Robertson and Health Minister Nickolas Steele tried to prevent the female journalist from asking a question to visiting U.S Ambassador to Barbados and the Eastern Caribbean, Linda Taglialatela on passports from Grenada being sold to nationals from Syria, Iran and Iraq – countries on the 2017 U.S official list as State sponsors of terrorism.