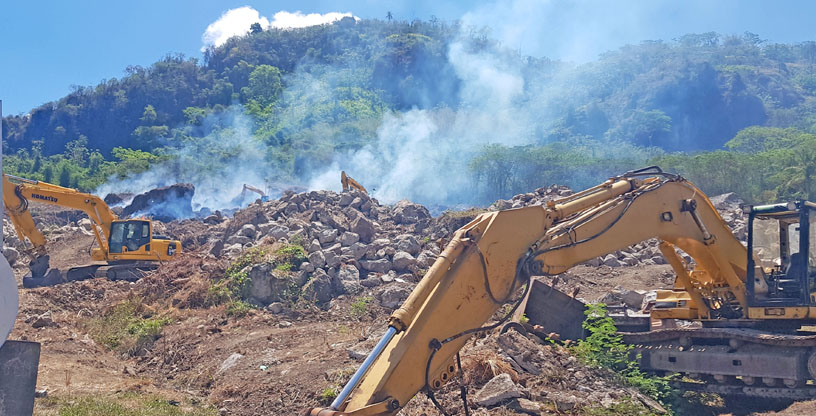 Opposition Leader Tobias Clement is seeking answers from the ruling New National Party (NNP) government on the continued burning that is taking place at the island’s sole dump site at Perseverance within the St. George North-west constituency of Prime Minister Dr. Keith Mitchell.

The elected Member of Parliament for St. George North-west had directed three questions on the issue to Minister of Health, Nickolas Steele at last week’s sitting of the House of Representative at Parliament Building at Mt. Wheldale, St. George.

He had submitted the following questions in the hope of getting answers – (a). How long has the Perseverance Dump Site been burning? (b). Was any action taken to extinguish the flames? And (c). Was an analysis done of the ambiance air quality in the area?

In an interview with THE NEW TODAY after the sitting, the Opposition Leader expressed alarm with the manner in which Minister Steele tried to brush aside the questions which were related to “a health issue” by informing him that it is an environmental matter that does not fall within his portfolio.

“Steele wants to slight it (burning at Perseverance) as if that is not his business (and) I shouldn’t ask him about the burning of Perseverance because he is the Minister of Health,” he said.

“…I asked it because it’s a health issue. Perseverance could burn if there was no health problem,” he remarked.

According to Clement, he believes that the Mitchell-led government “is attempting to cover it up” as if questions should not be asked by anyone about the existing problem at Perseverance.

“…For the last seven months, Perseverance has been burning – is like a fume when you pass through that place,” he told this newspaper.

“That is a national disaster,” he said, adding that nobody on the government side is prepared to talk about the burning of Perseverance Dump Site.

The Opposition Leader pointed out that the Dump site has been burning since the December/January period and is now posing serious health problems for people living in the area including the nearby villages.

Clement described the happenings at Perseverance as “a disaster” and the government needs to give answers to what is happening there.

Related:  Bleak Christmas for farmers with “bounced” cheques from MNIB

“It is still burning today – Perseverance is on fire,” he said.

The Opposition Leader feared that the toxic fumes from the burning are of health concerns to residents living in St. John, Brizan, Concord, Grand Roy, Beausejour and Happy Hill who have been breathing it into their systems for over half-a-year now.

He said: “When you pass through Perseverance not even mask (for coronavirus protection) helping you and you have people passing through there every day on their way to town, you have people working there.”

Clement pointed out that one person who passed through the area told him that the smell from the continued burning at Perseverance reminds him of the smell from the ruins of the Twin Tower in the 9/11 terrorist attack in New York.

The St. George North-east Member of Parliament said he can see the white bluish smoke coming from Perseverance early on mornings from his home at Mardigras which is some distance away, meandering and dancing its way along the west coast of the island through Happy Hill, Mt Moritz and as far away into Springs in St. George.

In addition, he said the smoke and fumes coming from the Dump site are so thick at times that persons venturing into the area frequently complain that they have problems with visibility in making their way out of the zone.

Clement said that a resident in St. John who was once a Member of Parliament indicated to him that there were thriving communities in Beausejour but in recent years people have moved out of the area due to the fumes.

“The long-term consequence of people on the west coast of Grenada because of the burning of Perseverance cannot be calculated,” he said.

The former MP also alleged that several persons in the area who have died of cancer in recent years with suspicion that it might be related to the thick smoke from constant burning at the dump site.