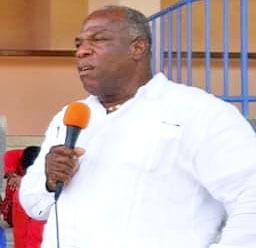 Nelson Louison – the main man at the Quarry

This is the question posed to THE NEW TODAY by a high-profile local professional who is linked to the outfit known as CCCCI that is engaged in a battle with the Chinese group, Hartman Resort which has just started work on a US$2.9 billion dollar resort investment project at Mt. Hartman.

CCCCI is now reportedly in charge of the Mt. Hartman Quarry, taking over its operations from the original CCC, a Kuwaiti-owned and operated company that was often used by government to carry out several road construction and repair work on the island.

The local operators of the quarry were forced to call the police for assistance after the Chinese encroached and illegally removed about eight tonnes of boulders from the site valued at approximately EC$750. 00.

The official who is associated with CCCCI accused the Chinese of wanting to gain control of the Quarry not for mining purposes but to use it as the entrance to their development project.

“The Chinese don’t want the quarry for quarrying – the Chinese want the Quarry for the entrance to their resort,” he said.

The official charged that the quarry is only 13 acres in size while the Keith Mitchell-led ruling New National Party (NNP) government has already given the Chinese over 260 acres of land at Mt. Hartman inclusive of Hog Island.

“…These Chinese have 274 acres of land including Hog Island, so what they come for now the whole of Grenada? What the government lease them is 274 acres – what more you are coming for?

“We are a small country – we are not Mainland China (in size) – leave us alone. You can’t want to come and want our own little quarry for the entrance to your development. This is the only functioning quarry in the whole of Grenada.

The official commented on a recent development at Mt. Hartman where the Chinese showed up at the entrance gate to the Quarry to conduct a survey since their property is in boundary with the Quarry.

“I could tell you for a fact the Chinese show up say they have to measure their land – just show up (two weeks ago) at the gate” he said.

According to the official, the main figure behind CCCCI, Nelson Louison was alerted by the Security Guard on duty about the presence of the Chinese to survey the place.

“The security guard called Nelson (Louison) who told him to tell those Chinese that Grenada has laws on the book about a notice period before you survey – you cannot survey without complying with the laws of Grenada.

“Like these Chinese gone over their rockers – they don’t realise that they come in a country with laws – they think they reach in Africa and everybody go just cow-tow to them.

The official pointed out that Louison has no intention of backing down from the Chinese and giving way to them at Mt. Hartman.

“He (Louison) will not back down for the simple reason that as he says – if you look at the history of these Chinese – what is the level of employment that they give? There are people working in that quarry from the time that the first CCC came in Grenada (about 25 years ago) – and what are you going to do with these guys? You know that the Chinese will just dispose of them.

The official indicated that the position of the CCCCI group is that the company is running the quarry and is currently working with the Mitchell-led government to provide material for several road projects around the island.

Last week, THE NEW TODAY quoted an official of CCCCI as challenging a claim made by local police that the controversy between both sides on the issue of the “stolen” boulders had been resolved since it was just “a misunderstanding between both parties”.

The official disputed the account given by the Royal Grenada Police force (RGPF) that “the issues are settled” and pointed to demands made by the operators of the quarry for payment from the Chinese for the boulders that were taken away.

He said: “Based on the information given to you, the police (are not speaking the truth). There has been no agreement (between) those people.”

“The police have aborted the investigation – they must have gotten orders from somebody. What the police give you – the information that they give you is not correct,” he added.

Hartman Resort is being undertaken as part of the Grenada passport-selling scheme known as Citizenship By Investment (CBI).

The Chinese investors have committed to carry out the project in four phases over the next 10 years with one of them being the building of a health and wellness centre that will cater to locals and visitors.

The Hartman Resort Grenada is also planning to construct a marina in the area.