A high court judge in St. George’s has delivered a bitter blow to American brothers Steve and Randall Oveson in their dispute with the principal figures behind the Levera Resort Development Limited (LRDL).

The Oveson, trading as the Grenada Citizen Development Limited (GCDL) have been displaced from building their multi-million dollar project in Levera after LRDL pulled the plug on them and sold the lands to a Chinese billionaire.

Levera Resort charged that GCDL did not live up to its financial obligations and was in default on its payment to them for the land.

The Oveson brothers have been trying to recover millions spent on the project as it had secured some of the funds from the sale of passports under Grenada’s controversial Citizenship By Investment (CBI) programme.   In a ruling handed down this month, high court judge, Justice Raulston Glasgow granted a request made by the Levera Group for GCDL to put down a certain sum of money as a guarantee for the matter to be heard.

LRDL insisted that the money should be set aside as the Oveson brothers have not paid court-sanctioned costs involved in other matters before the court.

As a public service, THE NEW TODAY brings an edited version of the Glasgow ruling on the matter: 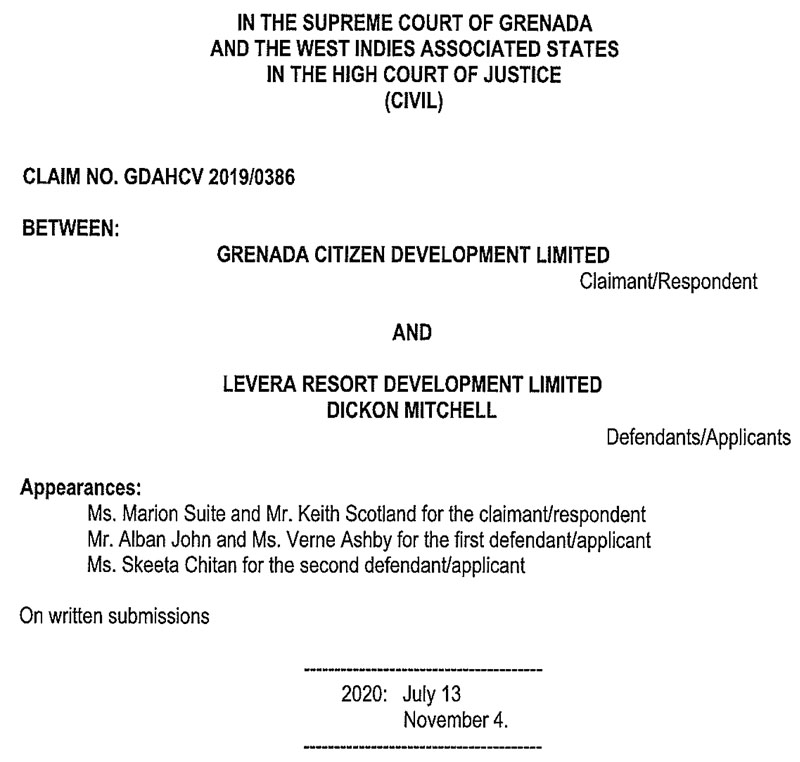 The applicants request that the court stays this claim until the security is paid or failing payment, that the claim is struck out forthwith with costs to the applicants.

The applicants have invoked the court’s jurisdiction to grant such orders pursuant to the Civil Procedure Rules (CPR) 24.2 and section 548 of the Companies Act, Cap. 58A of the Revised Laws of Grenada (the Act).

The grounds for the application are that:

(1) GCDL is a limited liability company formed pursuant to the Act;

(2)   The applicants have reason to believe that GCDL will be unable to pay the applicants’ costs if the applicants successfully defend this claim. The grounds explain that credible evidence exists that GCDL is insolvent because –

(a) GCDL is unable to pay its debts as and when they fall due and/or;

(b) GCDL’s liabilities exceed its net assets; and

(c) GCDL has little or no assets at all to satisfy any order for costs that the court may make in the applicants’ favour in the event that GCDL fails on its claim against them.

[2] The applicants further explain the basis for their application through an affidavit filed on even date by the 2nd applicant, Dickon Mitchell on their behalf (the Mitchell affidavit). In that affidavit, Mr. Mitchell gives a background to the present application that assisted me with the relevant facts.

[5] GCDL sought to appeal the order discharging the freezing order. The company filed a notice of interlocutory appeal on 15th October 2019. The notice of appeal was filed along with a record of appeal and written submissions;

[6]   The applicants filed written submissions and authorities in response to the notice of appeal on 31″ October 2019. However, GCDL did not prosecute the appeal. Rather, it withdrew the notice of appeal on 5th November 2019. The applicants state that to date they have incurred substantial costs to prosecute the above recited matters. They say that, as at the date of filing this security for costs application, GCDL has not paid them the costs of $1500.00 awarded to them on the discharge application.

[7] The Mitchell affidavit goes on to outline that it has come to the applicants’ attention that a request for enforcement of judgment by way of writ of execution has been filed on 19th November 2019 in Claim No. GOAHCV 2017/0053. GCOL is one of 3 entities against whom the writ has been issued. The Mitchell affidavit states that the judgment in GOAHCV 2017/0053 against GCDL remains unpaid as at 20th January 2020, the date of the swearing of the affidavit.

[8] Mr. Mitchell further deposes that the applicants are aware of the presentation of a winding up petition filed against GCDL in claim No. GOAHCV 2019/0512. The judgment creditor in that claim asserts that GCDL owes a judgment debt of US$628,900 and that GCOL is unable to pay the same within the meaning of section 378 of the Companies Act. Mr. Mitchell explains that this information came to his knowledge via the court’s notice of hearings published for 30th January 2019. I observe that the court list attached to the Mitchell affidavit as “OM 2” is in respect of 30th January 2020 as opposed to 30th January 2019. I observe also that the winding up petition against GCDL is listed as GOAHCV2019/0521.

I will assume that the reference to the date and claim numbers are typographical errors since in all other respects the information at this paragraph on the affidavit in respect of the court’s listing of GOAHCV 2019/0521 is correctly recited. Additionally, the appropriate claim number is later recited at paragraph 17 of the Mitchell affidavit.

The Mitchell affidavit also exhibits a copy of the winding up petition in claim No. GDAHCV 2019/0521. The court’s attention is directed to the affidavit of Stephen Randall Oveson sworn on 28th November 2018 and attached to the request for winding up (the Oveson affidavit). Mr. Oveson is a director of GCDL. Mr. Oveson signed the certificates of truth in respect of the claim and amendment thereto filed in this claim. He was also the deponent to the application for a freezing order filed in this claim on behalf of GCDL;

[11]   The court’s attention is further drawn to paragraphs 6,7 and 16 of the Oveson affidavit where Mr. Oveson deposes that:

“6. At present, the assets owned by the Third Named Defendants are:

i. Six (6) storage containers each estimated to be worth Two Thousand United States Dollars (US$2,000.00);

ii.Building materials at an estimated value of Five Thousand United States Dollars (US$5,000.00);

iii. One (1) container which is used as an office space and which together with the furnishings have an estimated value of Three Thousand United States Dollars (US$3,000.00)

iv.Construction tools and equipment at an estimated value of less than Ten Thousand United States dollars (US$10,000.00).

In the circumstances, the Third Named Defendant is unable to pay to the claimant in full the total amount now outstanding under the Mediation Agreement and has no assets which it can sell to obtain the amount.”

The applicants conclude that the material recited above and the failure to pay the costs of $1500.00 indicate that GCDL would be unable to pay any costs awarded to them in this claim. They ask that the court grant them the orders for security for costs that they seek.