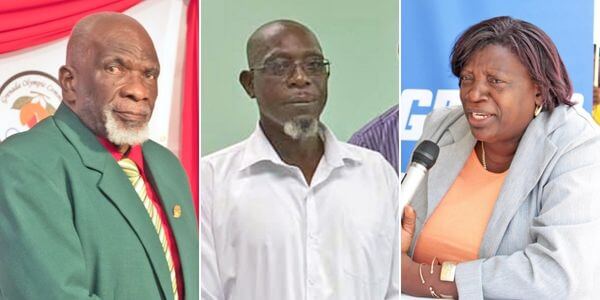 (L-R) Royston La Hee – did not seek re-election amidst the findings on the OS money spending; Ralph Lord – identified as the driving force behind the probe into the OS money issue; Veda Bruno-Victor is considered as the most dominant figure on the local Olympic Committee

That matter has not yet concluded.

Those were the words uttered by a senior executive member of the Grenada Olympic Committee (GOC) who commented on the estimated EC$440,000 in unaccounted money from Olympic Solidarity (OS) of the International Olympic Committee (IOC), for the development of sports in Grenada.

He told THE NEW TODAY that the GOC would have done what it was supposed to do through the Finance Committee and now awaits the final outcome from the international body.

“All of our dealings would have gone to the International Committee,” he said.

The GOC official declined to be specific on whether the local body was able to identify how all the funds were spent by the local body under the then presidency of Royston La Hee and general secretary, Veda Bruno-Victor.

He said: “What I can say is that the report from the then Finance Committee would have spoken clearly on what the findings were and if you go back the findings did not change – it is what it is.”

The official noted that no alterations were made to the report despite some concerns raised by Veda Bruno-Victor and past president Royston La Hee about its accuracy on several issues.

The report which was put together by an investigating body under then Deputy Chairman of the Finance Committee, Ralph Lord, elaborated on several instances of alleged abuse of the OS funding.

According to the GOC official, the report went to the Council, the highest body within the local body, for approval before it was sent to the IOC.

OS had written to the La Hee-led body to account for the money or repay it.

In the damning report, the Finance Committee pointed to the falsification of documentary evidence and inflated invoicing, as well as a conflict of interest in which Bruno-Victor was signing cheques and paying her husband, Martin Victor, a former policeman, for work done for GOC.

According to the report, Bruno-Victor had been sending two staff members in particular to make bank withdrawals of GOC funds and bringing it to her directly, and not leaving a paper trail behind on how the funds were spent.

In addition, the report made mention of discovering what it called “inflated invoicing” that were sent by GOC to the IOC auditors in order to try and justify the spending of the funds.

It identified the following:-