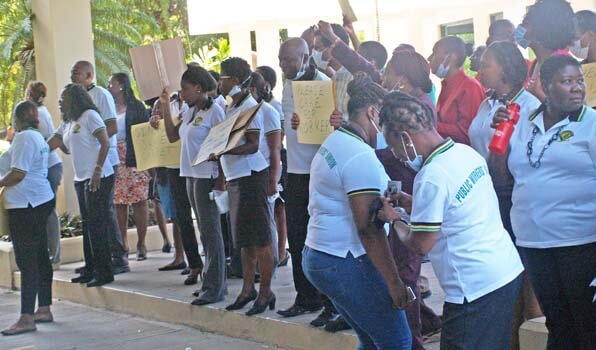 While some public servants did receive the first payment of the outstanding 4% salary, and wage increases owed to them since the end of January, the New National Party (NNP) administration of Prime Minister Keith Mitchell may have overlooked “various categories of contract workers,” when it sought to make good on its promise to begin paying the increases as of month-end.

In an exclusive interview with THE NEW TODAY on Monday, the President of the Public Workers Union (PWU), Brian Grimes confirmed reports that several GPWU members, employees on contracts did not get the highly anticipated increase in their August pay, a move he described as “a serious demoralising blow in a time when inflation and cost of living is at an all-time high in Grenada, Carriacou and Petite Martinique.”

Grimes said the PWU has received “numerous phone calls from persons who say they have not gotten the 4%,” including “a phone call from a Public Service Commission (PSC) contract worker, who said that they did not get the 4% increase,” alluding to the Union being engaged in the process of “collating information through our Shop Stewards, and our Secretariat” to determine the impact.

“What we are seeing here is a clear abrogation of duties in my view by the Government of Grenada for social justice, and economic justice to take place in the public service… because as far as we are concerned everybody in our bargaining unit was supposed to get (the 4%)”.

So, I want to be responsible at this time, and not say that it was deliberately done…but what we know is a lot of our workers have been disenfranchised, and we cannot stay silent on the issue, we must seek economic justice on their behalf.

“I don’t want to jump to conclusions because as I am speaking here now a letter is being sent out to the Department of Public Administration (DPA) regarding this issue. So, hopefully, we trust that it is simply a clerical error and not a deliberate policy decision by government to disenfranchise and discriminate against contract workers, which would be a sort of economic apartheid within the public service and that’s not a good policy.

The DPA, formerly known as the Department of Personnel and Management Services (DPMS) and the Department of Human Resources (DHR) was established in 1986 to be the focal point for Public Service Reform activities.

According to the Government of Grenada’s website, the DPA, which is currently headed by Acting Permanent Secretary Rhonda Jones, a former Reform Management Officer, “seeks to build a high performing professional Public Service that is responsive to the evolving needs of its customers and facilitates sustainable development.”

According to Grimes, who had campaigned for GPWU leadership on the premise that he would seek to bring justice to contract workers, “there are many different types of contracts” including Permanent Secretary contracts, fixed term contracts (and) PSC contracts which came about due to the “hiring process within the public service, which has been corrupted by the political directorate.”

However, he pointed out that common among them all, is that they are all public servants who give service to the nation, and they all pay union dues.

“And that is the common denominator, and the common trend that is supposed to ensure that when their bargaining agent, the Public Workers Union, negotiates for them they get the requisite increases…,” he said.

“…As far as we are concerned, contract workers pay union dues, they are citizens who work in the public service, so, based on natural justice, and the fact that they are within our bargaining unit, they are supposed to get that 4%,” he added.

Citing what is perceived to be the genesis of the outstanding issue of contract work, the PWU boss noted that although the “Grenada Constitution speaks to the Public Service Commission as the sole body for hiring public officers,” over the years “for subsequent governments to gain some sort of political footing, in our opinion, they have utilised other ways of hiring public servants (ultra vires) outside the Public Service Commission.”

Grimes claimed that “the DPA is the other body that is doing the majority of hiring now” for employees in the public service and that the missing 4% increases for contract workers is a matter that “has to be investigated deeply.”

“Hopefully, we trust that we will bring redress to it, and the government would do the right thing, and make sure that all workers within our bargaining unit, including fixed-term contract workers, get that 4%.

“So, we have written to the Permanent Secretary in the DPA for clarity on why members of our bargaining unit have not received that 4%.”

Grimes told THE NEW TODAY that the leader of the Government Negotiating Team (GNT), Foreign Minister Oliver Joseph admitted in a recent television programme that “this increase of the 4% is for all public sector workers and all public sector retirees.”

The PWU boss also made some passing remarks on the unresolved issue of the outstanding retroactive increases cumulatively owed to public servants from January to July of this year, amounting to EC$8.4m, which the Mitchell-led regime previously indicated it was unable to pay but was desirous of paying in bonds which the public sector unions turned down the offer.

Grimes reiterated the union’s position on the issue, and expressed the view that government was “out of order” to ask the unions to cash in on government bonds.

“…The Union is not prepared to go out there hunting down institutions to turn government bonds into cash, that is not under our purview to do such, it is the government’s purview to do such and frankly they are out of order to ask the unions to do that.

According to Grimes “collectively the Grenada Technical and Allied Workers Union (GTAWU), the PWU, and the Grenada Union of Teachers (GUT) have a categorical stance on this matter (and) hopefully this matter can be solved on the governments end.”

“They (the government) have to do what they have to do…said Grimes, who alluded to the understanding that “from now on, the 4% salary increase would be reflected each month.

“What we can say is that contract workers have been faced with immoral, and illegal actions over the years on the part of that employer because under section 29 (5) of the 1999 Employment Act, it speaks to when you have work of a lasting basis that person shall be deemed to be a permanent worker.

“What we have here is a culture, and a policy decision on the part of the powers-that-be, where they are constantly issuing short-term, fixed term contracts to people over an extended period, even up to 20 years.

“A government must seek to empower the citizens of the country, and certainly contract work, and these forms of contracts that is becoming more and more debilitating is not good for our workers, our economy, and this country.”