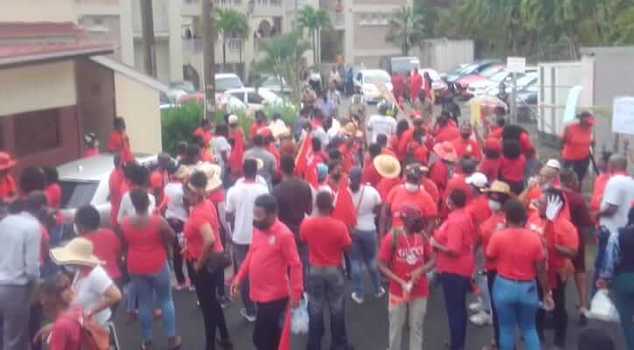 An estimated 200 teachers showed up for what was billed as “The Mother of All Marches” by the Grenada Union of Teachers (GUT) to pressure the Keith Mitchell-led government to honour its broken commitment to pay them a 4% salary increase in January.

The low-turnout would have been a disappointment for the union which a month ago elected a new executive into office with Jude Bartholomew replacing Marvin Andall as the new President.

It was not a normal working day for teachers as schools are closed for the Easter holiday period.

The teachers staged their protest action against the backdrop of a statement made by Commissioner of Police, Edvin Martin that the Royal Grenada Police Force (RGPF) would move swiftly and decisively against anyone who did not adhere to Social Distancing protocol as introduced by government in the fight against Covid-19.

The teachers assembled at the football section of the National stadium just after 10.00 a.m. with drums in order to march through the streets of the city.

THE NEW TODAY saw a party of about seven police officers headed by the officer in charge of the Traffic Department, Superintendent of Police, Randy Connaught guiding them along the route into town.

Several of the teachers had placards in hand which depicted their annoyance with the failure of the ruling New National Party (NNP) administration to keep its promise on the 4% issue.

The protestors were seen walking in single file as they left the stadium and travelled along Melville Street into the city.

The teachers attempted to march onto the Financial Complex on the Carenage where the Ministry of Finance and Treasury are located but were prevented from doing so by Supt. Connaught and a party of police officers.

As most of the protestors were assembled in the area of Sendall tunnel, vehicular traffic had to be diverted to other routes to get into the heart of the city.

Rain started to fall as the marchers staged their protest action.

Several members of the newly installed leadership of the Public Workers Union (PWU) including its new President, Brian Grimes were part of the 200-strong marchers.

The other major public sector union on the island, the Technical & Allied Workers Union (TAWU) was engaged in escalated industrial action in the south of the island where workers of the now defunct RBTT bank are engaged in a battle for Severance payment with a new commercial bank from Antigua buying the majority shares of the previous owners from Trinidad & Tobago.

The Mitchell government has told teachers and other public officers that it cannot pay the 4% increase at this point in time due to a significant drop in revenue collection as a result of the impact the coronavirus pandemic has had on the local economy.

Nevertheless, the government has found the finances in the region of $1 million per month to keep the Maurice Bishop International Airport (MBIA) afloat.