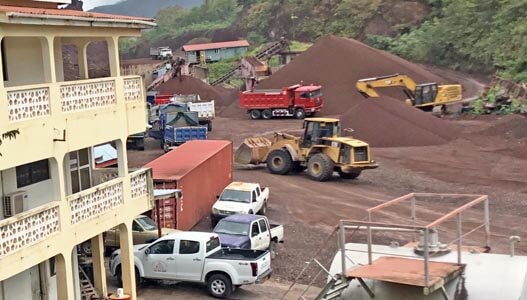 Prime Minister Dickon Mitchell has stepped in following reports of questionable dealings by some members of the new Board of Directors of the state-owned Gravel Concrete & Emulsion Production Corporation.

The issue surrounds a contract of $EC$32,000.00 awarded to a company owned by a current member of the board to purchase furniture like desks, filing cabinets, chairs, and coffee tables for the corporation.

There are reports that documents lodged at the main office of Gravel & Concrete show that the company of the Board member is the only one that had submitted price quotations for the items.

When contacted for comment on the issue, Chairman of the Board of Directors, Sylvester Quarless named two other firms in St George’s that were contacted for price quotations on the items.

He said that all three price quotations were considered and submitted to the Procurement Unit of the state body with the decision taken to purchase from the Board member whose bid was the lowest.

However, when contact was made with one of the firms identified by the Board Chairman, the management told THE NEW TODAY that they did not receive any such request from Gravel & Concrete to submit any bid for the items that were being sought.

A member of the management said that his company has had no dealings for years with the state enterprise.

According to one government insider, Prime Minister Dickon Mitchell was made aware of the issue by two Cabinet ministers who were informed of the development by an employee of the corporation and another person.

He said the Prime Minister called in the Board Chairman and the Director who owns the company over the weekend and spoke to them sternly about the transaction.

The deal has apparently been put on hold by Gravel & Concrete with no funds being expended although the Board member was said to be asking for 50% of the money upfront in order to supply the items.

The Gravel and Concrete situation was reportedly discussed in Cabinet on Monday.

Workers at the corporation have reached out to Prime Minister Dickon Mitchell for a meeting since neither the new Board or the Line Minster, Infrastructure Development Minister Dennis Cornwall have met with them since the change of government on June 23, 2022 to outline the new plans for the state body.

A well-placed official at Gravel & Concrete is insisting that only the bidding document from the company owned by the Board member had been submitted to them.

A senior employee who is no longer with Gravel & Concrete said he was aware of plans to purchase items from this particular company.

“I know we were trying to get some cabinets and neither Bryden nor Hubbards had. So I believe the new Secretary said Cathwills will provide it since they had a shipment coming in. I am not aware of $32,000.00 though. It was 3 filing cabinets and they were all less than $10,000.

“We did not receive a quote from other suppliers because they were not in stock at the time. Not sure if they purchased any other item since (I) have been out.”

Documents seen by THE NEW TODAY indicate that the list of items were increased over the weeks and the bid submitted by the company of the Board member was approximately EC$32, 000.00.

The controversial Board member is known to have fallen out of grace with the previous Congress government of Prime Minister Tillman Thomas after he failed to deliver on a contract to help with acquiring supplies for the Free School Book programme in the 2008-13 period.

The insider at Gravel and Concrete who described as “a big lie” claims made by a certain section of the board about the bidding process involving two other local companies indicated that it was only on Wednesday that instructions were given to the Procurement Unit “to get a quote from Hubbard’s and Bryden & Minors” on purchasing the items.

During the rule of the last New National Party (NNP) government of defeated Prime Minister Dr. Keith Mitchell, Gravel & Concrete was one of several state bodies that were identified by an arm of the World Bank for privatisation.

The World Bank outfit said that the corporation was costing the state too much money in subsidies and that it was heavily over-staffed.