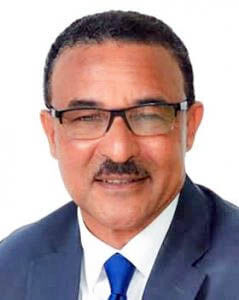 A former Public Relations Officer (PRO) of the ruling New National Party (NNP) has declared his intention to defy an order from Grenada’s Physical Planning Unit to stop the construction of a building in Calliste, St George’s.

Terry Forrester told reporters Monday that he will not stop the work on the wooden structure because of what he views as unequal application of the laws under the Physical Planning Act of Grenada.

Forrester admitted that he is in violation of the regulations on how far from the main road construction can take place – his structure is 24 feet from the centre line – but he says there are many other construction projects in the area that are more severely in breach.

Under the regulations, construction must be 65 feet from the road’s centre line.

“I feel victimised in this matter and when I look around at the violations I see, in concrete, it deeply troubles me,” Forrester said during a press conference which was held close to the site of his office expansion project.

Forrester pointed to the completed Silver Sands Resort which drew public protest over the violation of the 55 metres mean High Water Mark and the Kimpton Kawana Bay Resort, a US$188m project, which is now under construction as two of the worst violators of Physical Planning and Coastal Development Regulations.

Both developments received permission from the Physical Planning Unit, now headed by Carlton Frederick, an executive member of the ruling party.

Forrester also threw out the allegations of bribery and corruption that have plagued PPU, which was the subject of an independent commission conducted by former Accountant General Richard Duncan and attorney-at-law Cajeton Hood who was in the public service at the time.

More than a quarter century after that inquiry, the department is still plagued by the spectre of corruption.

A few months ago, Head of the Unit, Fabian Purcell was embroiled in an alleged act of corruption for receiving money from the operators of the failed Shrimp Farm project in St. Mark.

Purcell admitted to THE NEW TODAY that he did collect money and did not have any permission from the Public Service Commissioner (PSC) to engage in the work for the Shrimp Farm.

Forrester, who left the NNP under unfriendly circumstances and is now a member of the opposition National Democratic Congress (NDC), has also challenged Prime Minister Dr. Keith Mitchell to launch a criminal investigation into the dealings of PPU with the aim of rooting out what he said is the practice of receiving “handsome bribes” to push through illegal projects.

“It is alleged that a lot of bribery is taking (place at the Physical Planning Unit),” he said.

The businessman and political activist also claims to have information that a building on the Grand Anse main road appears to be in violation of the Code requiring construction to be 30 feet from the centre line.

According to Head of the Physical Planning Unit, Carlton Frederick that particular building does not have its entrance on the Grand Anse main road but instead the main entrance is located on a bi-road.

Frederick said he was unable to comment on the Kimpton Kawana Bay and other development projects mentioned by Forrester since approval was granted by the unit before he took up his post earlier this year.

In an interview in August 2019, Economic Ambassador Warren Newfield said they would take care not to encroach on the legal limit for structures being built on the beach and that they had made some changes to the design of the property and the pool.

But according to Forrester, his measurements indicate that a wall built on the beach front is in violation.

Responding to Forrester’s corruption allegation, Frederick, who was part of the Physical Planning Unit when the entire staff was asked to resign at the conclusion of the Commission of Inquiry which found systematic corruption, said he has made a declaration of assets in June to the Integrity Commission.

The Commission of Inquiry in PPU recommended the resignations with the understanding that they would no longer be eligible to hold public office, especially of the same or similar nature.

However, Frederick was brought back by Prime Minister Mitchell about eight months ago to head the Unit and oversee its transition to a Physical Planning Authority.

Frederick said if Forrester does not comply with the enforcement order which demands that he stops construction and submits his plans and request for permission to build within 28 days of the notice, a stop order will be issued.

If the construction continues Frederick said the matter would be referred to the Ministry of Legal Affairs for Court action.

He said Forrester did not apply for permission to build and that this is the second time he has attempted to build illegally, the first ending with a Court judgement against him.

The law provides for fines and demolition orders or all or part of any structure which a Court determines is an illegal construction.

Forrester can also challenge the enforcement order in Court but the Act requires him to cease building while the matter is heard.

During Monday’s news conference Forrester said foreign developers are being given free rein to violate physical planning laws, citing the Six Sense Resort and the Levera Resort where sensitive mangrove have been destroyed and natural habitats disturbed to make way for hotel construction.

“I am not a racist but I call for a level playing field,” Forrester said.

He said a message is being sent that, “It is ok to break the law if a certain prime minister is in power”.

At a meeting recently with staff of the Unit, which is currently transitioning to the Physical Planning Authority, the Prime Minister raised the issue of corruption within the organisation saying that, “we must also move quickly to change the historic perception that there is corruption in Grenada’s physical planning process.

“We must have suitably qualified persons to undertake the work and they must operate within the ambit of the law and must be held accountable for their actions.”

“I am very concerned about the level of ad hoc and arbitrary building that is becoming prevalent across the country,” he said.