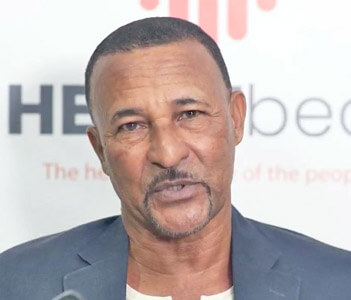 Former Executive member of the New National Party (NNP), Terrence Forrester is giving full support to new Prime Minister Dickon Mitchell and his plans to study legislation now in discussions in neighbouring St Lucia for only a high court judge to look at some issues with legal implications.

Speaking to THE NEW TODAY, Forrester who is now aligned to the ruling National Democratic Congress (NDC) administration wants to see PM Dickon Mitchell follow through on his stated intent to “get a private, independent judge” to adjudicate over certain matters.

He made the comment against the backdrop of a revelation from the new Grenadian leader that discovered a diplomatic passport selling scheme in which a Polish national had paid for a passport but US$140, 000.00 did not reach the Treasury but was diverted to the NNP South St George Constituency.

Forrester urged PM Dickon Mitchell to move quickly towards laying his hands on the St Lucia legislation which seeks to provide for a single judge in sitting to adjudicate over discrepancies.

“I think that is the way to go – he shouldn’t bog down himself personally with it but put a proper team in place and wherever the chips fall then so be it,” he said.

Forrester described the discovery of the illegal sale of a diplomatic passport by the former Keith Mitchell-led regime as “just the beginning – that is just the tip of the iceberg as far as I believe.”

He stated that an investigation should also be carried out about a controversial trip made to Hong Kong several years ago by Grenada’s former Tourism Minister Alexandra Otway-Noel.

He said that former PM Keith Mitchell “has been very, very skillful” over the years in many dealings and has been able to “dodge the bullet” when it comes to questionable dealings.

He cited the case of the millions that a company known as CJ’s and formed by a former secretary to the defeated Prime Minister, as a service provider to fifteen Parliamentary offices under the last government.

Forrester was also asked to state his feelings in light of new information that surfaced about the June 2022 sale of a diplomatic passport in light of the role he played about 15 years ago as the leading spokesman on the issue of the US$500, 000.00 briefcase scandal linking Keith Mitchell to the sale of a diplomatic passport in St Moritz, Switzerland to convicted fraudster Eric Resteiner.

“Am still waiting on the briefcase debacle because one day it is going to come forward,” he said.

According to Forrester, under the lifting of the statute of limitation, the government of Grenada should request from the U.S State Department all documents in their possession pertaining to the briefcase issue involving ex-PM Keith Mitchell.

“I made that very clear publicly. Of course to date no evidence has been presented but in light of what we heard last night (anything is possible)”.

Forrester suggested that those in the former regime who are now being implicated in the missing US$140, 000.00 passport deal involving the Polish national, which did not end up in the Treasury should find the money to give back to the individual who is demanding a return of his money after he did not get the prized national asset.

He also commented on claims made by Prime Minister Dickon Mitchell that he had in his possession the Cabinet Conclusion passed by the former administration which outlined the deal that was struck with the Polish citizen.

“To have a Cabinet Conclusion on the matter (sale of the Diplomatic Passport) is solid evidence that the Cabinet was involved in the sale of Diplomatic passports,” Forrester said.

“What other evidence do you want? This is a matter where all of them have been implicated – every single one of them have aided and abetted in this (illegal sale of a passport),” he added.