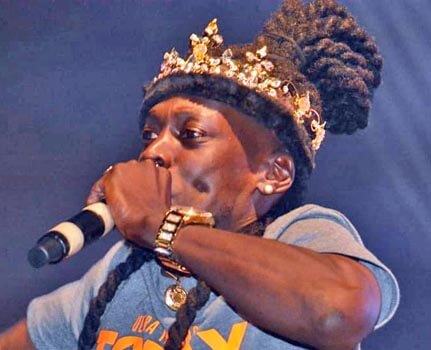 Consistency, determination, and hard work have finally paid off this year for Shem ‘Terror D Governor’ Bernard, who was last Friday night, crowned the national Power Soca Monarch for a second time, after outperforming the other 10 soca acts in this year’s competition on 262 points, with a captivating performance of his hit song, “Ultra Instinct.”

The last time ‘Terror D Governor’ won the coveted title was in 2011 when he dethroned the 2010 Power Soca Monarch ‘Otis Celestine’ with a song called “Last Days.”

This year’s win is a significant one for the entertainer, formerly known as “Terror Kid,” who in an interview leading up to the climax of the event explained that the song “Ultra Instinct” is “an evolve song”, which represents his transformation from “Terror Kid” to “Terror D Governor.”

Speaking with reporters after being crowned as the 2022 Power Soca King, he expressed gratitude to God for “life, health, strength, and patience,” which enabled him to continue making his contribution to the artform over the years.

“…I will keep doing it because music is a passion for me (and) I love music to my soul,” said Terror D Governor, who was happy for the opportunity to be back in competition on the big stage after two (2) years of no competition due to the pandemic.

“I am just happy to be here again to let the world see that – hey, I am great,” he told reporters, also acknowledging that “there is always room for improvement” and placed on record his willingness to put in the work in that regard.

Terror D Governor’s win comes on the heels of a decision of the 2019 Monarch, Jalon “Boyzie” Olive, to not defend the title this year if his public demands for the first place prize money to be increased to $100, 000.00.

“We are here today, and today I am the King,” Terror D Governor stated when asked to share his sentiments on the fact that although he won this year’s title, it was not done against the 2019 Monarch in competition.

Boyzie, who has captured the title on five (5) separate occasions, had used the social media platform to vent his concerns with the Spicemas Corporation (SMC) over prize monies being offered to artists, which he said have been significantly less than the investment they have been making to put on a stellar performance over the years.

The 5-times Monarch, who was on hand to congratulate the new Power Soca King, had chosen to limit his arguments to his social media post when contacted by THE NEW TODAY for an interview days before the climax of the 2022 event.

The Power Soca and Groovy Monarch competitions, which are traditionally held back to back on Fantastic Friday night, saw significantly reduced crowd support this year compared to previous years, when patrons would flock to the National Stadium to witness the rivalry between the artists.

It is the perception in some quarters that the absence of artists like; Boyzie, V’ghn, Dash, and the St. David’s duo- Lil Natty and Thunda from the competition this year, coupled with the controversial prize money saga, may have contributed to the poor turnout at this year’s events.

When probed on the prize money issue by THE NEW TODAY during an interview with reporters last week Thursday, SMC Chairman, Arley Gill, who had previously announced increases in the prize money for the 2022 Soca, Groovy and Calypso finals, affirmed that there is no issue with artists, and prize money.

“There is absolutely no issue. The prize money has been settled, and we have realigned as much as we can…nobody has ever approached the SMC showing interest in increasing the prize money,” Gill remarked.

The SMC boss also advanced the argument that “an artist always has a right to compete or not to compete” and that is not an issue for the national carnival body.

“Artists take decisions, and they follow their own path with regards to their career, and the SMC wishes each and every artist all the best in their career,” Gill said.

“…What you find happening is that when one (1) artist goes, another artist emerges (and) the music continues, (and) as the old saying goes; the culture is bigger than the man. When ‘Mr. Killa’ (Hollice Mapp) left and he did not compete, other artists rose, and I have no doubt that other artists will continue to rise. That’s just the nature of it,” the SMC Chairman added.

‘Lednek’ who placed in the top three (3) position this year with his selection “Mojab Combat,” on 251 points, later commented: “They (the fans) know I have good songs, and I can deliver but I never really made the top three (3) in Soca Monarch previously. So, I feel like I need to show them that I am capable of dominating.”