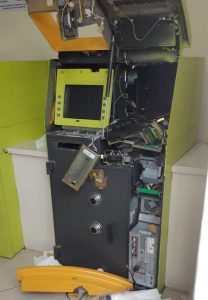 Police in Grenada are now investigating an attack on an ATM Machine in the city belonging to the Grenada Co-operative Bank Limited (GCBL).

A source close to the bank told THE NEW TODAY that it was very unlikely that the bandits were able to get any money from the machine located on Church Street, St. George.

The attack on the GCBL Teller came on a night when the entire country was supposed to be under lockdown as part of the State of Emergency enforced to battle the coronavirus situation in the country.

The source who spoke on condition that he was not identified said that the raid on the Teller was not done by “a professional” and has now raised concerns about the effectiveness of the Security Forces at the moment.

He said that the person clearly took some time to attack and damage the machine which is located in an area that is not too far from Police Headquarters on Fort George and the Criminal Investigation Department (CID) on Green Street.

“This person took some time to do all that damage, the police should be patrolling to protect business places. There are criminals who take advantage of the situation – it’s legal to wear a mask, so these things contribute. The streets are deserted, no real police presence,” he added.

GCBL is known to have cameras placed in strategic places around the ATM Teller.