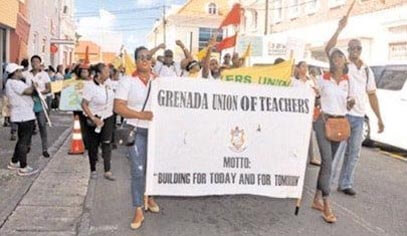 File photo of teachers carrying the GUT banner during a protest in St. George’s

Hundreds of school children were forced to go home early Friday as teachers in Grenada intensify their protest action against the Keith Mitchell-led government on the 4% salary increase issue.

THE NEW TODAY understands that a decision was taken since Thursday night by disgruntled teachers to call in sick on the last day of the work week as part of their strategy to bring pressure to bear on the ruling New National Party (NNP) government of Prime Minister Mitchell which reneged on a signed agreement to pay them the increase from the end of January.

One school principal indicated that most teachers showed up for work but several of them left the school compound early but at staggered times.

He said the plan is for some teachers to report to work early and others to come in late but to “leave when they want, adding that “They use their own discretion on what they want to do.”

According to the principal, some teachers might be on the job at 9.00 a.m. when school officially starts but will not be there around midday as part of their protest action.

Another school principal reportedly contacted the Ministry of Education to get instructions from officials there on what to do in light of the number of classrooms that had students but no teachers.

He later sent out the following message to parents: “Good morning parents, there are no classroom teachers at school so I am forced to dismiss the students before any injuries take place while the students are unsupervised. I regret having to do so but I had to after consulting with the Ministry of Education.”

One senior teacher at a primary school told THE NEW TODAY that his colleagues are annoyed over a threatening circular dated March 12 that was sent out by Acting Chief Education Officer (CEO) in the Ministry of Education, Angella Finlay giving a warning to teachers who she said was “walking off their respective jobs at various schools throughout the State without the expressed permission of principals or other relevant authorities.”

“Any teacher who fails to attend work beyond the number of days allowed for absence without an excuse, will be in breach of their Contract of Employment and the Education Act,” Finlay told teachers.

According to the school teacher, this circular from the CEO in the Ministry of Education will only serve to worsen an already bad situation between teachers and the Mitchell-led government.

She described the circular as pure “stupidness” and nothing but a clear attempt by the Ministry of Education to “intimidate” teachers.

“That note they sent (is) not making any sense whatsoever. When teachers see that even if they didn’t have plan to do things that will only trigger them off to do thing,” she remarked.

“The people in the Ministry that sending out these things and letting them in authority do that, if any success come out of it (the protest action) all of them getting it and they’re happy to get it,” she said.

One parent who was contacted confirmed that her son and other students were sent home early from school due to the absence of teachers.

“I don’t know how threatening teachers would help government after he (Prime Minister Mitchell) hire (former Tourism Minister) Alexandra (Otway). He (Dr. Mitchell) bowed to pressure from Bobby Steele (a political activist) to rehire Alex, so let’s see how he responds to teachers’ pressure,” she said.

This is obvious reference to the hiring of Otway as an Advisor to the Prime Minister at a time when government is claiming that due to a significant drop in revenue collection it cannot find the money at this stage to pay the salary increase due to teachers and other public officers.

Teachers are already at loggerheads with the government on its decision to dock their salaries following strike action taken just over 2 years ago on the restoration of Pension as provided for under the Grenada Constitution but was taken away by the 1979-83 left-leaning People’s Revolutionary Government (PRG) during the Grenada Revolution.

THE NEW TODAY cannot independently confirm reports that Education Minister Emmalin Pierre called an emergency meeting Friday with senior personnel in the ministry to discuss the new turn of events in the protest action being implemented by disgruntled teachers.