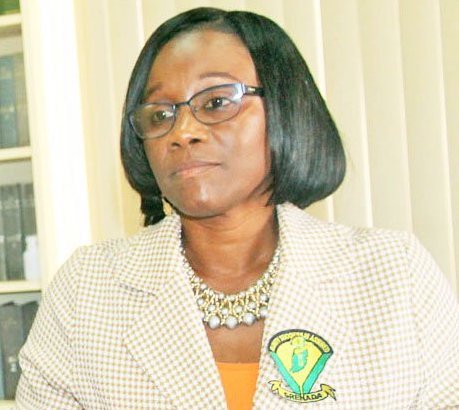 We got to do what we have to do to ensure that our members are paid…we don’t believe in giving ultimatums because our interest is in resolving the interest of the members. If ultimatums are given, then you don’t leave room for dialogue to be able to resolve the issue

Those were the words of President of the Public Workers Union (PWU) Rachel Roberts in an exclusive interview Wednesday with THE NEW TODAY regarding ongoing union-led industrial action by workers at the T. A. Marryshow Community College (TAMCC) surrounding unpaid increments dating back to six (6) years ago.

It has been over two (2) weeks since workers at the island’s primier tertiary institution led by the union started the protest in an effort to get the attention of those who are responsible to pay the outstanding sum of monies amounting to over $6.1 m due to them.

Without an amicable solution on the horizon, Roberts said the workers are standing firm in their demands and are prepared to do “everything possible” to ensure that they get paid.

“They have waited for too long…the workers have did their share, they did what they had to do to help the economic development of TAMCC”, she told the paper.

According to the PWU boss, the disgruntled workers have made the necessary sacrifices that they were asked to do and it is time to pay them their increments.

She said the workers did accede to requests “to defer increment payments” during the homegrown Structural Adjustment Programme (SAP) that was undertaken by the Keith Mitchell-led government after the 2013 general election to tackle a fiscal problem facing the country.

“We have done industrial action to get the attention of those who have to pay to get them to pay the workers.

“So how could we ask our membership to forego, take a haircut for 2015 after they have waited all these years and sacrificed for so long, actually giving TAMCC a no-pay interest free loan for six (6) years. TAMCC needs to honour its commitment to the workers.

“…We have not heard anything positive on that proposal”, she remarked.

Roberts went on: “The government said it is willing to pay for one year in 2020, so we told them (to) pay that one year in 2019 first, the monies owed to the workers for 2015 and we would be happy.

“We are reasonable people. We are people who want to see TAMCC develop and grow economically and socially because they (the workers) are interested in the well-being of the institution where they work.

According to Roberts, during a meeting with the members of the TAMCC College Council last week, Chairman Augustine Vesprey who presented a similar package on the table was advised to return with an acceptable proposal on the next occasion so that workers can return to work and TAMCC can be returned to a state of normalcy.

In an earlier interview with this newspaper, the PWU PRO, Daisy Hazzard had said that Vesprey committed to going back to the Mitchell-led government with the union’s request and was expected to provide a response to them on the outcome of his mission.