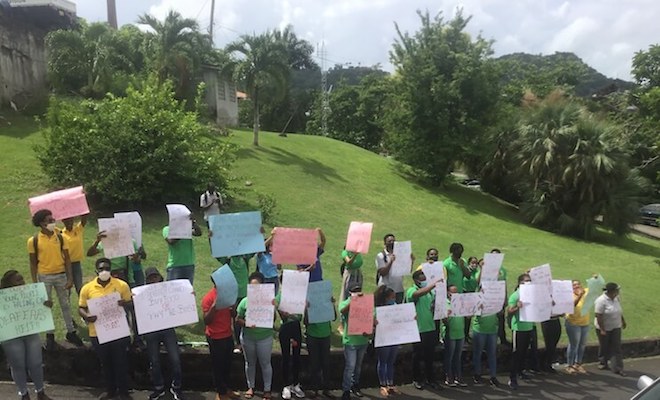 Students of the T.A Marryshow Community College (TAMCC) in Grenada have accused the Minister for Education, Emmalin Pierre of betraying and abandoning them as they struggle to resolve problems with their exam grades.

On Friday, they picketed the Ministry of Education building in the Botanical Gardens in St. George demanding action from Minister Pierre who earlier this week said Grenada would not join other regional countries in criticising the results from the Caribbean Examination Council (CXC) and the 2020 CAPE.

Student leader Donan Noel, a year two student said there are many discrepancies with their grades in multiple subject areas and they need the support of the Minister of Education to take on CXC.

He said, “We paid for a full exam, we received half the exam and then … we were met with results that were not ours. Students feel betrayed, students feel discouraged, angered at the fact that we were left alone.

Among those protesting were Island Scholars Tiara Joseph and Carina Blanche – both are concerned that they will miss out on scholarship opportunities and university placement as a result of the poor grades they received from CXC.

It is discrepancies such as these that the College students want Minister Pierre to address with CXC but earlier this week Pierre had said students were free to use the paid facility available to them to review their grades.

The students say they can hardly afford to pay US$30.00 for each subject they want reviewed by CXC.

During Friday’s protest an aide to the Minister of Education delivered a message that Pierre would meet with a student representative and a lecturer at midday.

Student Leader Noel said if the Minister is not willing to take their side against CXC their protest will not stop.

“Our protest cannot be quelled if our grievances are not addressed, so unless the Minister is planning to listen to us, to give us a chance to explain ourselves and to side with us – because it is a fact that this is not a Grenada problem, around the region this is a problem that has been felt by CAPE students and they have been helped by Ministries around the region – why is it that our Ministry in Grenada is not on our side?

Noel went on: “We are scared, we are angry, we are trying to understand how this will affect our futures”.

According to Noel, the stance taken by the Grenadian leadership on such an important issue regarding their future is not surprising to them.

“We should not be looking to other countries’ ministries to speak for us – Grenada should speak for Grenada. Support should be for us, from us but we are not receiving the support of our own.”